In the months since hurricane Maria hit the island of Puerto Rico, a small Northeast Indiana city is feeling its aftermath in a unique way. The hurricane has caused a number of Puerto Ricans to relocate to Indiana.

Columbia City’s current population is about 8,500 and it’s mostly white.

But the number of Hispanic and Latinos is going up, as Puerto Ricans take advantage of a job transfer off the island and are now creating a home in Columbia City.

Warsaw-based Zimmer Biomet is located about 29 miles west of Columbia City. They also have a plant in Puerto Rico. After Hurricane Maria, Zimmer asked some of their Puerto Rican employees if they would relocate to plants in the continental U.S., like the one in Warsaw.

“We’re really kinda of insulated in Columbia City. Which is weird but we are very, very white, English- speaking individuals here in Columbia City," Daniel said. "We have had very few individuals from... we’ll say other cultures or other languages, that have moved here to Columbia City. So this actually provides both a challenge and an opportunity for us.”

Daniel added, that when a new group of people move into a community like Columbia City, it does stir up conversations, especially on social media.

“But, I will say the vast amount of discussion that we have had, easily 20 to one, has been very positive. Just helping people to understand the what, when, why, where and how," Daniel said. "What we have heard back is people saying hey I’m not great at Spanish but I know a little bit and I’d love to help if I can.”

One of those residents ready to help is Richard Gerber. He works at the local YMCA and now has a new role.

“I guess I’m the teacher, I guess that’s my title and I also work here at the Y as a wellness coach,” said Gerber.

Gerber found out about the new residents after watching the local news one night. The next day he was approached by his boss.

“She met me out in the lobby here and said, 'Richard, I have a question for you. You know a lot of Puerto Ricans are moving here?' And I said, 'Yeah I just saw that.' And she said, 'How about teaching English for us?' And I said sure.”

He has some thoughts about whether the community is ready, for the change, the new residents could bring.

“Some people have a problem with these 'immigrants' coming here to live off of welfare and take our jobs, well no. They are coming with specialized jobs, they are American - United States citizens," Gerber said. "They are just transferring and they are going to be contributing to the economy here and certainly to the culture.”

Mercy Stella Gonzalez Perez is one of the new residents that is now calling Columbia City home. She arrived in January and lives with her dad and her dog in an apartment complex.

“We came here with other several families. We live in the same place. Some live in Warsaw. We are all pretty close. We got to know each other better here," Gonzalez Perez said. "The rest of my family, such as my mom, my brother and my grandmother they still live in Puerto Rico. We are expecting my mom to come here maybe in the summer or next semester hopefully but as of now it’s just me and my dad.”

Gonzalez Perez is from Ponce, Puerto Rico. She recently graduated from college and is continuing her studies. Her dad works for Zimmer Biomet. She found work at Coesse Elementary school as a paraprofessional where she helps Spanish-speaking students that are learning English. She says things have gone well so far, but there will always be challenges.

Mayor Daniel says they’re rolling out information making sure the community is informed and welcoming to the new residents.

“We thought it was very important to just inform the community, first of all, who these families were. Good hard working families. And these are American citizens. You know that’s one of the biggest misperceptions that we really had to fight was Puerto Rico was not a part of Mexico, let’s start there OK, Daniel said. "Puerto Rico is an American protectorate. So we had to overcome those barriers, but certainly as the mayor of a small community it’s my job to be a cheerleader.”

During the initial wave, about 50 Zimmer employees relocated to Indiana. A second wave of Puerto Ricans is expected to arrive after spouses and children move to Columbia City this summer.

The city says it is ready. It has translated city documents and tpark information, even flyers promoting the new centro acuatico, or aquatic center. 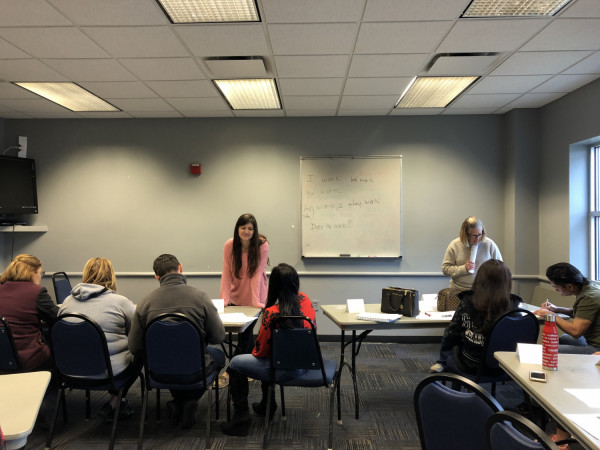 Tags:Hurricane MariaZimmer BiometColumbia City
Support independent journalism today. You rely on WFYI to stay informed, and we depend on you to make our work possible. Donate to power our nonprofit reporting today. Give now.

The utility that provides electricity for much of northern Indiana is seeking a 16.5% rate increase, saying the rate hike would help it modernize its electrical grid and make other improvements.
Read More