The News and Tribune reports Clark County commissioners on Thursday night voted unanimously to extend the program for another year. The program now will be up for renewal at the end of August 2018.

Clark County Health Officer Dr. Kevin Burke says he believes the discovery of new cases of hepatitis C, a disease spread through sharing needles, shows the exchange is justified. The newspaper says about half of the 150 participants have hepatitis C.

Burke says officials plan to work on ways to improve the return rate of syringes. Of the nearly 16,000 clean syringes distributed, the exchange has collected almost 8,000.

Earlier this week in Madison County, council members approved an ordinance removing funding for the county-run needle exchange program started there in 2015.

Tags:needle exchangehepatitis CClark County
Support independent journalism today. You rely on WFYI to stay informed, and we depend on you to make our work possible. Donate to power our nonprofit reporting today. Give now. 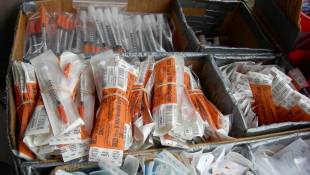 One of the first Indiana counties to implement a syringe exchange is now the first in the state to effectively shut its program down.