Medicaid spending on three important medications used to treat opioid addiction increased 136 percent nationwide between 2011 and 2016, according to a new report from the Urban Institute, a public policy think tank based in Washington D.C. The increases were much higher in some states -- in seven states, rates rose more than 400 percent.

The authors of the report draw a parallel between the Affordable Care Act’s Medicaid expansion and spending on buprenorphine, naltrexone and the overdose antidote naloxone, saying it has brought addiction treatment to previously underserved populations.

“What we saw was this gigantic, rapid, ongoing expansion in treatment,” says report co-author Lisa Clemans-Cope. “It was particularly fast after 2014 when the big Medicaid expansion came into play. There’s definitely an effect of people getting access to treatment—that’s the primary driver of growth of spending.”

The findings come at a time when the future of Medicaid hangs in the balance. The Obamacare “repeal and replace” bill currently before the Senate would place a cap on federal Medicaid dollars and gradually phase out the Medicaid expansion. The nonpartisan scorekeepers at the Congressional Budget Office estimate the bill would result in 15 million people losing their Medicaid coverage.

As an olive branch to opioid-ravaged states, certain congressional Republicans have floated the option of adding an extra $45 million to the bill earmarked for states to use on opioid treatment. The current Senate version offers $2 billion for the states to use in 2018.

Clemans-Cope says neither of those amounts are going to make up for a loss in Medicaid spending.

“Either the $2 billion or the $45 billion that have been bounced around are really nothing compared to the treatment needed,” she says. “When you look at rapid expansion in spending—it’s hard to tell at what point the need would be satisfied.”

The Urban Institute report states spent nearly $1 billion on medications for treatment alone in 2016. And those aren’t the only health costs by any means. Harvard health economics professor Richard Frank told NPR the cost of treating opioid addiction could be as high as $180 billion over ten years, taking into account other forms of treatment and related health care needs.

The Senate bill not only proposes to eliminate the expansion but also to change Medicaid to block-grant style payouts.

Ben Bennett, a policy and research analyst at the Indiana Council of Community Mental Health Centers, says the Senate plan could potentially reverse any progress that’s been done to treat addiction.

“The danger of just giving states big block grants is they can prioritize those dollars wherever they want,” he says. “Certain populations like the addiction population may be overlooked.”

Bennett thinks there have been multiple factors feeding into the increase in addiction medication spending. For example, an increase in stigma is slowly contributing to more people seeking treatment. Still, he says Medicaid expansion is most likely the largest contributor to the increase in spending in Indiana, adding Indiana’s expansion made addiction treatment available to people who had no way to pay for it before.

“I’m certain the ACA absolutely helped increased access to medication, and that’s a big chunk of why you’re seeing the numbers skyrocket,” he says. “A lot of folks with addiction issues don’t necessarily come from the best of circumstances and they might need to rely on Medicaid and other social infrastructure. It’s not surprising you see Medicaid dollars increase alongside.”

The Urban Institute report also highlighted different growth rates among addiction-treatment  medications, drawing from state-by-state drug utilization data from the Centers for Medicare & Medicaid Services. The vast majority of the Medicaid dollars were used to purchase buprenorphine, which reduces cravings in people with addiction. However, purchase of naltrexone (which prevents cravings) and naloxone (which can reverse the effects of an opioid overdose) grew at a far more rapid rate, with naloxone spending increasing 90,205 percent since 2011.

Because the Urban Institute only collected prescription data on buprenorphine, naloxone and naltrexone and not methadone, another opioid treatment, spending is actually even higher than reported, said Clemans-Cope. (Methadone treatment is not reported in the CMS data the organization used in the report.) It also only looked at prescription medication spending and didn’t account for dollars utilized for, for example, therapy or other co-morbidities that occur alongside addiction, such as HIV or Hepatitis C.

The story was produced by Side Effects Public Media, a news collaborative covering public health. 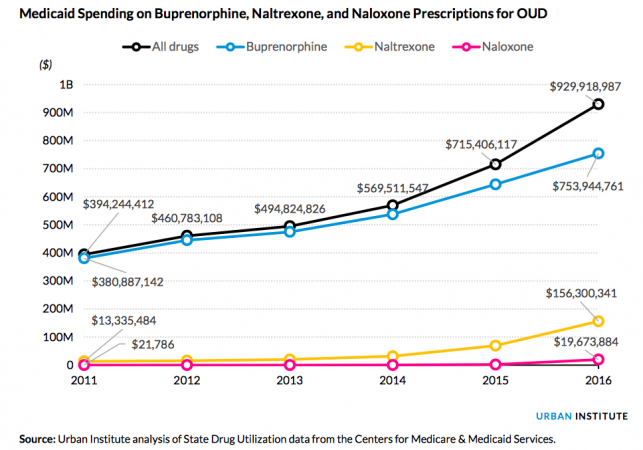 Tags:MedicaidUrban Instituteaddictionopioid epidemic
Support independent journalism today. You rely on WFYI to stay informed, and we depend on you to make our work possible. Donate to power our nonprofit reporting today. Give now.