Indiana farmers are filing complaints about a controversial herbicide, dicamba, that’s allegedly drifting from neighboring fields and damaging their crops.

Monsanto, DuPont, and BASF all released dicamba tolerant soybeans for this planting season. The herbicide is reportedly causing problems, says Dave Scott, the pesticide administrator for the Office of the Indiana State Chemist.

“You can suffer potential crop damage and potential yield loss,” says Scott, “because your beans are being impacted by what your neighbor applied to their beans.”

As of July 19, farmers have filled 66 complaints that allege their crops have been damaged by dicamba. Scott says that’s “a lot” of complaints, especially for one product in a two to three-week period.

The Office of the Indiana State Chemist is investigating the complaints. They say it could be months before investigators can determine if the reported crop damage was caused by dicamba, and whether applicators used the product correctly.

In a statement, Monsanto says it’s critical “that farmers follow all local rules and label requirements.”

Meanwhile, the Indiana Pesticide Review Board is considering making dicamba a “restricted use” herbicide, which would require farmers to keep more detailed records of how they use the product. Scott says those records would help his office investigate the complaints more quickly.

Several other states are also dealing with dicamba complaints, including Missouri and Tennessee. The State Plant Board of Arkansas voted to ban the herbicide in June.

Farmers can file herbicide drift complaints with the Office of the Indiana State Chemist.

Tags:AgricultureherbicidesMonsantodicambaOffice of the Indiana State ChemistIndiana Pesticide Review Board
Support independent journalism today. You rely on WFYI to stay informed, and we depend on you to make our work possible. Donate to power our nonprofit reporting today. Give now. 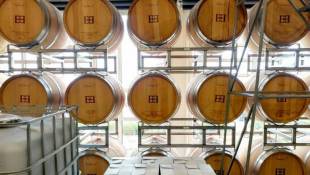 Limited by climate and regulations in their grape choices and retail options, Indiana's growing number of wineries are nevertheless finding ways to stand out.