Estimates show most rural Indiana counties will lose a significant portion of their workforce by 2040 and state policy makers are taking notice.

Blackford County in northern Indiana is set to be the hardest hit—the study estimates they could lose nearly 40% of their workforce population. 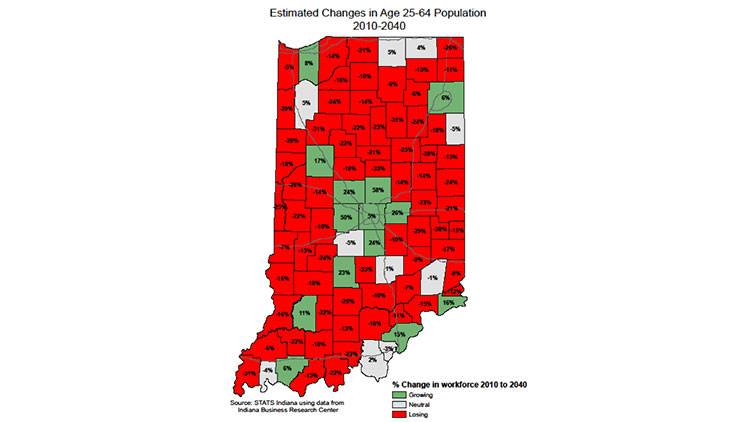 This map from 2016, shows much of the growth centered around urban cores. (Courtsey, Indiana University Public Policy Institute)

That’s why the state is trying to help those communities improve what’s called quality of place.

The term is broad, but includes investments that help make a location more livable, like new trails, shopping, venues for the arts and restaurants.

Indiana’s Office of Community and Rural Affairs plans to funnel $100,000 in grants to help communities enhance their culture.

Colette Childress is a Project Manager at OCRA. She says she’s confident state resources will lead to results.

According to the study only 14 counties are expected to grow their workforce population over the next 25 years—many of which surround large metropolitan areas.

Tags:workforceIndiana Office of Community and Rural Affairs
At WFYI, our goal is to cover stories that matter to you. Our reporting is rooted in facts. It considers all perspectives and is available to everyone. We don't have paywalls, but we do need support. So if unbiased, trusted journalism is important to you, please join us. Donate now.

Lack Of Attorneys Lead To Service Disparities In Rural Indiana