State Money To Clean Up Gasoline Leaks In Indiana Is At Risk: Here's Why

When you pump gas, it comes out of large tanks underneath the station. They often leak — sending gasoline into the ground and sometimes the drinking water.

Indiana reimburses companies that clean up these leaks up to $2.5 million per site — more than any other state in the country. But the state says some companies are taking advantage of the fund and it could be in danger of running out of money.

The Stakes: Your Money, Your Health, And Your Environment

Greg Cobb and his family own six gas stations and convenience stores in the Warsaw area. Last year he received a copy of a bill showing how much a company he hired was getting reimbursed to clean up contamination at one of those stations. It was for $650,000 and Cobb says the work wasn’t even done.

“I was pretty shocked. I was shocked when I saw how much they had already spent and hadn’t really gotten anywhere,” he says.

Cobb says he fired the company and hired a new one — though the work still isn’t finished.

Cobb is on the board for the fund that reimburses consultants — the Excess Liability Trust Fund — but he says most gas station owners likely aren’t concerned.

“Most people in the convenience store or own tanks go, ‘Well, it’s not a big deal, it’s not my money,’” he says.

The problem is, it’s mostly tax payer money they’re spending. For every gallon of gas that goes into your car, you pay a penny into a fund for cleanups.

If there’s not enough money, these gas tank leaks could put Hoosiers’ drinking water at risk. Gasoline can contain harmful chemicals like benzene — one of the few chemicals the U.S. classifies as a "known human carcinogen," which means it's been proven to cause cancer.

Last fiscal year, there were more than 170 leaks across the state. 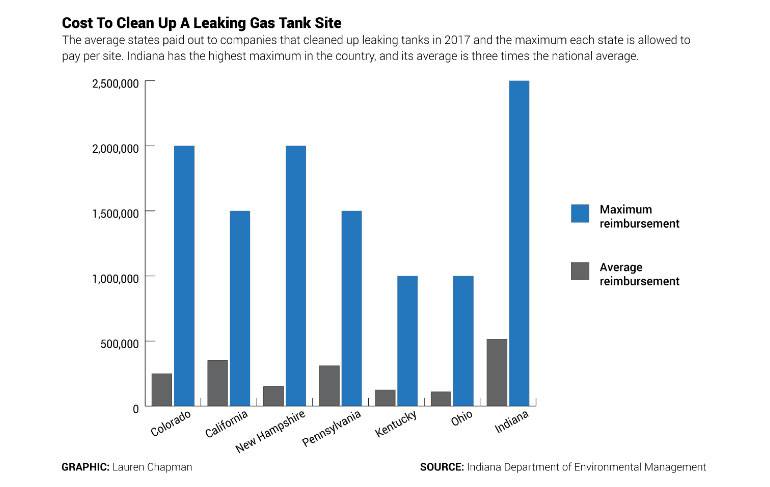 Two years ago, the average cost for cleaning up a tank leak in Indiana was more than three times the national average. But some consultants say, it doesn’t have to cost that much.

Jason Lenz owns Creek Run Environmental in Montpelier.  He says while the state sets wages for employees at companies doing cleanups, it hasn’t set caps on their hours. Lenz says when someone like a project manager, who makes more than $100 an hour, takes his time — that can add up.

“There’s no oversight. IDEM has no recourse to say, ‘Well let me look at your records. How could that be? What’s the problem? Why does it take you longer than this guy?’ All they have to do is say, ‘Well, it just did,’” he says.

So IDEM turned to legislators for help. It helped craft a bill during this legislative session that clarified who can get reimbursed through the fund and how many hours they can get paid for certain tasks. Indiana Senator Sue Glick (R-LaGrange) authored the bill.

"We have some unscrupulous consultants who go out there and contact the new owner and say, 'New owner, you need to be safe. You need to make sure that you didn't have a leak or you don't have an ongoing leak. Let us go ahead and explore this for you and we'll do it for nothing because we can tap the fund," Glick says.

At a state Senate hearing, IDEM’s Chief of Staff Brian Rockensuess said because of abuse and declining revenues, there’s only about $75 million left in the fund.

“If we drop to $25 million, the fund will go into priority payment — and what this means is, we will only pay for claims on sites that pose an imminent threat to human health and the environment,” he says. 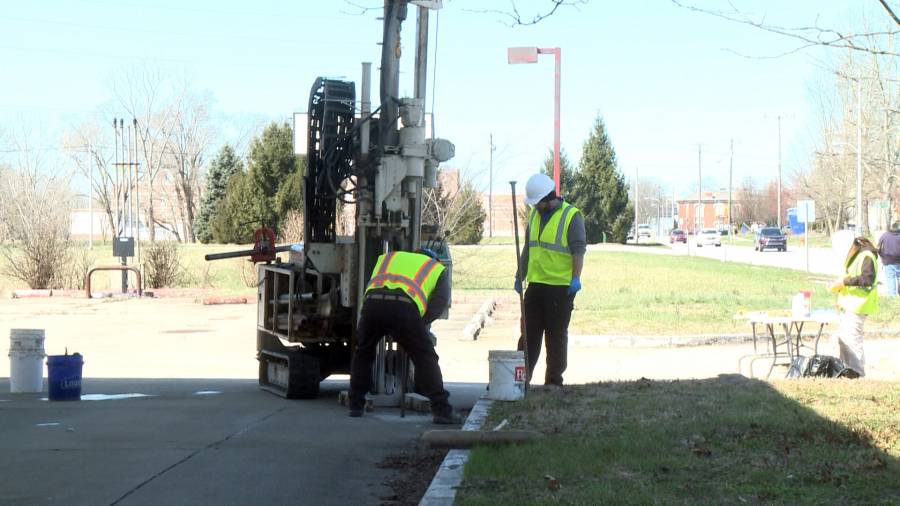 Workers for the consulting firm Creek Run Environmental drill through the concrete at an old gas station site in Columbus to collect soil samples. (Tyler Lake/WTIU)

But while IDEM is pointing the finger at companies doing cleanups, some companies are pointing it right back at IDEM.

Between 2013 and 2017, Golars Environmental Engineering was reimbursed more than $24 million. Most companies in the state spent less than half that amount.

Former Indiana Attorney General Greg Zoeller serves as general counsel for Golars. He says it’s not that the company is charging too much, it’s that IDEM is taking too long to approve cleanup plans.

While they wait, Golars still has to sample monitoring wells to make sure the contamination isn't spreading or moving.

“You have to keep waiting for IDEM to approve the last thing before you move on to the next part of the plan. If it takes a year, that’s going to be four quarterly monitors which can cost anywhere between $5,000 and $10,000," Zoeller says.

Zoeller says it’s not always easy to get the reimbursement rights from the party responsible for the underground storage tank leak either — especially for older sites where oil companies have gone out of business or gone bankrupt.

But most importantly, Zoeller says almost everything Golars does is overseen by IDEM.

“There’s nothing that goes on that isn’t required by the agency,” he says. 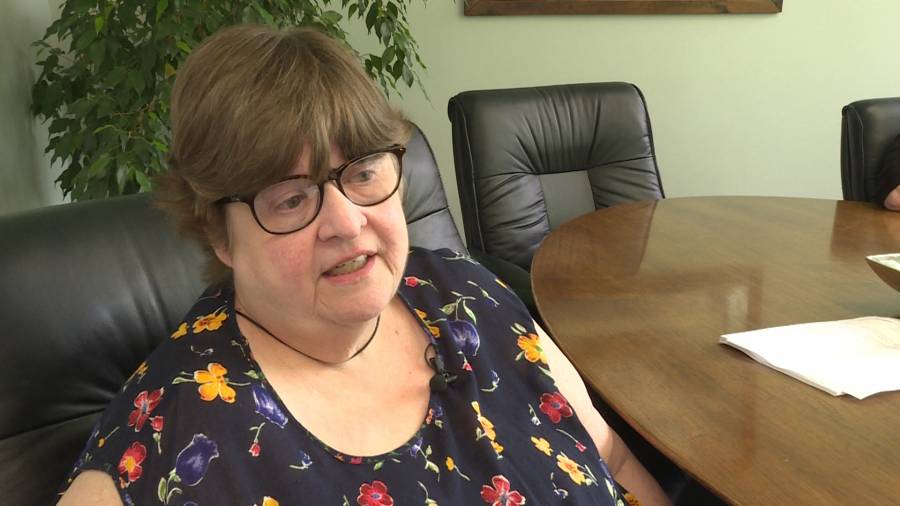 Sue Esserman has been in a lawsuit with the Indiana Department of Environmental Management over why she was fired. (Rebecca Thiele/IPB News)

Maybe IDEM and remediation companies are both to blame for draining the fund. That’s what Sue Esserman thinks. She’s a former IDEM employee currently in a lawsuit with the agency.

Esserman used to review claims until she was fired in 2014. IDEM says it was for poor performance, but she says it was because she refused to rubber stamp costly claims.

“I’m kind of a stickler for details, have been for many years. And if you’re going to be reimbursed for labor hours, contractor costs, supply costs — I would like to see the documentation,” Esserman says.

Esserman says there were all kinds of issues in her department. She says when she was there, there weren’t enough staff members to approve the claims efficiently — and many of them were scientists, who didn’t have the financial background to know what should and shouldn’t be approved.

Esserman says there was a lot of pressure to review and approve claims quickly — so companies doing cleanups were more likely to abuse the system.

At a 2012 staff meeting, Esserman and other reviewers were told to apply “reduced scrutiny” to certain consultants who submit claims — another move to make sure reimbursements got out the door.

“And the rationale for this would be that they were submitting 'good claims.' It was never entirely clear to me how you would describe a good claim,” she says.

Though IDEM completed an actuarial study in 2016, Esserman says to her knowledge the agency has never done a full third-party audit of the Excess Liability Trust Fund that both looks at cost and quality of work.

What’s more, Esserman says the people that make the rules for the fund — the Financial Assurance Board — are mostly from the gasoline and convenience store industries. Right now three seats on the board are vacant, including one for someone who represents environmental interests. 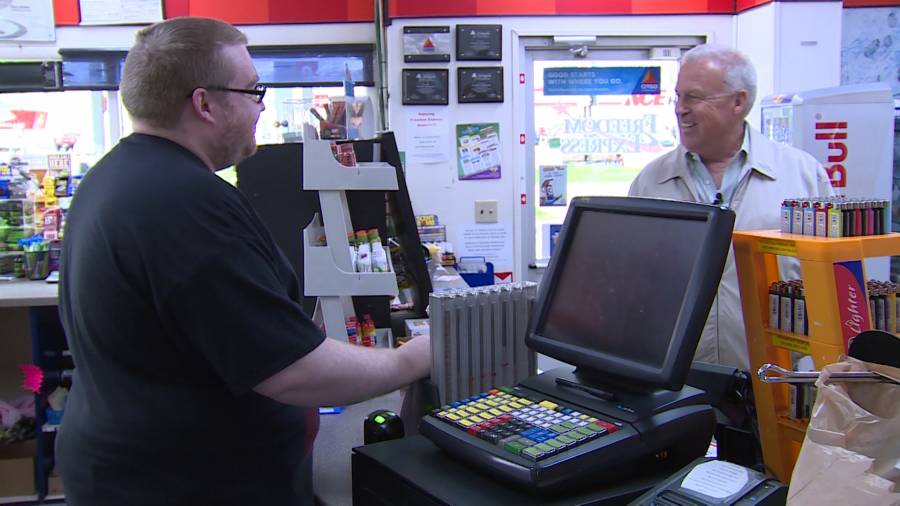 When Greg Cobb started in the gasoline business more than three decades ago, he says the industry was a lot less careful. Gas tanks didn’t have double walls. There were no catch basins for leaks under the pump.

“It wasn’t uncommon for a transport driver to overfill a tank and have it running down the street,” Cobb says.

Many of those old tanks — and the contamination that came with them — are still there today, threatening the health of Hoosiers and the environment. If the money in the fund goes away, it’s unclear if there will be an incentive to clean them up.

IDEM is working to change some of the ways the Excess Liability Trust Fund operates, but the process takes at least 16 to 18 months. Officials with the agency had hoped the Senate bill would've sped up that process.

Tags:Indiana Department of Environmental ManagementgasolineExcess Liability Trust Fund
Support independent journalism today. You rely on WFYI to stay informed, and we depend on you to make our work possible. Donate to power our nonprofit reporting today. Give now.