If college students want a better chance at getting As in their classes, new research says setting goals at the beginning of the semester increases the opportunity to earn better grades.

Victoria Prowse is an associate professor of economics at Purdue University and helped conduct research on how goal setting affected the grades of college students. The study worked with 4,000 students at a large, public university, all taking a required class.

Prowse says they had all students articulate two goals at the beginning of the semester: what grade they wanted to earn and what their goal was for achieving that would be, specifically asking for their goals around practice tests leading up to exams.

Prowse says having a student set a goal of what grade they wanted didn’t necessarily result in achieving that goal. But setting studying goals did help students achieve better grades.

Prowse says the goal setting activity had little effect on the grades of female students, because she says social science finds female students already set goals on their own.

Tags:Purdue Universitystudy habits
Support independent journalism today. You rely on WFYI to stay informed, and we depend on you to make our work possible. Donate to power our nonprofit reporting today. Give now. 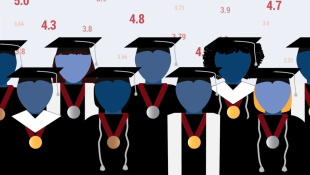 Indiana To Change How It Calculates Graduation Rates