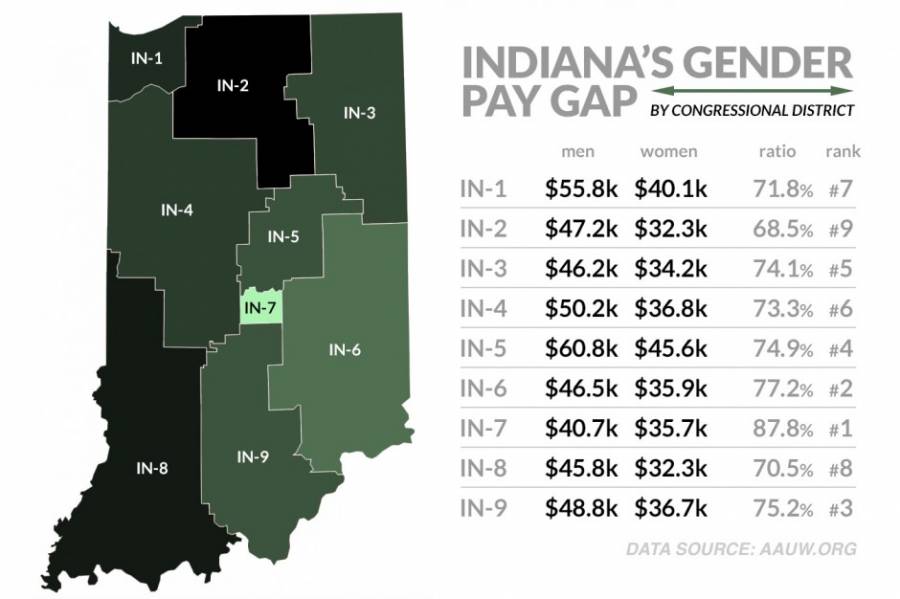 The pay gap figures are from 2016, the most recent available data. The congressional districts are ranked from smallest gap to largest. Graphic: Eoban Binder

A recent study ranks Indiana among the worst states in the country for its gender pay gap.

The American Association of University Women says Hoosier women were paid 74 cents for every dollar men made in 2016.

The study breaks down the pay gap by congressional districts. District 2, which covers the South Bend and Elkhart region, has the largest gap. Women there make only 68-and-a-half cents for every dollar men make. The smallest gap was in District 7, which includes Indianapolis.

Erin Macey, a policy analyst with the Indiana Institute for Working Families, says the gap exists because state laws and policies are inherently unfair toward women.

“Some of the policies that would help address the wage gap include things like raising the minimum wage,” Macey says. “Most minimum wage workers are women.”

Macey says it’s important to change state policies because Indiana’s wage gaps increased by 2 percent between 2015 and 2016. Indiana dropped six spots from 40th to 46th, even though the national wage gap fell.

Macey says the gap can be even wider for female minorities.

“I think it is really important to acknowledge that particular groups of women experience even greater wage gaps and even greater challenges in the workforce,” Macey says.

Macey is working on a report to help state officials identify and understand the sources of the gender wage gap.

Tags:gender pay gapAmerican Association of University Women
Support independent journalism today. You rely on WFYI to stay informed, and we depend on you to make our work possible. Donate to power our nonprofit reporting today. Give now.