INDIANAPOLIS (AP) — The National Weather Service says another night of heavy rainfall has broken a 140-year-old record and made this July the wettest month ever recorded in Indianapolis.

Weather Service hydrologist Al Shipe says the 1.25 inches of rain that fell Sunday night pushed the city to 13.13 inches of rainfall for the month.

That's just above the previous record for Indianapolis' previous wettest month on record, set in July 1875.

Shipe says much of central Indiana has been hit by several deluges this month, extending a tropical pattern that began in late May.

Last month was the wettest June on record for Indiana, but Shipe says the statewide tally for July won't be available for a few more days.

Tags:weather
Support independent journalism today. You rely on WFYI to stay informed, and we depend on you to make our work possible. Donate to power our nonprofit reporting today. Give now. 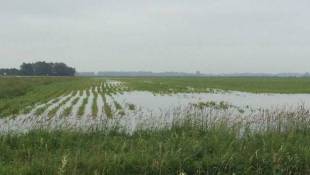