By ANDREW SOERGEL For The Associated Press

ALEXANDRIA, Ind. (AP) — At 79 years old, Art McManus says he's still able to hop on the tractor and maintain the 160 acres of cherry trees at his orchard in Traverse City, Michigan.

His children have gone on to start lives of their own, though he gets some help running his farmers market from his daughter-in-law. But he hires seasonal help to keep the cherry operation moving. "I've been at it all my life," he says. "I enjoy it."

For McManus and many farmers across the country, assistive technology, help from seasonal hires and family members, and a general improvement in the health of U.S. seniors in recent decades have helped them remain productive well into their 60s, 70s and beyond.

Farmers staying on the job longer can restrict land options of younger farmers, making it harder for beginners to crack into the industry, experts say. They worry that without the older farmers, there might not be enough younger people interested in agriculture to support America's food production needs.

"It's a problem," says Milt McGiffen, an agronomist, plant physiologist and researcher at the University of California, Riverside. "There isn't a magic bullet to fix it. And the other problem is you have less people going into ag and you need more food coming out the other end" with a growing U.S. population.

In the U.S. last year, the median age for domestic farmers, ranchers and other agricultural managers was 56.4 years old. That's the highest median age of any major occupation tracked by the government's Current Population Survey for which data was available. The age has ticked up by half a year since 2012, despite the median age of the entire labor force falling slightly over the same period.

Nearly 29% of farmers were at least 65 years of age last year, and less than 13 percent were under the age of 35. Experts say steep equipment costs, limited land availability and competition from older farmers are among the reasons younger workers struggle to establish themselves.

"With the cost of land and equipment, I don't know how you can make it work (as a young farmer). It'll cost $1 million to get into it," McManus says.

Agriculture's age imbalance and the barriers to entry for young farmers have not gone unnoticed by U.S. lawmakers. A House panel plans a hearing Thursday to start addressing the challenges faced by new farmers.

"It's important and it's my job to ensure Congress and this administration hear these stories loud and clear," said Democratic Rep. Abby Finkenauer of Iowa, who leads the House Small Business subcommittee that deals with rural development and agriculture.

With time and money invested in land and equipment, some older farmers are reluctant to cede their operations to younger workers. Technological advancements have made it easier for them to work longer, according to agriculture workers and experts.

"When it comes to machine work, climbing in and out of the (tractor) is about as much energy as it requires to do things. And in terms of steering, auto guidance has just been a freaking game changer," says John Phipps, 71, a commentator for "Farm Journal" and "Top Producer" magazines who maintains more than 2,000 acres of farmland with his son in eastern Illinois.

McManus says cellphones have also been "a big help to keep track of the help and what's going on," though a recent car accident and subsequent back surgery have forced him to more actively consider stepping away from the operation. 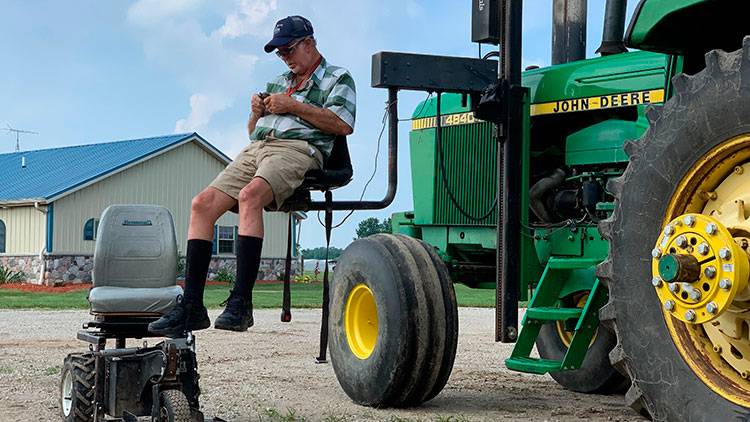 Farmer Mark Hosier, 58, uses a lift to get into a tractor on his farm in Alexandria. Hosier was injured in 2006, when a 2,000-pound bale of hay fell on him while he was working. Assistive technology helped farmers stay on the job. (Andrew Soregel via AP)

Many farmers who need help because of aging or disability, turn to Agrability, a partially government-funded program that helps them more easily maintain their farms. Bill Field, a professor of agricultural and biological engineering at Purdue University and the project director at Agrability's national hub in Indiana, says more than 1,500 consultants were sent to individual farms last year to assess the need and determine what resources might be available.

For farmers with considerable mobility issues, Agrability may recommend equipment manufacturers of assistive technology. For others who are battling arthritis or the wear and tear of age, options include different watering or harvesting methods, rigging additional lighting to tractors for improved visibility. The program also may recommend using more automated equipment or installing handrails to help workers better navigate the farm.

"Our biggest-single call we get tends to be related to mobility because of arthritis and aging," he says. "It's sometimes little things. When you're working in the afternoon, (we tell older farmers to) keep your windshield clean. We lose about a third of our light-capturing ability by the time we're 70."

Field, 70, owns more than two dozen head of cattle and nearly a dozen tractors and says he has no plans to walk away from farm life. He says he isn't surprised by the growing number of older workers reaching out to the program, and he's encouraged older farmers are opting to stick around.

Mark Hosier, a 58-year-old farmer and Alexandria, Indiana, native who farms corn, beans and cash crops while breeding and selling show pigs, called on Agrability after a 2,000-pound bale of hay fell from the forks of Hosier's tractor in 2006, leaving him paralyzed from the waist-down. He's been able to keep his operation running thanks to assistive lifts on his tractor, on the back of his truck and on his combine that he says have been instrumental in keeping him on the farm.

"It does make you feel like a productive citizen. You go out here, and you're earning money."

He likes the fact that he can do it himself and that he doesn't have to rely on others to do his work.

EDITOR'S NOTE — Andrew Soergel is studying aging and workforce issues as part of a 10-month fellowship at The Associated Press-NORC Center for Public Affairs Research, which joins NORC's independent research and AP journalism. The fellowship is funded by the Alfred P. Sloan Foundation.

Tags:Agricultureagingmobility
Support independent journalism today. You rely on WFYI to stay informed, and we depend on you to make our work possible. Donate to power our nonprofit reporting today. Give now.