Eva Mozes Kor recently said she wants her time on this earth to count for something. The Holocaust survivor turned global advocate for forgiveness and healing passed away this morning, and a world of people she inspired mourned.

Kor, who has lived in Terre Haute, Ind., since 1960, died of natural causes in her hotel room in Kraków, Poland. She had been suffering from upper respiratory issues. She was in Poland doing what she enjoyed most: leading one of her annual tours to Auschwitz, the Nazi concentration camp where she was imprisoned as 10-year-old.

The day before, Kor was saluted at the camp by the Los Angeles Children’s Choir, who accompanied her in singing her favorite song, “The Impossible Dream.”

“We are deeply saddened to announce the passing of Eva Kor,” read a statement released by Kor’s CANDLES Holocaust Museum and Education Center in Terre Haute. “The themes of Eva’s life are apparent. We can overcome hardship and tragedy. Forgiveness can help us to heal. And everyone has the power and responsibility to make this world a better place.

“We hope Eva’s story continues to change the lives of those who hear it for many years to come.”

Eva’s son, Alex, was with her in the final moments.

“I am devastated,” he said. “I cannot cry enough to get rid of the pain. But my mom would tell me and others not to cry. Instead, she would want all of us to follow in her footsteps by being good people and trying to make the world a better place.”

In a statement, Gov. Eric Holcomb, who had become a close friend of Eva’s, wrote:

“The world just lost a giant with Eva Kor’s passing. Janet and I loved and adored her. Everywhere she went, Eva brought light into darkness and provided comfort to those in pain unlike anyone we’ve ever met. …

“Her angelic spirit will live on in the countless souls she saved from ongoing confusion and torment. Janet and I are reminded just how blessed we are to have her as a friend. We will miss her laughter, her wisdom and her passion. We call on every Hoosier to look above on this Independence Day and say a prayer for Eva and the family and nation she leaves behind.”

Information on services will be released soon.

Eva Mozes was born on Jan. 31, 1934, in the tiny village of Portz, Romania. Her family were farmers and the only Jews in town. When Nazi forces in Hungary invaded Romania in the early stages of World War II, the Mozes family was ruthlessly persecuted, and in the spring of 1944 they were put along with hundreds of other Jews on a cattle car bound for Auschwitz.

On the Auschwitz-Birkenau selection platform, Eva and her twin sister Miriam were separated from their parents and two older sisters, never to see them again.

Eva and Miriam were allowed to live because they were to be “Mengele Twins” — used in the experiments of Nazi Dr. Josef Mengele in his quest to create a perfect Aryan race. They were experimented on six days a week, including regularly having blood drawn and receiving mysterious injections.

Eva and Miriam were in the camp from May of 1944 until the camp was liberated by the Russians on Jan. 27, 1945. In all, 3,000 individual twins underwent the Nazi experiments, and the Mozes girls were among 200 who survived.

Eva and Miriam lived with their aunt in Romania for five years, and then in 1950 moved to Israel. In 1960, Mickey Kor, a Holocaust survivor from Latvia who had moved to Terre Haute after the war, visited Israel, and he and Eva were soon married. When Eva moved from Tel Aviv to Terre Haute, she said “it was like landing on the moon.”

There Eva and Mickey had two children, Alex and Rina. Eva, however, suffered tremendously as she tried to come to grips with what had happened to her and her family in the Holocaust.

Eva started telling her story to school groups in 1978, and in the 1980s she became a vocal, national advocate for Holocaust survivors. Nearly singlehandedly, she introduced the Mengele Twins to the world, and launched the worldwide manhunt for Mengele, which was at the time considered the biggest manhunt in history.

Her activism and anger often brought scorn, however, even among fellow Holocaust survivors, culminating in her arrest while demonstrating at the U.S. Capitol Rotunda in 1986. And her life bottomed out in 1993, when Miriam passed away from cancer that was tied to the injections she received at Auschwitz.

All of the anger and grief led to a shocking decision, one that would come to define Eva Kor’s legacy.

In 1995, Eva returned to Auschwitz on the 50th anniversary of the liberation to announce that she had forgiven the Nazis. She opened the CANDLES Museum the same year, and ever since she has committed to her life to spreading her messages of forgiveness, healing and inclusiveness.

In recent years her popularity and influence have soared. She has won two Sagamores of the Wabash and Indiana’s highest civilian honor, the Sachem Award, and was honored at the Kennedy Center by the Anti-Defamation League. She has been the focus of several books and two feature-length documentaries, most recently “Eva: A-7063,” and a Buzzfeed video interview of her now has more than 200 million views.

The Indiana Historical Society recently named Eva a “Living Legend,” with the ceremony scheduled for later this month.

While Eva has remained a controversial figure in some circles because of her forgiveness of the Nazis, many of those who disagree with her, including Michael Berenbaum, the world’s foremost Holocaust scholar, stand in awe of the good she’s done for the world.

“What’s Eva accomplished? She’s increased consciousness of the Holocaust, she’s used it as the vehicle to combat racism and prejudice, to argue for human rights and human decency, to educate a younger generation. She’s built an institution that looks like it’s going to take off. What a magnificent contributional life.

“To have come as far as she has come, to have reached the stature that she has reached, is an extraordinary achievement.”

Tags:Eva Kor
Support independent journalism today. You rely on WFYI to stay informed, and we depend on you to make our work possible. Donate to power our nonprofit reporting today. Give now. 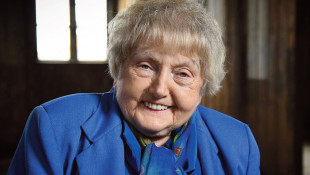 Eva Kor, a survivor of the Holocaust, forgiveness advocate, and public speaker, passed away July 4. She was in Poland, leading one of her annual tours to Auschwitz, the Nazi concentration camp where was imprisoned as a 10-year-old. 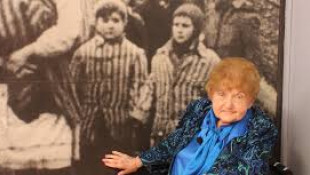 Producer Ted Green, Who Told Eva's Story In Documentary, Reflects On Her Legacy