The Passing Rate For Indiana's Legal Bar Exam Is Declining

Indiana law students are struggling to pass the state’s legal bar exam. A new report indicates the number of students who passed hit a record low in February.

The state reports that just 47 percent of test-takers passed the exam. The passing rate has been declining for several years.

Cathleen Shrader is President of the Indiana Board of Law Examiners, a division of the state’s Supreme Court. She says when the board is looking for trends in the passing rates, they tend to focus on first-time test takers rather than repeat examinees.

Just 26 percent of repeat examinees passed the bar exam this time around. That’s compared to 67 percent of first-time examinees.

The board does allow some exams to be reviewed and re-graded, which could impact the overall pass rate. 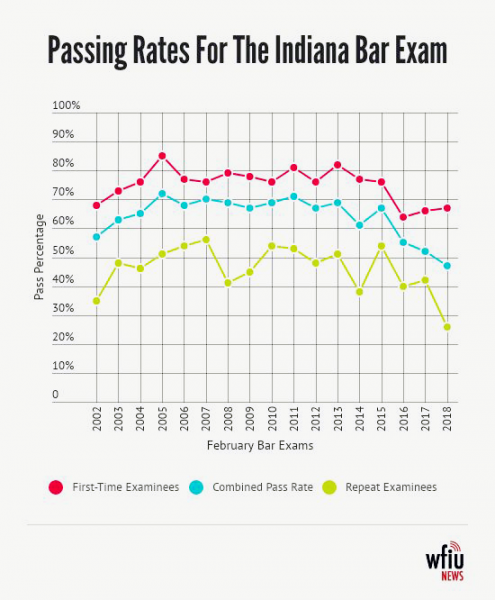 Tags:Indiana Board of Law ExaminersIndiana Bar Exam
At WFYI, our goal is to cover stories that matter to you. Our reporting is rooted in facts. It considers all perspectives and is available to everyone. We don't have paywalls, but we do need support. So if unbiased, trusted journalism is important to you, please join us. Donate now.

More than 100,000 children in Indiana don't have a computer or a computer with internet access at home, according to an analysis of federal data. Use this interactive map to see the rate of access in your school district.
Read More

Students in Indianas foster care system face a much higher expulsion rate and much lower graduation rate compared to their peers, according to a new report.
Read More