President-elect Donald Trump is doubling down on his criticisms of U.S. trade relationships with China and Mexico, which has some wondering if a trade war is in the works.

For example, higher U.S. taxes on Chinese steel imports could make China choose to buy fewer American products, including those from Indiana, like soybeans or engine parts.

But DeBoer says even threat of a trade war is already affecting Hoosiers.

When Trump says he wants to raise taxes on foreign-made imports, currency speculators conclude it’ll mean fewer imports from Mexico – and they bet on less demand for the peso. The peso’s value falls, and the dollar’s value rises.

This increases the price of American products in Mexico, DeBoer says, “which means the Mexicans start looking around for other places to buy their exports cheaper, which means we’re already paying a cost in terms of our exports to Mexico, even before the tariff is imposed to give us the benefit of jobs in the United States.”

Higher tariffs would eventually mean higher costs for companies importing goods to the U.S., but DeBoer says most would cover that by raising prices, passing the cost on to consumers.

Tags:steeltradetrade warAgriculture
Support independent journalism today. You rely on WFYI to stay informed, and we depend on you to make our work possible. Donate to power our nonprofit reporting today. Give now. 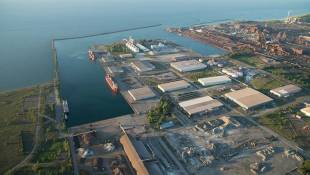 Ratner Steel Supply will double the size of its operations in Portage, adding jobs and expanding its ability to ship steel across the Region.