Labor unions are hoping to gain back some of the power they've lost in Indiana in recent decades by getting out the vote for state and local Democrats in November.

But with a distracting presidential campaign backdrop and an uphill battle to reform state labor policies, organizers are facing a lot of obstacles.

At a United Auto Workers training center in Kokomo, Terri Mutran sits at a laptop, calling members to tell them who the UAW and other unions have endorsed in Indiana.

"Hello, my name is Terri and I'm a fellow UAW member," she recites into her headset. "We're just calling today to ask a couple questions about the upcoming election."

"Go ahead, sister," says the man on the other end of the line.

"Alrighty," Mutran says. "If the election were held today, would you vote for Democrat Evan Bayh or Republican Todd Young in the race for U.S. Senate?"

Evan Bayh, he tells her — and, in the Indiana governor's race, he picks Democrat John Gregg over Lt. Gov. Eric Holcomb, the Republican candidate.

She enters it all in the computer. Indecisive voters will get a call back later on.

Mutran, who works at the Chrysler transmission plant in Tipton, says it's important to stick to a script on these calls — especially this year.

"Sometimes if they're a Republican and they're a Donald Trump fan, they tell you that right from the get-go," she says.

The UAW and most other unions have endorsed Hillary Clinton for president. But phone bank organizer Tina Durham says they aren't bringing up that up yet if they can help it.

"The most important ones, because we're not a swing state, is the local candidates," Durham says.

State legislators, senators and governors can help unions negotiate better benefits with employers. They also control policies that make or break union power, like Right to Work, which lets employees be union members with union benefits even if they don't pay dues.

State Rep. Jerry Torr (R-Carmel) championed the law in Indiana back in 2012.

"The union leaders kept trying to tell their membership that we were trying to 'bust the unions,' and that was never the intent at all," he says.

He notes that Indiana union membership — and overall employment — actually rose in the first few years of Right to Work.

But on the whole, that membership is declining in Indiana and nationwide. It's gotten easier in recent decades for a business to avoid paying extra for union labor by moving to a Right to Work state, or overseas. 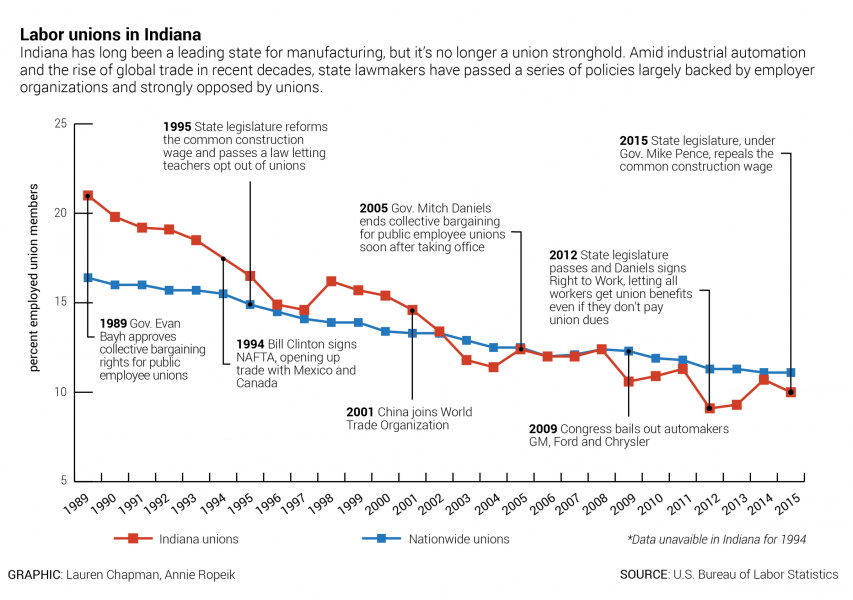 But state Rep. David Niezgodski (D-South Bend) says it will give unions more bargaining power to gain some friends in Indianapolis. And he thinks recent losses will push members to the polls.

Indiana University labor law professor Robert Brookins says unions will have power as long as they vote and lobby, with one caveat:

"Your ability to impose any kind of pressure on employers is going to be directly related to your solidarity and your numbers," Brookins says.

Some say that solidarity has eroded too, and Auto Workers organizer Rick Ward says this year's presidential contest isn't helping.

He thinks Donald Trump's rhetoric about restoring American jobs could split the traditionally left-leaning union base.

"I'm scared," Ward says. "I'm scared that we could lose Gregg and Bayh because of the trickle-down from Trump."

And they're facing opposition at home, too — just this week, the Indiana Manufacturers' Association endorsed Eric Holcomb for governor.

That's why Indiana unions are staying local. On a recent Saturday morning, dozens of union members from around the state — Steelworkers, Sheet Metal Workers and Auto Workers — fanned out across Kokomo to try and get out the vote.

After knocking on dozens of doors, UAW members Scott Russell and Jeff McCombs find Naomi Douglas, an undecided voter who says the first ballot she ever cast was for President Barack Obama.

"Is there any kind of donation or contribution," she asks.

"Nope, we're just out getting the word out," says Russell.

Douglas says she supports Hillary Clinton, and she's seen a lot of campaign ads attacking Evan Bayh, but doesn't know much else about him. She studies the flyers they give her carefully.

And though she still isn't sure if she'll end up voting, or in what races, she does want to know when Election Day is.

It's a small victory for the workers as they walk away. 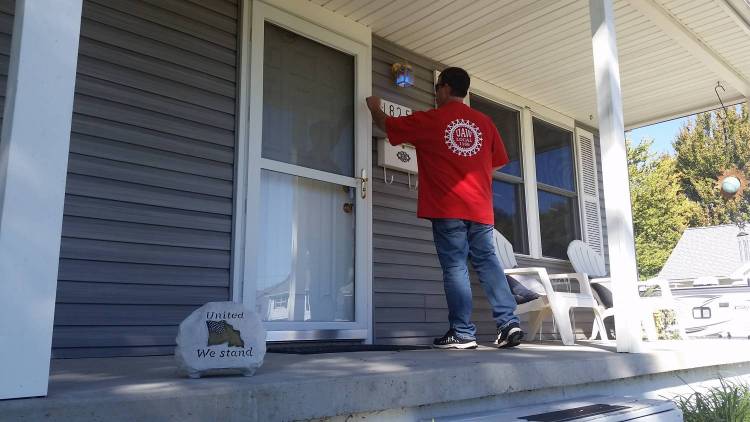 Tags:Election 2016United Auto WorkersUAWvoter turnoutunions
Support independent journalism today. You rely on WFYI to stay informed, and we depend on you to make our work possible. Donate to power our nonprofit reporting today. Give now.