Two bills working their way through the Indiana legislature would increase penalties for farmers and others who misuse pesticides. One aim of the legislation is to stop a controversial weed killer from drifting off of fields and killing neighboring crops.

The state has gotten so many complaints about dicamba drift that farmers must stop applying certain dicamba products on soybeans starting June 20.

Jeff Cummins is the associate director for policy engagement with Indiana Farm Bureau. He says the proposed bills would increase the maximum penalties for misusing all kinds of pesticides — something that hasn’t been done in decades.

“Making sure that we don't lose access to those products. Because there are too many bad actors that are operating and paying the current level of civil penalties just as a cost of doing business,” Cummins says.

A bill in the House would also set up a point system that would increase fines for repeat offenders. The companion bill in the Senate doesn't have this provision.

READ MORE: Despite Efforts To Stop Drift, Dicamba Complaints Up

But some worry the bills could have unintended consequences for those who use pesticides in the lawn care industry.

“The odds of us getting fined grows exponentially in comparison because of the amount of times that we’re out using products,” Yoder says.

The Office of the State Chemist says it will reassess the use of dicamba after the Environmental Protection Agency decides whether to allow the use of the pesticide next growing season.

Tags:2020 legislative sessiondicambaAgriculture
Support independent journalism today. You rely on WFYI to stay informed, and we depend on you to make our work possible. Donate to power our nonprofit reporting today. Give now. 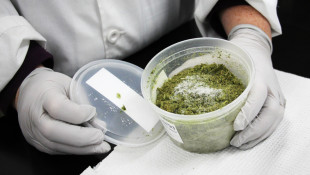 Across the Midwest, millions of acres of farmland have been damaged by dicamba, an herbicide that can damage crops not engineered to withstand it. There are so many cases, regulators can't keep up.