Some Indiana universities are turning to COVID-19 exit-testing ahead of students leaving campus before Thanksgiving. But while some campuses are offering testing as an option, others are requiring it.

The University of Notre Dame made headlines this week, after mandating students be tested for COVID-19 before leaving campus. Students who do not get tested won’t be allowed to register for the spring semester. The move comes after a number of unsafe, off-campus partying took place over the weekend due to the football game against Clemson University.

Spokesperson for the university, Paul Browne, said it was not because students charged the field after Notre Dame won the game.

He said it’s understandable for students to want to celebrate what he called a historic win, for the university. Browne said health officials he spoke to after the game weren’t as concerned with students storming the field, because of the brevity of the moment. However, he said in an effort to keep students who could have been potentially exposed to COVID-19 over the weekend from infecting others, the university decided to up the ante on the consequences for those who choose to not get tested.

In a letter to students from Father John Jenkins, University of Notre Dame president, he details the new rules and procedures for exit testing.

Browne said initially, the consequences for not getting tested included delayed registration for the spring semester.

"We think it’s a reasonable request. It’s a very efficient process. We’re doing it to safeguard students and their loved ones," Brown said. "So we think they should all understand they have to take the test before they register in the spring."

Indiana University will also be offering – but not requiring – exit testing for students at all of its campuses.

Tags:coronavirusCOVID-19COVID-19 testing
Support independent journalism today. You rely on WFYI to stay informed, and we depend on you to make our work possible. Donate to power our nonprofit reporting today. Give now. 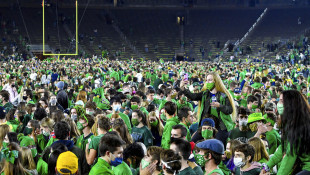