As states move toward reopening their economies, officials are emphasizing the need to expand their capacity to test for COVID-19.

But many say their efforts to ramp up testing are still being hampered by a shortage of supplies. To help fill the gaps, some state public health labs looked to state universities for help.

Labs at Purdue University in Indiana and the University of Wisconsin-Madison, for example, are providing materials and expertise to their states’ public health labs.

And at the University of Illinois at Urbana-Champaign, dozens of lab technicians are working to produce viral transport medium. It’s one of several critical components for COVID-19 testing, and the technicians are producing enough for tens of thousands of tests to be performed weekly at state public health labs.

“I really appreciate the opportunity to have a job amidst this pandemic when a lot of people don’t, and to contribute to helping our public health and medical systems get through it,” says Justin Lange, a research technician working on the project.

While these partnerships are part of the solution to boosting many states’ testing capacity, some involved in the efforts say that without a coordinated federal response, states will continue to struggle to acquire the supplies needed to meet the growing demand.

One Test, Many Components

University of Illinois virologist Chris Brooke, who has been coordinating some of the efforts to produce testing materials, says when he heard about shortages of COVID-19 tests, he was puzzled.

The test involves simple procedures labs that his lab performs on a regular basis. So, what could be so hard?

But once he discussed the issue with clinicians at the local hospital, he says he understood the problem.

“There’s this idea that you just have these testing kits, and it’s just this thing that’s in a box and you have everything you need to test everyone,” Brooke says. “And that’s not really the reality.”

The reality is there are several critical components—and if any are lacking, testing cannot be done.

To collect a sample from a patient, health workers use nasal swabs—long, flexible pieces of plastic that reach into the nose and throat. The swabs are placed into little plastic tubes containing a sterile liquid, known as viral transport media, which preserves the virus’ genetic material until the sample is analyzed.

Once the sample reaches a clinical lab, technicians use anotherliquid to extract genetic material and perform the analysis on high-tech equipment, all while wearing the appropriate personal protective equipment.

If any one of those components is lacking, COVID-19 testing can’t be completed.

The problem, Brooke says, is that many of those materials are in short supply as public health and clinical labs around the world simultaneously work to boost their testing capacity.

Early on in the pandemic, Brooke and his colleagues brainstormed how they could help bolster COVID-19 testing at the local and state level. 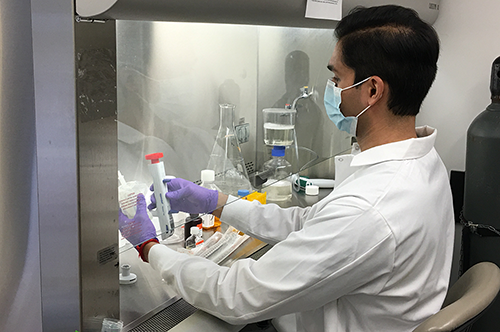 Some University of Illinois labs loaned expensive equipment to a local hospital lab to help with on-site testing. Others began working on designs for nasal swabs.

Brooke decided to work on viral transport media, which is straight-forward but labor-intensive.

Lab technicians dissolve several components into water: nutrients, preservatives and other chemicals. Then, working in a sterile lab environment, they use pipettes to transfer small amounts of the liquid into small plastic tubes.

Brooke says there’s no cost-effective way to automate the process while ensuring all components remain sterile. So a few dozen lab technicians work full-time to produce 30,000 to 40,000 tubes of the medium each week for state public health labs.

The state pays the university for the supplies. One tube is needed per COVID-19 test, so the university’s contribution accounts for more than a third of the state’s current testing output.

A much smaller number of tubes, about 1,000 per week, get sent to the local hospital to support their testing efforts, Brooke says.

Lange, one of the research technicians working under Brooke, says while the monotony of the work is challenging, he finds it meaningful.

He and his socially distant lab mates found ways to make the process more efficient and they pass the time listening to podcasts and talking about news, sports and life.

“I appreciate the kind of teamwork, camaraderie and overall leadership and organization shown by the university… to be used as a local source of aid during this time,” Lange says.

Partnerships During The Pandemic

The COVID-19 pandemic has resulted in more partnerships between state public health labs and universities across the country, says Alana Sterkel, assistant director of the Wisconsin State Laboratory of Hygiene. It’s one of a small number of state labs associated with a university.

“It’s still fairly unique but I feel it’s on the rise,” Sterkel says.

Her lab’s long-standing connection with University of Wisconsin-Madison’s school of public health came in handy in addressing COVID-19.

Sterkel says the state’s public health labs have also been strengthened by partnerships with clinical labs, which conduct the bulk of COVID-19 testing in Wisconsin. “We learn from each other, we support each other, we’re able to share resources in times of need."

These days, the need for resources is great, says Brooke, especially in the absence of a coordinated federal response to boost manufacturing of testing supplies and ensure states can get what they need.

As a result, he says, individual labs must compete with one another.

Brooke recounts a time when he bought a couple months’ worth of supplies but later learned that his purchase forced the vendor to turn away hospital labs seeking the same items.

“That’s an awful feeling,” Brooke says. “I’m glad we have been able to [make COVID-19 testing supplies] and help the state, but I think it’s terrible that … means that some other place is not able to do it as effectively.”

Looking forward, that competition for supplies is unlikely to slow. Testing will be vital to conduct contact tracing and monitor outbreaks, especially as states move toward reopening their economies.

Tags:coronavirusCOVID-19COVID-19 testing
Support independent journalism today. You rely on WFYI to stay informed, and we depend on you to make our work possible. Donate to power our nonprofit reporting today. Give now. 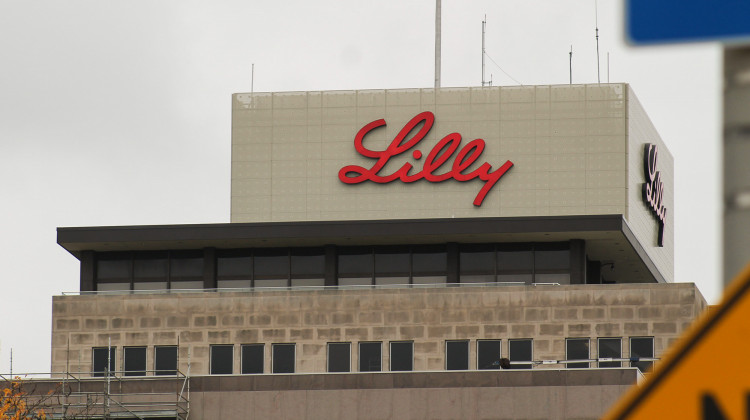 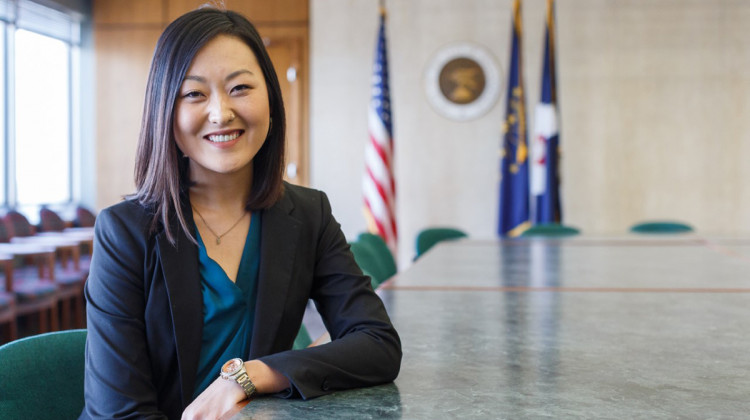 Reaching adulthood brings new challenges new jobs, school, relationships and that can affect a young person's mental health. But navigating the health care system to get help with that is often not easy.
Read More