The research is part of a study commissioned by the Indiana Department of Natural Resources to help wildlife officials in Indiana and across the nation better understand how to manage geese populations in both rural and urban areas.

The research team, led by biology professors Tim Carter of Ball State, and Ben O’Neal of Franklin College, collected and placed tracking bands on several hundred geese on the far east side of the city this week.

“Geese are an important resource to the state and DNR is concerned with the best management possible of this resource,” says Carter. “We need to know a little bit more about what’s going on with these populations, because just removing them doesn’t seem to fix the problem long term.”

According to researchers, this study comes at a time of “historic increases” in permits to kill nuisance geese and is needed to help the DNR change how many geese it allows to be hunted each year. Less than 40 years ago the Canada goose population was nearly zero in Indiana, but that number has greatly increased due to federal and state protections.

The study works by establishing core sites at locations which frequently have geese removed by licensed Nuisance Waterfowl Control Operators each year and placing small identification bands around on the right leg of a large percentage of the geese in the surrounding area.

“We’re going to be banding all the birds within about a mile of our focal area. We have a focal area that we know next year is likely to have some geese removed,” Carter says.

The 4-year study is funded by federal grants to the DNR -- which are financed with revenue collected from excise taxes on hunting equipment, established as part of the Pittman-Robertson Act of 1937. The U.S. Department of the Interior requires all funds from these taxes be distributed to studies like this one, and other conservation efforts.

While the study will be year round, the time between April and July is when the collections are most efficient because the geese can't fly due to their feather molting.

“Hanging upside down doesn’t look great, but it doesn’t hurt them and it actually calms them and gives you more control so you can prevent them from breaking their new feathers that are growing in,” Carter says.

CLARIFICATION: A previous version of this story said the researchers were using geolocation bands. That was incorrect. The bands just have identification numbers on them for tracking purposes. The geolocation bands will be implemented in smaller numbers starting next year. 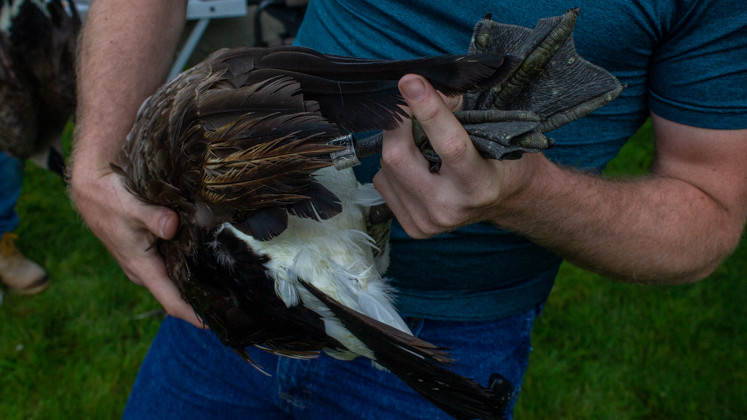 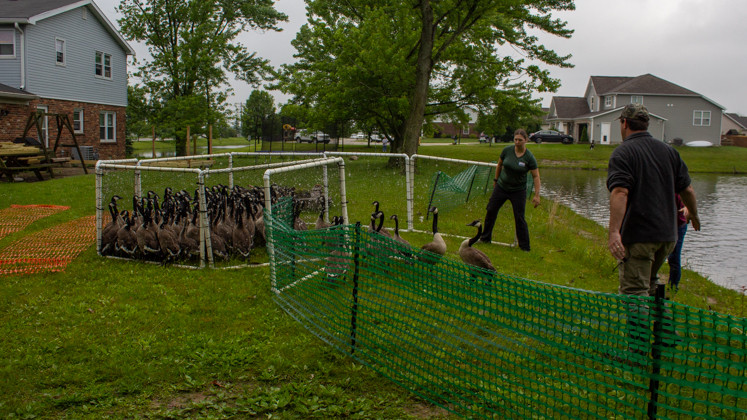 Tags:Canadian geeseBall State UniversityFranklin CollegeIndiana Department of Natural Resources
Support independent journalism today. You rely on WFYI to stay informed, and we depend on you to make our work possible. Donate to power our nonprofit reporting today. Give now.