The U.S. economy added just 151,000 jobs in January while unemployment dropped slightly, to 4.9 percent, according to the latest figures from the Bureau of Labor Statistics.

Economists had expected to see about 190,000 new jobs.

The unemployment rate, which has held steady at 5 percent the past few months, dropped slightly to 4.9 percent. It's the first time unemployment has fallen below 5 percent since the recession.

One bright spot on the jobs report: Wages. Average hourly earnings rose by 12 cents in January, to $25.39. The report says that over the year, wages have risen 2.5 percent overall.

Retail, restaurants, healthcare and manufacturing all gained jobs, the BLS says. But jobs were lost in transportation, warehousing, private education services and mining.

And last month, the Commerce department reported that GDP growth had slowed to 0.7 percent.

Tags:unemployment rateU.S. economy
Support independent journalism today. You rely on WFYI to stay informed, and we depend on you to make our work possible. Donate to power our nonprofit reporting today. Give now.

Indiana-based Tire Rack is being acquired by Discount Tire 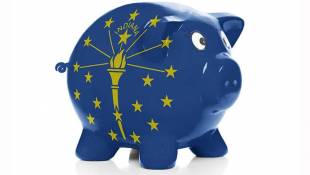 Last month's state tax collections edged above projected levels as Indiana began the second half of its fiscal year.