Adams spoke Friday to an audience that included members of state legislatures across the country, an event that kicked off with a performance of elementary school children singing "Lift Every Voice" — considered by many the Black national anthem.

Adams said race and class play a role in how communities respond to the opioid epidemic.

“Here’s the challenge for all of you in this room. We need to make sure when policies are implemented to address the opioid epidemic, they’re implemented in an equitable way,” he said.

He gave the example of diversion programs, such as drug treatment courts, that give some defendants the choice of jail or treatment. He said too often, these programs make decisions about who gets in based on someone’s chance of succeeding at recovery.

For example, those with family support systems and resources such as housing are sometimes favored for treatment.

“The affluent and the non-minorities are going to be the ones that have the best chance of being successful and the minorities and the less affluent are not,” he said.

Adams challenged the audience to support programs that use their resources equitably to give everyone suffering from addiction a chance at recovery.

Adams played a key role in the state’s response, and health workers credit Adams with persuading Pence to legalize syringe exchanges to contain the spread of the disease.

Since he was appointed U.S. Surgeon General, Adams acknowledged he’s been criticized for working with President Trump.

“What I would say to everyone in this audience is if you don’t agree with what’s going on, how are you going to change it if you’re not in the room?”

He said he applauds the president for declaring the opioid epidemic a public health emergency and pushing federal agencies to find additional funds to address the crisis. 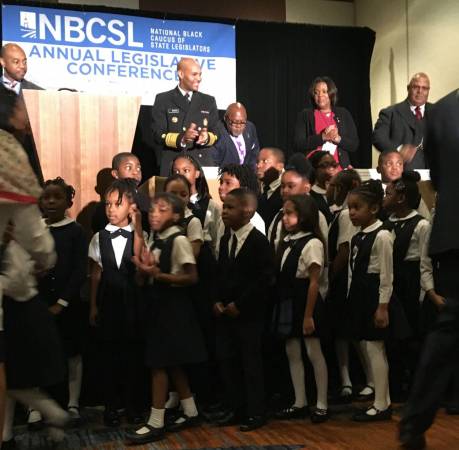 Tags:Jerome AdamsU.S. Surgeon GeneralNational Black Caucus of State Legislators Conference
At WFYI, our goal is to cover stories that matter to you. Our reporting is rooted in facts. It considers all perspectives and is available to everyone. We don't have paywalls, but we do need support. So if unbiased, trusted journalism is important to you, please join us. Donate now.

In a Facebook post, the second-term representative said the governor's "unilateral" COVID-19 restrictions have put her family's business in serious jeopardy.
Read More

Within the next decade, nine coal plants in Indiana are expected to close or partially shut down. While that may mean cleaner air, it can also have repercussions for the towns that host these plants.
Read More