As of this week, 70 percent of the state’s corn has been harvested – compared to 85 percent at this time last year. That’s even though, according to the U.S. Department of Agriculture, wet conditions have forced farmers to focus on corn instead of completing soybean harvests.

Indiana State Climatologist Dev Niyogi says the current weather patterns aren’t inconsistent with what he expects this time of year.

Niyogi says because of the weather’s variability – such as the last week, when temperatures fluctuated more than 20 degrees – farmers should pay attention to localized forecasts.

Still, Niyogi says the wetter conditions don’t pose that much of a threat.

Associate State Climatologist Ken Scheeringa says farmers have harvested well into December in the past, and crops are are unlikely to deteriorate in the field until after the New Year.

The USDA reports warmer temperatures were expected to be good for planted winter wheat, but heavy rain stopped much field activity. Livestock are reported in good condition. 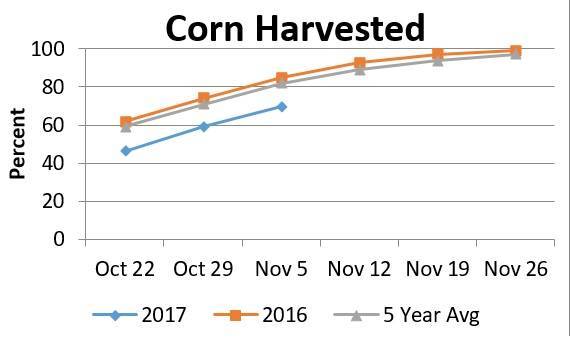 Tags:Agriculturecornsoybeansharvest
Support independent journalism today. You rely on WFYI to stay informed, and we depend on you to make our work possible. Donate to power our nonprofit reporting today. Give now.