RICHMOND, Ind. (AP) — An eastern Indiana coroner says his county this year already has passed the total number of opioid deaths recorded during all of last year.

Stevens says Wayne County's overdose problems are so bad that he received a state grant that pays $250 toward testing to identify the presence of certain drugs.

The coroner says five of the deaths this year are attributed to an elephant tranquilizer called carfentanil, which is an analog of the synthetic opioid fentanyl. He says it's one of about 70 fentanyl analogs that have been seen.

Tags:Wayne Countyopioidsopioid overdosefentanylopioid crisis
At WFYI, our goal is to cover stories that matter to you. Our reporting is rooted in facts. It considers all perspectives and is available to everyone. We don't have paywalls, but we do need support. So if unbiased, trusted journalism is important to you, please join us. Donate now. 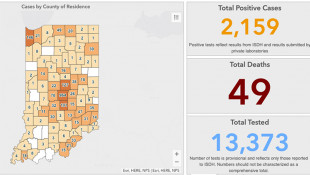 Five of the state's 14 new deaths involved Indianapolis residents and four others were from Lake County. There was one death each reported from Elkhart, Decatur, Hancock, Ripley and Warren counties.
Read More