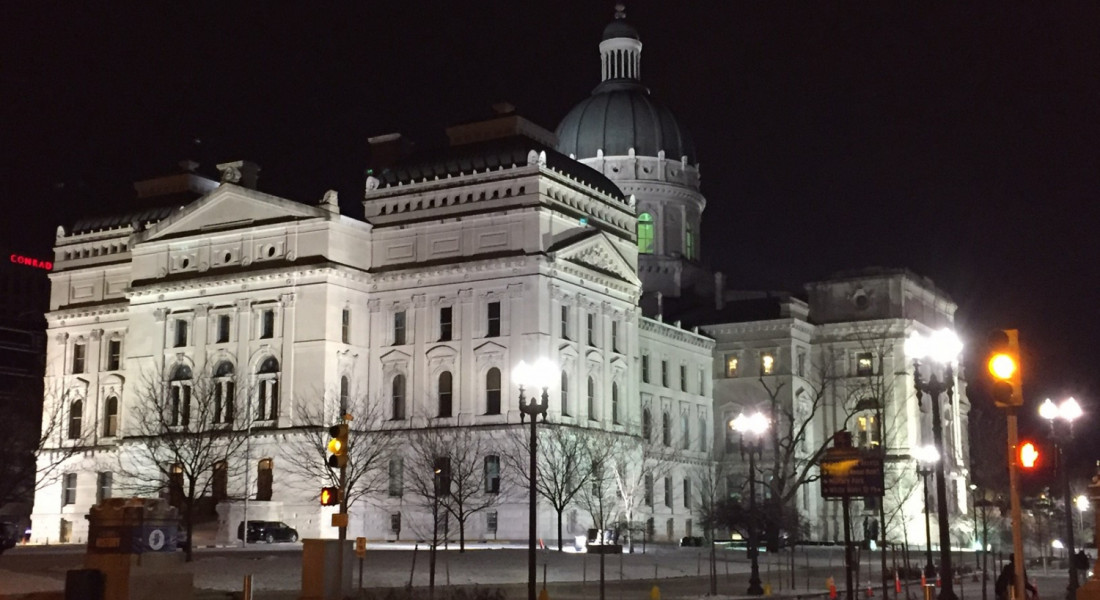 A “historic” police reform bill clears committee. The Holcomb administration unveils the governor’s state budget proposal. And an education funding guarantee is moving in both chambers.

Here’s what you might have missed this week at the Statehouse.

A House committee unanimously approved legislation this week that makes several police reforms – supported by law enforcement agencies and groups that include the Indiana Black Legislative Caucus, the NAACP and the Indiana Black Expo.

Among the changes: banning chokeholds unless deadly force is warranted, requiring de-escalation training and making it easier for the state to de-certify police who commit misconduct (essentially preventing them from remaining employed).

Gov. Eric Holcomb’s proposed budget would spend $1.13 billion over the next two years to largely pay down state debt – and almost none of that money would be direct relief for Hoosiers struggling during the pandemic.

Holcomb’s proposed state budget does increase K-12 funding by $377 million over the next two years – that's an increase from current spending of 2 percent in the first year and an additional 1 percent the second year.

Indiana Republican legislative leaders aren’t totally sold on Gov. Eric Holcomb’s proposal to spend nearly three-quarters of a billion dollars this year to pay down state debt instead of direct relief for Hoosiers struggling during the pandemic.

Holcomb’s proposal would spend $702 million out of budget reserves this year to pay down debt on capital projects, highway construction and a teacher retirement fund. That frees up money in the future, long a priority for Republicans.

And legislation on the move in both chambers would ensure K-12 schools get 100 percent of the state funding they were expecting this year – regardless of whether students were learning in-person or virtually.

Senate Bill 2 and House Bill 1003 are nearly identical – they both aim to circumvent a law passed in 2019 that limits funding for virtual school students.

Senate Education and Career Development Committee Chair Jeff Raatz (R-Centerville) says the workaround only affects money that was already set aside for brick and mortar schools in the 2019 budget-writing legislative session.

"There was no new appropriation whatsoever, we're just – we had to change the definition so schools remain whole and the money was already available," he said.

Lawmakers are debating whether to give the General Assembly more opportunities to cancel a governor’s public emergency order.

The legislation, presented Tuesday in a House committee, is a direct reaction to some lawmakers’ frustration with Gov. Eric Holcomb during the COVID-19 pandemic.

Under current law, the governor can declare a public emergency – like the health emergency during the pandemic – for 30 days. There’s no limit on how many times it can be renewed; Holcomb has done it 10 times since March.

Rep. Matt Lehman’s (R-Berne) bill would change that. Under his measure, Lehman said an emergency order could only initially be renewed after 30 days if the legislature is in session or if the governor calls a special session.

“If this is a good order and it needs to extend, the General Assembly is not compelled to act,” Lehman said.

A bill that would give Hoosier workers the right to refuse employer-mandated vaccines had its first hearing in a committee Wednesday morning. It would go further than current federal laws and excuse workers based on their conscience.

Currently, federal laws allow employers to have mandatory vaccine policies but workers can opt out if they have a medical disability or sincerely held religious belief. However, if an employer determines that creates a threat to others, it can "exclude" that employee from the workplace.

Sen. Dennis Kruse (R-Auburn), author of the bill, said it goes a step further and exempts employees from vaccination based on personal choice.

“The word 'conscience' is the essence of the bill,” Sen. Kruse said. “That’s the additional part that is not in existing law.”

A legislative committee hearing this week was disrupted when dozens of people who showed up to testify refused to wear masks – which are required in the Statehouse.

Many wore face masks to enter the building, but then removed them while waiting to support a bill offering personal choice as a valid reason to refuse mandatory workplace vaccinations. Their behavior directly violated published Statehouse safety protocols, however witnesses say there was no enforcement.

Dr. Amy Beth Kressel was prepared to testify in opposition of the vaccination bill for Eskenazi Health, but says she left before testifying to avoid waiting in a crowd of people without masks.

“People were allowed not to wear masks and basically drive opposing people away,” Kressel said. “It’s really disturbing and I really do think it’s a problem.”

“Every day I’m dealing with an issue that we hadn’t thought of or didn’t think of or has just arisen,” Huston said. “So, our teams will work through those issues.”

Republican legislative leaders decided at the start of session not to require lawmakers to wear masks.

A state House bill aims to stop Indiana cities from banning gas stoves and other natural gas equipment in new homes and businesses. Cities in states like California, Ohio, and Massachusetts have passed such ordinances because of climate concerns.

Though natural gas emits less carbon dioxide than coal, producing it can leak methane into the air — which is an even more potent greenhouse gas. As utilities around the country rely more on renewable energy, electrifying homes and businesses could reduce that pollution.

Jesse Kharbanda is the executive director of the Hoosier Environmental Council. He said Indiana has a heritage of favoring local control, yet in the past few years lawmakers have continued to put forth bills that would take control away from cities.

A state Senate bill aims to crack down on farmers and others who deliberately misuse pesticides like dicamba while giving people with minor pesticide violations a break. The bill passed unanimously in a Senate committee on Monday.

The legislation authored by Sen. Jean Leising (R-Oldenburg) was crafted in collaboration with several different industries after efforts to increase pesticide fines failed last year. The Environmental Protection Agency defines a pesticide as anything used to prevent, destroy, repel, or mitigate pests — that includes herbicides.

If not used correctly, the weed killer dicamba can drift off of farm fields and kill neighboring crops. Under the bill, someone who knowingly misused a restricted-use pesticide like dicamba could get a $1,000 fine.

The skyrocketing cost and limited supply of fertilizer, combined with increases in other input costs continues to concern farmers according to the latest Purdue Ag Economy Barometer.
Read More
hey