What Can You Do About Climate Change? Experts Weigh In

A lot of people have been talking about the recent report from the United Nations Intergovernmental Panel on Climate Change — which says in order to avoid some of the worst impacts to human health and the environment, we need to go to zero emissions by 2050. That’s causing many people to ask, “What can I do?”

Ketterson says individual actions matter. She says terrible things will happen — and are happening — as a result of climate change. But whether we warm by less than 1.5 degrees Celsius as the report recommends or warm to 2.0 degrees makes a difference.

"The degree to which the seas will rise, the number of winters where the arctic will be ice-free, the number of millions who will be harmed by inadequate crop production because of drought or excess rainfall. We as a species evolved in one climate and that's the climate that we're adapted to," Ketterson says.

Vote And Reach Out To Your Representatives

Environmentalists don't tend to turn out to the polls — and voters in general don't make as much of a showing at midterm elections like the one coming up this November.  Hamburger says that's caused a lot of people to think that perhaps their vote doesn't matter, when in fact they can make a difference in some of the most fundamental issues in our country at this critical point in time.

Voters can also make sure they're picking the right candidate by asking their stance on issues like climate change and the environment. As for the lawmakers currently in office, reach out to them and let them know that climate issues are important to you.

Hamburger says there are a lot of state and national environmental groups involved in climate action such as the Hoosier Environmental Council, The Nature Conservancy, Sycamore Land Trust, Citizens Climate Lobby, the Sierra Club, the Natural Resources Defense Council, and the Environmental Defense Fund.

"In general, our system is responsive to groups of people who are able to advocate effectively and, of course, in the course of our history in this country many groups have learned how to do that," he says.

Both Hamburger and Ketterson had mixed feelings about marches — such as the March for Science in Washington D.C. and the Rise for Climate Action march in Indianapolis.

"I grew up with marches, I saw them make a difference. I have a certain sense of frustration now that maybe they're not making as much difference as I would have expected when I see the crowds," Ketterson says. "So it's obviously not sufficient, nevertheless it's not unimportant that you gather together with other people and realize that you're not alone."

Ketterson says it's possible that marches may be making a bigger impact than we think, it will just take a longer period of time. Hamburger agreed that marches are useful tools to energize a community, but they need to be followed up by long-term, committed action.

Talk About The Climate And Listen Too

Another way to create change is to get people to think about the climate. After all, climate change isn't the most popular dinner table conversation and certainly not the easiest topic to bring up. Ketterson says your friends and family love you and want to hear your informed opinion — provided you have the facts.

She says she finds it helpful to look back on how people's minds changed during the Civil Rights Movement or attitudes about smoking.

"I didn’t quit smoking when I was young because I thought I’d get cancer. I quit smoking because my friends didn’t want me in their living room if I was going to smoke a cigarette," Ketterson says. "So the social aspect of changing attitudes is just absolutely crucial."

Ketterson says make talking about climate change a habit — when you're talking about something that worries you, mention how you're also concerned about what's happening to the climate. She says listening can be even more important. She suggests finding out what someone's resistance to climate action is.

Ketterson says once you find out what the concern is, be informed enough to say something like: "I understand why you might feel that way, but here's a reason why I feel differently. What do you think about that?"

The internet has a host of listicles on what you can do to reduce your personal footprint. According to a study by Lund University and the University of British Columbia last year, some of the activities with the highest impact are living car-free, taking fewer flights, and eating a plant-based diet. Ketterson says it's important to be self-aware and recognize your energy use.

Thinking about how much gas, water, and plastic it took to make that new shirt you want may make you think more critically about whether or not you really need it. What you buy also sends a message about what you value to corporations.

"I am disturbed by fossil fuel companies and their tendency to interfere with renewable energy sources — but that said, we're the consumers. So they generate the energy, but we use it," Ketterson says.

Hamburger says personal and collective action are by no means exclusive. Some of these personal actions are more attainable to some groups of people than others. Say you live in an area where you don't have access to high quality foods that would allow you to go vegetarian or vegan.

"We have to make strategic decisions on the agricultural front, on the transportation front, on the community planning front that will make it easy for people to make 'the right decisions,'" Hamburger says.

What About Having One Fewer Child?

The Lund University study mentions that, by and large, the most effective way to reduce one's own impact is to have one fewer child. This isn't the first time population control has come up and it's controversial for a host of different reasons.

Hamburger says we're going to have to come to terms with our growing population — and how we are going to feed that population without more negative environmental impacts. He says the UN IPCC report mentions how some agricultural land should be made back into forest — as trees pull some greenhouse gases out of the air.

"At some point the global consumption of the human population will likely come into conflict with the need for land use changes that will help preserve Earth's climate and I think the sooner we individually and collectively grapple with these issues, the better off we'll be," Hamburger says. "At the same time, there are a lot of systemic changes that we can make that don't necessarily involve conflict with religious and cultural beliefs."

Ketterson says she's more comfortable telling people about those changes than whether or not to have one fewer child.

Ketterson says we've often had this narrative of man's dominance over nature, but we need to recognize that we depend on it.

"The need that we have for pollinators so that they perform ecological services that, if they go away, our crops won't be pollinated. Then we won't be eating at a regular rate," she says.

Hamburger says religious communities have started transforming this narrative — almost every major religion has made statement about responsibility to the planet. There are also religious organizations that make this more of a focus, like Hoosier Interfaith Power & Light.

Tags:climate change
Support independent journalism today. You rely on WFYI to stay informed, and we depend on you to make our work possible. Donate to power our nonprofit reporting today. Give now. 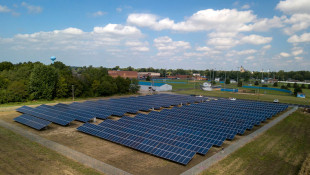 Indiana School District Says Solar Farm Will Save It $2.2M