What Would Ellspermann's Departure Mean For Indiana Republicans In 2016?

INDIANAPOLIS -- Lt. Gov. Sue Ellspermann has emerged as a candidate to lead Ivy Tech, and Gov. Mike Pence is encouraging her to seek the position. But, what are the potential effects of such a shift less than a year before the gubernatorial election?

Ellspermann has almost an ideal resume to lead Ivy Tech.  She has a doctorate in industrial engineering and a corporate background in the private sector. She’s led a research center at the University of Southern Indiana and has half a decade’s worth of government experience.  And, as political analyst Ed Feigenbaum notes, the Ivy Tech presidency could be a good spot from which to run for higher statewide office a few years down the road.

“This certainly would allow her to get around the state, build relationships with folks in the business and academic community, build her name ID among younger voters and among those who are just entering the workforce,” Feigenbaum said.

The State Democratic Party suggests the governor is pushing out his second in command because he and Ellspermann disagree about the religious freedom legislation. But both Pence and Ellspermann’s offices deny such a rift.  And Feigenbaum says the LG’s departure could create a beneficial opportunity for Pence.

“Give him the opportunity to add someone to the ticket who could patch up his political problems with constituencies which he needs to regain,” Feigenbaum said.

Feigenbaum says the best timing for Pence would be if Ellspermann leaves before the state party convention in June, allowing the governor to name a replacement without a convention fight.

Tags:Election 2016Mike PenceSue EllspermannIvy Tech Community CollegeIvy TechIndiana Republicans
Support independent journalism today. You rely on WFYI to stay informed, and we depend on you to make our work possible. Donate to power our nonprofit reporting today. Give now. 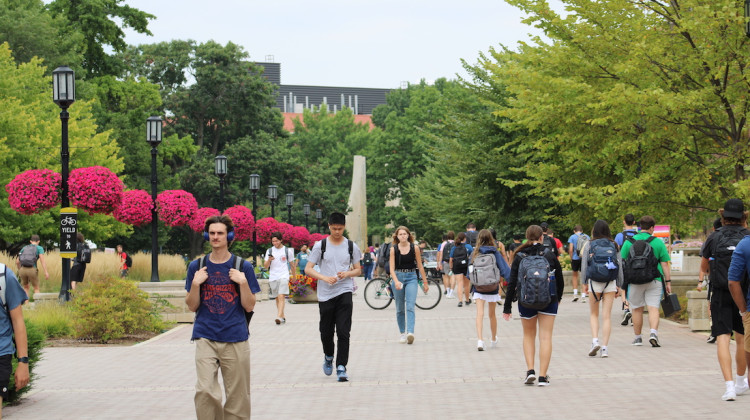 Students react to abortion ban: ‘people are regretting their choice of coming to the state of Indiana because of this’

Immediately after the passage of Indiana’s near-total abortion ban this month, many wondered about unforeseen consequences to health care and impacts on the state economy.
Read More