Why An Ambulance Might Not Be Ready When You Call

In many states, emergency medical services are not considered essential, like fire or police. That means when you call 911, there’s no guarantee an ambulance will respond. And this is a big problem in rural areas, where volunteers are scarce.

Donna Hansen says when her husband started having severe chest pains four years ago, the plan seemed straightforward. Her daughter would drive him to the fire station two miles away in their town of Hudson to get an ambulance.

"She called 911 and then told them I will just meet you ... at the firehouse. They just felt that would save time," she says.

But the plan fell apart when they arrived. Hansen said at the fire station an ambulance was ready with a driver, but no EMT was available.

That meant the department had to call the back up service — a hospital  20 miles away in Waterloo. But Hansen says as her husband’s condition deteriorated, her daughter decided she couldn’t wait. She sped away.

"She was driving 90 miles an hour, she passed every car that she came up on, you know, put her life in danger, too," Hansen recalls. "At one time her dad said to her, 'You need to be careful because you're going to kill us both.'"

Hansen drove to meet them, and the ambulance, at an intersection seven miles from her house.

"They came off the interstate here," she says, returning to the spot. "And then right here on this corner, right here is where they actually loaded him [into the ambulance] ... ."

Hansen says her husband of three decades, Tim, passed away at the hospital. Now, she wonders if the delay in emergency care made a difference.

"Time is essential with with things like this, and I think we all know that there's truth in that," Hansen says. "So him not getting the care that he needed at the time could have completely changed everything." 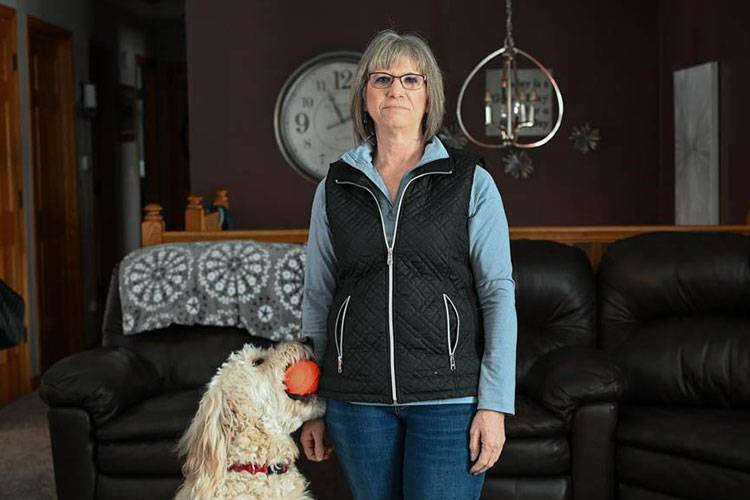 Hudson, Iowa resident Donna Hansen has lived alone with her two dogs Elliot and Auggie since her husband, Tim, passed away nearly four years ago. When Tim had a heart attack, there was not a local EMT available to drive him to the hospital. (Natalie Krebs?Side Effects Public Media)

Sachen estimates that three-fourths of local departments in Iowa are volunteer-run. And because the service isn’t guaranteed by local or state funding, many get their money from billing patients or throwing bake sales and pancake breakfasts.

"We've gotten by for a long time on that, on that model, but I think we're to the point now where the demands on the system are far exceeding the available resources available to provide those services," he says.

The numbers are grim. Iowa has seen a 4 percent decrease in the number of registered EMTs in the past five years. Fourteen counties are covered by just one ambulance service while one -- Worth County -- doesn’t have any for its 400 square miles.

This is a problem nationwide. According to a report by the North Carolina Rural Health Research and Policy Analysis Center, more than two-thirds of EMS directors have a problem retaining and recruiting volunteers.

"It's at the crisis stage," Sachen says. "Latest numbers that I've seen, there's almost 22 percent decrease in the number of new EMTs being certified in the state, which is continuing a downward trend for the last number of years.”

In the town of Tripoli, about 30 miles north of Waterloo, EMS director Kip Ladage has just a handful of EMTs to cover 99 square miles in Bremer Co.

"From six in the morning to six at night we've probably have two, maybe three, if we’re lucky that are available," he says.

Ladage says staff shortages in neighboring areas can create a domino effect. "What if Tripoli can't cover and Denver is already out and can't cover. Then where do we go? Then that response time just gets that much longer." 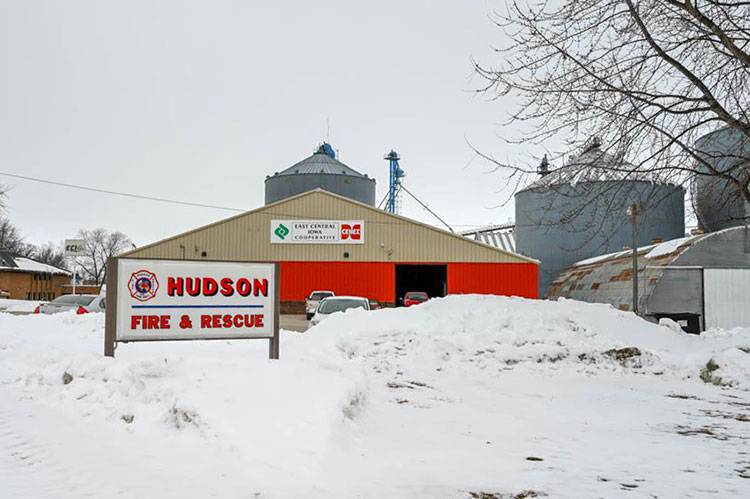 Rural EMS departments like the one in Hudson, Iowa are often strapped for volunteers. (Natalie Krebs/Side Effects Public Media)

In Wright Co., local official Karl Helgevold says they reached a breaking point in 2016 when one of their small towns stopped its service.

"It was always, you know, the elephant in the room that no one wanted to address," he says . "I think it really came to a forefront when our city of Dows closed their ambulance service, and they weren't able to provide it anymore. It's like, 'Wow, this is really happening.'"

In 2018, voters overwhelmingly approved a property tax levy making the county the first in Iowa to declare emergency medical services as essential – and fund it.

The levy raised a half-million dollars a year for training, equipment and a countywide EMS coordinator. But Helgevold feels EMS is something the state needs to ensure. Under current Iowa law, the county's levy sunsets in five years.

"Would it be great if the state had a way to mandate it and fund it in a perfect world?" he says. "Yeah, but we don't live in that type of world right now. So ... we need to go and provide good service to our citizens."

One proposal in the Iowa legislature would make it easier to follow Wright Co.’s example. It would allow counties to set up partnerships and use existing local taxes to fund EMS without voter approval.

State Rep. Bobby Kaufmann, a Republican from Wilton in the eastern part of the state, is sponsoring the legislation. He says EMS is a priority for him this session.

"Rural EMS funding is probably the number one issue in my district," he says. "Our ambulance services are struggling to make ends meet, putting pancake breakfast together just to fulfill their budget."

But Kaufmann doesn’t think the service should be declared essential at the state level, like police and fire, because it could impose a cookie cutter set of requirements.

"I still think it should be done county by county because there are different mechanisms that work for different areas, he says. "And I think it's particularly important that you don't force EMS as an essential service on some of the urban areas that might not need that right now.”

But Kauffman also is asking the state to appropriate about $5 million towards EMS departments.

Tags:rural health careEMSemergency medicine
Support independent journalism today. You rely on WFYI to stay informed, and we depend on you to make our work possible. Donate to power our nonprofit reporting today. Give now. 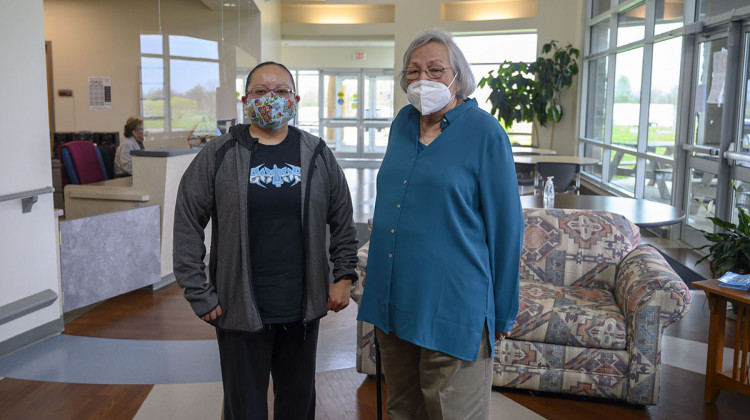 Around the nation, demand for the vaccine overall is decreasing. But many Native American tribal communities are ahead of the rest of the country when it comes to getting COVID-19 vaccines. And, one place in Iowa is getting close to herd immunity.
Read More 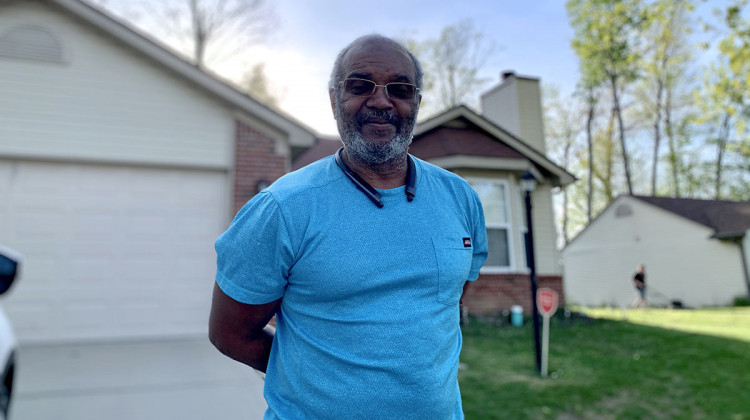