Why does Indiana have so many billboards advertising out-of-state marijuana dispensaries?

If you’ve taken a road trip in the past few years, you’ve definitely spotted the billboards dotting Indiana’s interstates and highways advertising cannabis dispensaries in Michigan and Illinois.

They beckon Hoosiers across those state borders into the land of legalized marijuana — and some are undoubtedly making the trip.

For example, the Michigan towns of Niles and Buchanan — just across the border from South Bend — have eight dispensaries between them, selling to both medical and recreational customers.

And in 2021, the Michigan marijuana industry made $1.79 billion in sales. According to a March 2020 Michigan State University study, the industry has the potential to reach $3 billion in sales in the next few years — bringing a total economic impact of $7.8 billion.

The numbers are similar for Illinois — in 2021, the industry there sold $1.38 billion worth of marijuana, with an average of $4.4 million per day in December.

Some of those dollars are definitely coming from Hoosiers. But marijuana is still not legal in Indiana — so how are all these dispensaries able to advertise here?

Daniel Orenstein is a visiting assistant professor of law at Indiana University–Purdue University Indianapolis. One of his research areas is marijuana law and policy.

He said there’s a lot of history in America of businesses setting up just across the border when something is illegal in one place but legal in another — think casinos in Nevada or liquor stores just outside of dry counties.

And he said advertising is protected by the First Amendment. There are regulations limiting what and how something can be advertised — think tobacco companies or alcohol — but billboards are generally less restricted, and there’s a lot of legal precedent surrounding advertising across state lines.

“The courts have generally said ‘Well, if it’s legal where the action will occur, that’s OK — even if you hear this radio ad across the border.’” Orenstein said. “But we’ve never done that for something that’s federally illegal, like cannabis is.”

Thirty-seven states have legalized medical marijuana, and 18 have legalized it recreationally. But federally, it remains in the most restrictive Schedule 1 category — same as heroin or LSD.

“That is really strange, and it makes it hard to interpret the precedent that we have for advertising rules,” he said. “Here, we’ve got far more questions than answers.”

That means advertising is currently one giant gray area, like almost everything else in the legal marijuana industry.

And Orenstein said that means dispensaries advertising in Indiana are taking a risk — local governments, the state or the federal government could theoretically block it.

Still, it could be worth the risk.

“Businesses take risks all the time,” Orenstein said. “And this might be worth it for them.”

The Indiana Department of Transportation has pages of regulations governing the size, types, location and placement of outdoor advertising.

But the agency does not regulate advertising content. In an email, INDOT spokesperson Mallory Duncan said the agency only looks at content to determine if a sign is advertising something located on the property — like a restaurant or hotel — or something off of the property, like a billboard.

Instead, the agency refers any complaints about advertising content to the Indiana Attorney General’s Office.

So, Orenstein said billboard advertising by dispensaries may be an ‘ask forgiveness, not permission’ type of situation.

“My guess is that no one said, ‘No you can’t do it,’ and so folks have done it,” he said. “And they won’t stop until they're told that they can’t.”

How — or even if — that happens remains to be seen.

But another major factor is what’s actually in the advertisements. For example, it’s perfectly legal to put up a billboard saying ‘Hey, Michigan legalized marijuana, and Indiana should too.’

“Does that advertise that you could buy marijuana in Michigan? Sure, but not directly,” Orenstein said. “The content here is really gonna matter.”

A good example of that distinction is just outside of South Bend.

Currently, drivers heading north on State Route 933 near the Indiana Toll Road will pass a massive billboard advertising a cannabis dispensary about 15 minutes away in Niles. 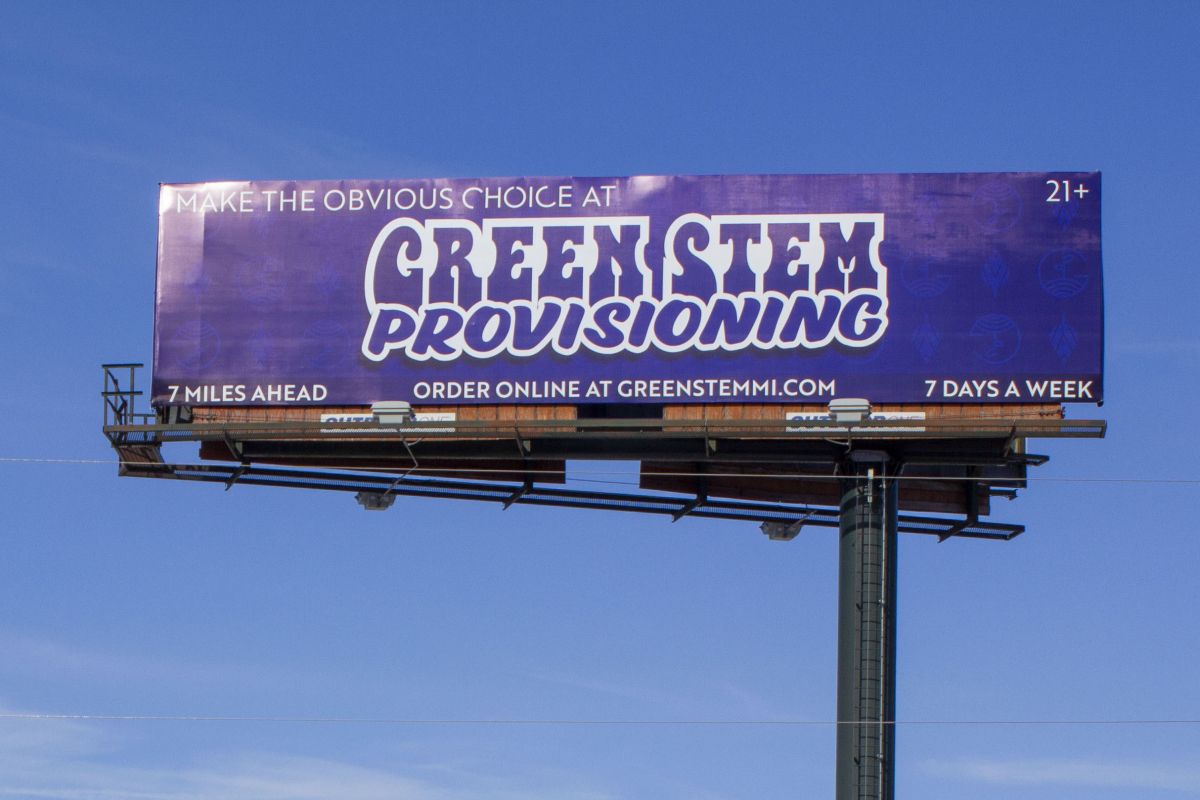 It tells drivers to “make the obvious choice at Green Stem Provisioning,” which is a 21+ business located 7 miles ahead open 7 days a week. It also includes a URL, telling drivers they can order online.

Well, order what? The billboard doesn’t actually say you can buy marijuana there — it’s all just implied.

Compare that to a different billboard on the same highway about 4 miles north. 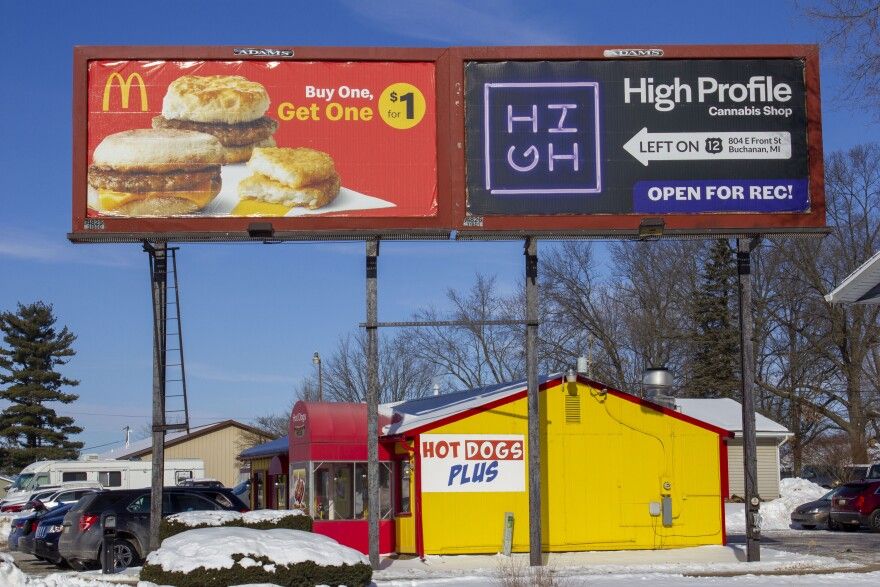 It advertises “High Profile Cannabis Shop,” a dispensary located in Buchanan, and proudly proclaims that it is “Open for rec!”

The difference? That billboard is located in Michigan.

In Orenstein's opinion, the Indiana billboard seems “intentionally vague in ways that probably minimize the legal risk” because it just advertises the existence of the store.

“‘Make the obvious choice’ is pretty open to interpretation,” he said.

In contrast, he said the Michigan billboard High Profile Cannabis Shop would be more likely to trigger a legal fight in Indiana.

I reached out to Green Stem for an interview, but compliance manager Liz Ridgeway said via email that the company did not want to discuss its “marketing efforts in a non-cannabis friendly state.”

But in an unrelated interview with WVPE several months ago, Ridgeway said Green Stem sees customers from all over — including Indiana.

“Being in this area of southwestern Michigan, northern Indiana, you're really at a crossroads in the country,” Ridgeway said. “So, we see Indiana, Illinois, Ohio, Florida. I mean, we see people from all over.”

And, Ridgeway said, their customers are from all walks of life.

“Common misconceptions that we get that people you know, who smoke weed don't have jobs, and they're not contributing members to society — it's absolutely not true,” Ridgeway said. “We see people who are very successful, we see moms, we see dads, we see coaches, professors.”

And Hoosiers would have no problems purchasing marijuana in Michigan, Orenstein said.

“What you do in Michigan is essentially none of the Indiana government’s business,” Orenstein said. “What they can, and do, regulate is what happens when you come back to Indiana.”

In sum, federal law is the main thing that makes out-of-state advertising, and the rest of the marijuana industry, such a gray area.

And that gray area would go away, Orenstein said, if the federal government legalized marijuana — even if Indiana never did so.

In that case, dispensary advertising would be covered by all the past legal precedents surrounding advertising across state lines.

And federal changes could come soon — Orenstein said they’re currently more possible than any time since the 1970s, when the controlled substances act was passed.

But how big of a change is really up in the air. Marijuana could be moved to a lower schedule but remain a controlled substance like many prescription drugs, which would come down on the side of medical use.

The heavier lift would be going completely unscheduled, like alcohol or tobacco. But he said it could happen.

“There’s going to be some changes,” Orenstein said. “Two years, I don’t know. Five years, that looks very possible. Ten years, I would put money on some significant change.”

On the state level, he expects Indiana would go for medical legalization, if anything. But it’s more likely the federal government does something first.

Either way, the billboards are probably here to stay.

If you appreciate this kind of journalism on your local NPR station, please support it by donating here.