Why scientists are looking for clues about coronavirus variants in wastewater

Offshoots of the omicron coronavirus variant have driven a spike in cases in the U.S. Some scientists believe clues to how these subvariants emerge lie in wastewater, and tracking them down could help prevent the next dangerous strain of the virus.

Marc Johnson, a professor of molecular microbiology and immunology at the University of Missouri, is one of the researchers leading the hunt for bizarre mutations of SARS-CoV-2, the virus that causes COVID-19. His lab gets more than a hundred wastewater samples each week from places as far afield as California and New York.

Johnson’s lab filters the samples for the virus. They then extract its genetic material and sequence it to look for oddities.

“The part of the genome we focus on is called the receptor binding domain,” Johnson said. “That’s where most of the mutations accumulate."

By focusing on the part of the virus that lets it infect our cells, Johnson can look for mutations that might help it get around our immune system. Each dangerous variant so far, such as delta and omicron, had significant mutations in that area.

Wastewater testing allows researchers to get a sense of how the virus is spreading – without having to sequence a bunch of individual tests. They can even see warning signs of a surge based on what’s turning up underground.

Beyond looking for strange new variants, Johnson and his colleagues are trying to figure out where exactly the variants are coming from: essentially, the virus’s family history.

But to hunt down these so-called cryptic lineages, they have to narrow down the source of the virus. Instead of sampling a wastewater treatment plant that might contain material from hundreds of thousands of people, Johnson can sample one specific manhole.

To do that, he and other scientists are increasingly using a surprising, but practical tool: tampons.

Kendra Maas, who heads the University of Connecticut’s Microbial Analysis, Resources, and Services lab, has been using the technique to monitor COVID outbreaks on campus. She’s the one who shared the approach with Johnson. 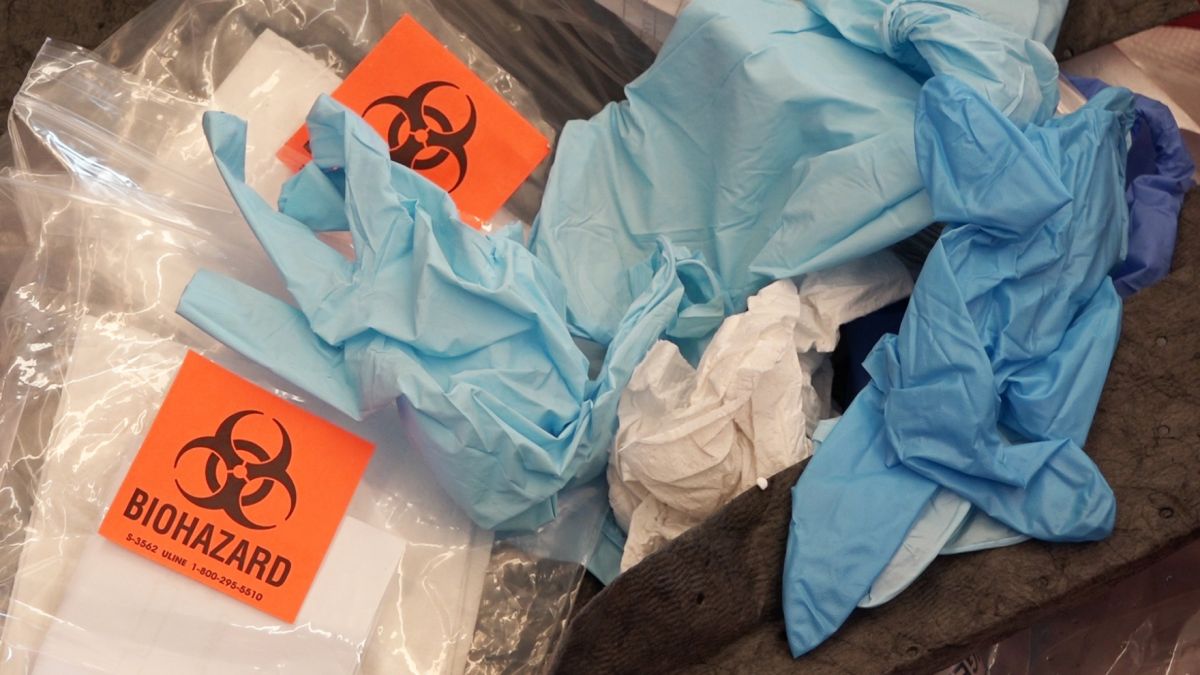 “It’s so simple! When I say we tie a fishing line to a tampon and throw it in the sewer, that is literally all it is,” Maas said.

Maas has done research comparing the technique to other methods of sampling that require expensive machinery and found it to be largely on par. That means researchers can sample in remote areas, or places where it would be inconvenient; like a busy city street in New York.

New York is exactly where one of Johnson’s colleagues, Queen's College virologist John Dennehy, has been working to track down bizarre SARS-CoV-2 mutations.

“We were able to narrow our variant to a small area of Brooklyn,” Dennehy said. “Unfortunately within that area there’s still hundreds of thousands of people.”

Finding where these cryptic lineages are coming from is important, he said, because it could help head off the next dangerous variant at the source.

Researchers think these variants might develop in immunocompromised people who are infected for a long time. Since their bodies can’t deal with the virus quickly, the virus is given a chance to mutate to get around their immune response.

David O'Connor, a professor of pathology and laboratory medicine at the University of Wisconsin who has worked on sequencing SARS-CoV-2, has seen patterns that could support that hypothesis.

"[The viruses] have all of these features that look like they are under a selective pressure from a host’s immune system," O'Connor said. "They are changing exactly in the way that you would expect viruses that would potentially be worrisome in the future to change."

If viruses are mutating in immunocompromised people, finding them and treating them could nip the problem in the bud. But researchers aren't the ones who can quarantine someone with one of these mutated viruses and get them treatment. That's up to public officials, and Dennehy worries they aren't clued in.

“I kind of wonder how much the public health authorities are aware of these cryptic variants being a potential source of a new variant of concern,” Dennehy said.

One highly mutated omicron variant — BA 2.121 — is now contributing to a new spike in COVID in the U.S.

There’s no indication yet that the subvariant causes more severe disease than earlier forms. But Johnson said omicron has outperformed previous variants when it comes to producing offshoots, and tracking them will be critical to potentially controlling them.

This story comes from a reporting collaboration that includes KBIA and Side Effects Public Media — a public health news initiative based at WFYI. Follow Sebastian on Twitter: @sebastiansings.

Tags:omicronCOVID-19coronavirus
Support independent journalism today. You rely on WFYI to stay informed, and we depend on you to make our work possible. Donate to power our nonprofit reporting today. Give now.