Dr. Darla Hinshaw walks up to the podium in the Indiana Senate chamber. She's there to tell lawmakers about the children she treats as a psychiatrist and the issue standing between kids and effective treatment.

She tells a story of a foster care teenager who was admitted into a facility on a Friday.

"He continued to be aggressive," Hinshaw says. "He punched walls, easily irritated into aggression."

When his Department of Child Services caseworker was reached on Sunday, the teen started a new medication.

"So on Monday, when we can reach the insurance companies, they stated they'd no longer cover his care," Hinshaw says. "Because he wasn't saying that he wanted to kill himself, and he hadn't assaulted anybody for 24 hours."

So the facility released him.

In Indiana, lawmakers, hospital administrators and parents are raising concern over the way children on Medicaid receive mental health treatment. They say state policy creates a revolving door of children seeking care, which can be costly and dangerous.

This is the scenario that has sparked concern: A child or teen is admitted for a short-term stay at a mental health facility. After three days, including weekends, hospitals must ask Medicaid insurers to pay for for additional days. And they say that’s frequently denied, so the young patients are discharged if hospitals or parents won’t cover the cost.

Harsha Behavioral Center in Terre Haute, Indiana, is tucked into a field, with a home improvement store across the street. Its floor to ceiling windows, courtyards and bright colors might not conjure images of a typical mental health facility, which is exactly what CEO Roopam Harshawat intended.

"There's so much dysfunction in their families that you can't even imagine," Harshawat says. "They have been sexually abused at a very young age, or they have been physically abused."

"When these kids are discharged prematurely, they come right back," Harshawat says. "And readmission rates are very high because of that."

In Indiana, four companies provide health coverage for Medicaid patients via contract with the state -- Anthem, CareSource, MdWise, and Managed Health Services. The companies declined to make someone available for an interview.

Harsha sees children who have suicidal thoughts, or are harming themselves, siblings or even parents. Some are as young as 3.

"Bottom line is if these kids are treated early you can prevent addiction as adults, you can prevent them from becoming convicts, or relying on government benefits for the rest of their lives," Harshawat says.

He says at his clinic, Deaconess Cross Pointe, additional days are denied at much higher rate when patients are insured via Medicaid as opposed to commercial insurance.

"We're using the same physician, the same criteria, the same reviewers, the same medical records, but it's yielding much different results when we make that request for a few extra days," Branam says.

The Family and Social Services Administration says state-contracted Medicaid insurers already allow these young patients to exceed the three day minimum stay. The agency says the average length of stay in a mental health facility for someone under 18 is six days.

"I mean, you have a family that adopts a child can't get them help. And then they will just go back to [the state]  and say, 'We can't care for this child,'" Cundiff says. "Then that child ends up back in the system again."

Now, Indiana lawmakers are looking for solutions. One proposal would allow young Medicaid recipients to stay five business days at a mental health facility before insurers can request a review.

Senate Bill 192 unanimously passed the state Senate and has moved to the House.

People in need can call a suicide hotline number at the National Suicide Prevention Lifeline at 1-800-273-TALK (1-800-273-8255) to reach a trained counselor. The national crisis text line can be accessed by texting CONNECT to 741741.

Side Effects reporter Carter Barrett can be reached at cbarrett@wfyi.org.

Tags:Medicaidmental healthmental health care
Support independent journalism today. You rely on WFYI to stay informed, and we depend on you to make our work possible. Donate to power our nonprofit reporting today. Give now. 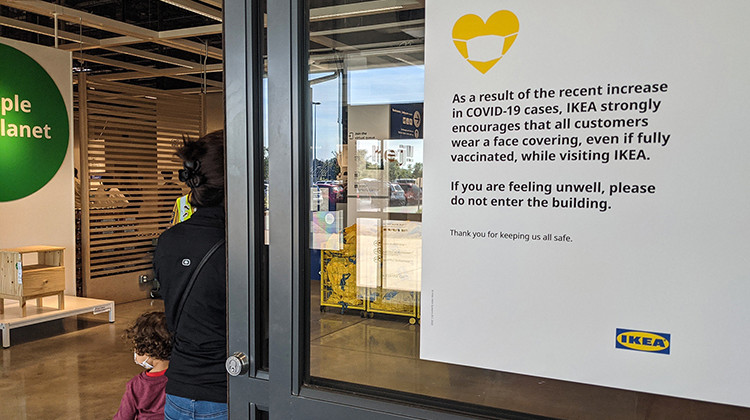 Indiana's COVID-19 cases are slowly declining as experts say the U.S. has hit its peak for the delta variant. The state is opening booster shots to certain groups of Hoosiers who received the Pfizer vaccine. And a new study out of the University of Notre Dame says Black and Brown communities saw disproportionately high non-COVID deaths in 2020.
Read More