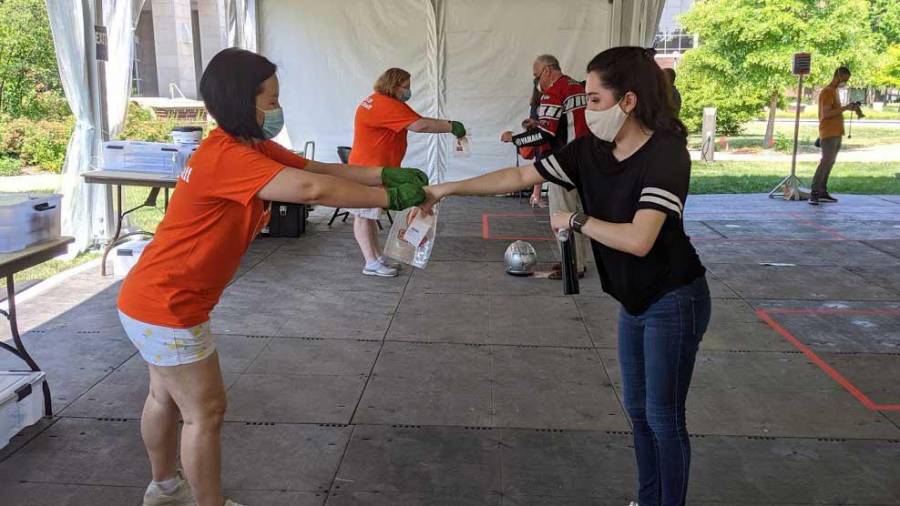 As universities prepare to welcome students back to campus for the fall semester, some are counting on widespread COVID-19 testing to help clamp down on potential outbreaks.

At the University of Illinois at Urbana-Champaign, large white tents, with signs reading “Walk-Up COVID-19 Testing,” have been popping up across campus.

On a sunny summer day, graduate student Kristen Muñoz approaches a table in one of the tents. She presents her ID and is handed a plastic tube. Then she walks to a spot marked on the ground, collects a few globs of her saliva in the tube and places it into a bag labeled “Biohazard.”

“This seems to be a lot easier than sticking a cotton swab up your nose,” Muñoz says.

In just a few hours, she’ll get her results: negative. 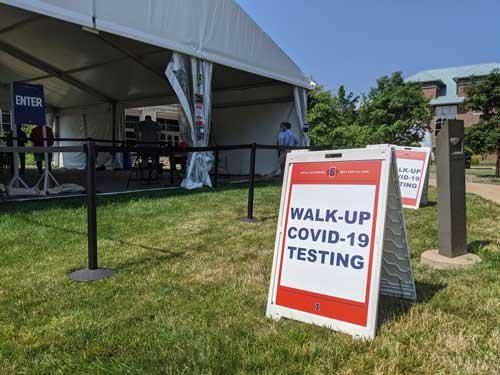 The school plans to offer free tests to the 50,000 students expected to return in August, and roughly 11,000 faculty and staff.

University of Illinois chemist Martin Burke is one of the researchers who developed the test being used on campus.

“The exciting thing is because we can test up to 10,000 per day, it allows the scientist to do what's really the best for trying to protect the community as opposed to having to cut corners, because of the limitations of the testing,” he says.

Research is still preliminary, but the campus’ own studies — and early results from other labs — show saliva-based tests are as accurate, if not more so, than  nasal swab tests.

As of this week, about half of U.S. colleges and universities plan to hold all fall classes in-person, according to The Chronicle of Higher Education. About a third, including the University of Illinois, plan a hybrid of in-person and online courses.

While some campuses have announced testing programs similar to the one in Illinois, many are limiting tests to those with symptoms or known exposure to someone with COVID-19.

University of Illinois epidemiologist Becky Smith says data suggest campuses need to test everyone every few days, because when a person gets infected, a detectable amount of virus doesn’t show up for three or four days.

“But about two days after that, your infectiousness peaks,” she says. “So we have a very small window of time in which to catch people before they have done most of the infection that they're going to be doing.”

Smith is co-leading university efforts to create the COVID-19 surveillance program. She has been tasked with figuring out who should be tested — and how often — to prevent the virus’ spread.

She has recommended that all students, faculty and staff be required to get tested twice a week, at least to start the semester. As the year goes on, the school might transition to targeting individuals at higher risk.

Smith expects campus officials will go with her recommendations because “they really want to follow the science on this.” No official decision has been announced.

“This virus is subject to silent spreading and asymptomatic spreading, and it's very hard to play catch up with this virus,” says Paltiel, who studies public health policy. “And so thinking that you can keep your campus safe by simply waiting until students develop symptoms before acting, I think, is a very dangerous game.”

Simulation models conducted by Paltiel and his colleagues show that, of all the factors university administrators can control — including the sensitivity and specificity of COVID-19 tests — the frequency of testing is most important.

He’s “painfully aware” that testing everyone on campus, every few days, sets a very high bar — logistically, financially, behaviorally — that may be beyond what most schools can reach. But the consequences of reopening campuses without those measures are severe, he says.

“The people who are going to be hurt are probably not the students,” he says. “It's going to be the dining hall workers and the staff and the members of the surrounding community, and even within each of those subpopulations, the most vulnerable.”

Paltiel disagrees with CDC guidance for higher-education institutions, which suggests that there’s not enough data to know whether testing everyone is effective.

“You really have to ask yourself whether you have any business reopening if you're not going to commit to an aggressive program of high-frequency testing,” he says. That needs to be coupled with a campaign promoting social distancing, hand-washing and mask-wearing.

Yale’s website, updated July 20, states all undergraduates, as well as grad students living in dormitory-style housing, will be tested upon arrival to campus and required to undergo weekly testing throughout the semester. 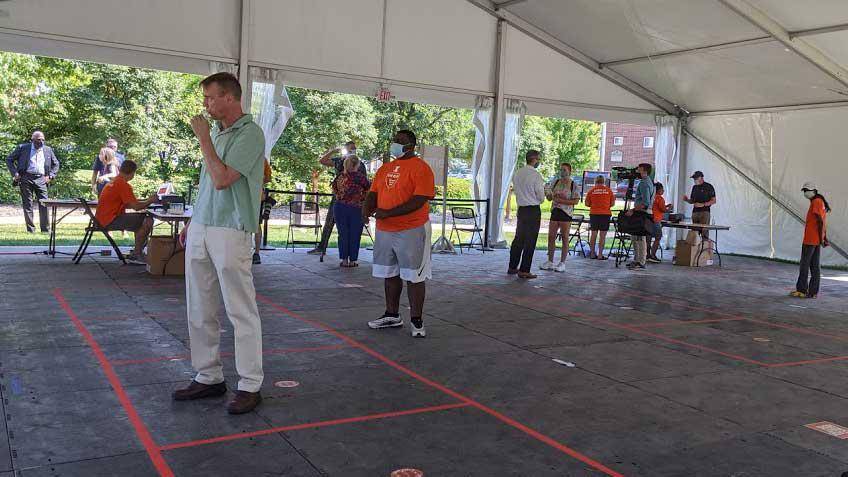 Since the COVID-19 test developed by the University of Illinois is not invasive, Burke says it’s more convenient, less risky and spares the campus from having to use up extraordinary amounts of personal protective equipment. Its design allows the campus to avoid other supply chain bottlenecks as well.

The test, as reported in a research manuscript that has yet to be peer-reviewed, is similar to traditional approaches, in that it identifies genes specific to the novel coronavirus. By using saliva, the test avoids the need for nasal swabs. And while other saliva-based tests require the virus’ genetic material to be isolated before the analysis, the university’s method bypasses that step.

Additionally, the on-site analysis avoids the backlogs at many public health and commercial labs. So results can be delivered faster, says Burke.

The manuscript states the cost of materials per test is about $10. Illinois’ testing program requires hiring 100 workers for the 16 to 20 test sites set up across campus.

The research team is still figuring out “the best deal for reagents,” Burke says, and as a result, he doesn’t know how much the testing program will cost. But he says the cost per test is “substantially less” than traditional approaches.

Smith says early university support — in the form of time, money and resources — was critical for the testing program. Researchers hustled to develop the test and figure out the logistics of mass COVID-19 testing.

“I like to say that there are moving parts within our moving parts in this system,” Smith says. “But everything that we are doing, we are documenting. And we are making it open source and we are sharing with any university who contacts us.”

Smith says she’s been contacted by people on other campuses interested in developing a similar program.

While the Urbana campus lab has been certified by the state’s public health department to use the tests, researchers are still seeking FDA clearance, which would allow other labs to adopt it.

The campus also is working with the local health department to conduct contact tracing and quarantine anyone who may have been exposed, says Champaign-Urbana Public Health administrator Julie Pryde.

Up to 5% of campus housing units will be set aside for students living on campus who need to isolate or quarantine.

Campus officials say they’ll have their own contact tracers on staff. Students and staff can use an app to see test results and get reminders about their next test.

With the COVID-19 testing program in place, Muñoz says it’s a great time to be a student on campus.

“The university does a really good job with making testing simple and easily accessible,” she says. “You can test and retest whenever you like, and most importantly, it’s free.”

Lately, hundreds of staff and students have been moving through the COVID-19 testing tents each day. And Smith says they’ll be ready when tens of thousands more arrive in August.

Tags:coronavirusCOVID-19Higher EducationSchool ReopeningCOVID-19 testing
At WFYI, our goal is to cover stories that matter to you. Our reporting is rooted in facts. It considers all perspectives and is available to everyone. We don't have paywalls, but we do need support. So if unbiased, trusted journalism is important to you, please join us. Donate now. 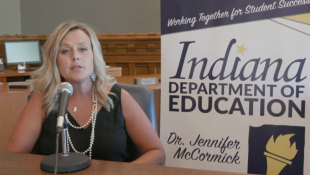 Indiana is investing millions of dollars in contact tracing, and health experts say it can help isolate and reduce the spread of the coronavirus. But schools are reporting challenges with that process.
Read More

Many school districts around the state have already reopened to in-person instruction, with several announcing positive COVID-19 cases.
Read More 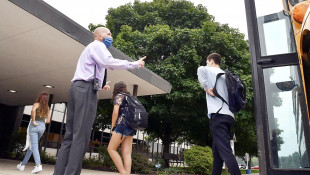