Summers in Indiana are going to get hotter. And those high heat days are especially dangerous for farm workers and other people who work outside. But right now, there are few laws to protect Indiana farm workers from extreme heat.

In August, more than a hundred farm workers filed into the basement of a former church in Odon at the end of a long day of picking watermelons. It’s still about 90 degrees outside and feels even hotter. Even in this small room, a fan is struggling to keep everyone cool.

Once the workers get settled, Miriam Sonderborg of the nonprofit Proteus starts a training on heat and pesticides in Spanish. She asks for a volunteer to lay down on the floor like someone who's just passed out from the heat. She asks another worker what they would do.

He starts to fan his friend. Sonderborg suggests bringing him water and once he can sit up — asking him some questions to make sure he’s OK. 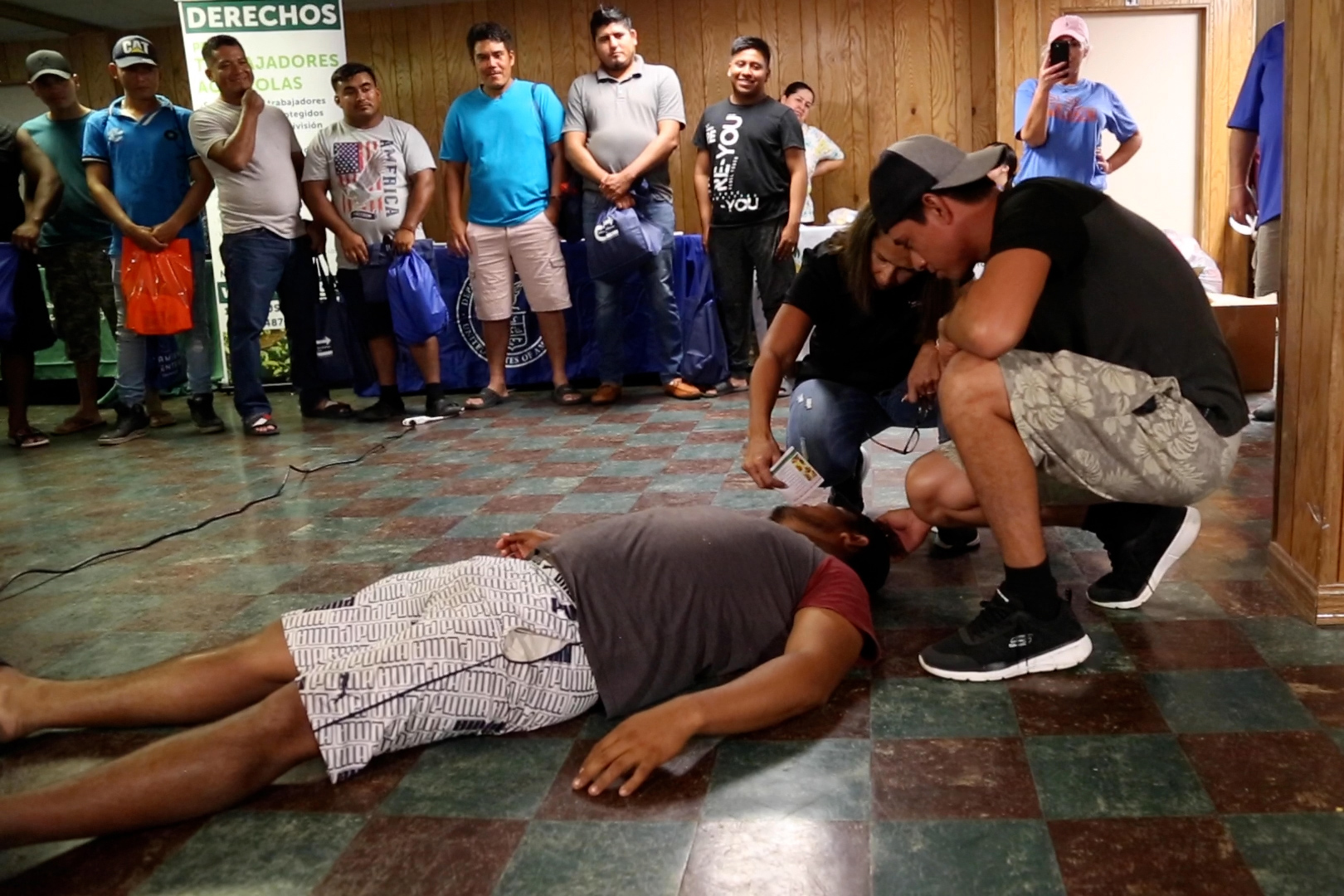 Sonderborg tells workers they need to drink water, take breaks, wear loose-fitting clothing, and watch out for each other.

Sounds easy, right? But some farm workers feel like they can’t do these things, said Leonel Lopez. Lopez is president of the Indiana Migrant and Seasonal Farmworker Coalition.

“They believe that drinking more water will make them go to the bathroom more often. And taking more breaks means less hours worked, meaning less hours paid," he said. "Or even getting in the mindset of the employer, ‘Oh, these people are going to take breaks too long. So I'm not gonna employ them again next year.'"

Farm workers are more likely to die in extreme heat

Not taking a break could mean risking your life. There are few laws to protect farm workers in extreme heat and though Proteus’ heat training is free, it isn’t mandatory.

Agricultural workers are 35 times more likely to die from heat than workers in other industries. In July of 2020, a young man named Jorge collapsed in the heat while detasseling corn. He came to northwest Indiana to work alongside his dad. It was only his second day on the job.

“From what I understood they didn’t have a plan in place meaning that three come in, three come out. You know, five go in, five come out. And he started getting sick. And he did tell someone that he wasn't feeling good," said Jesusa Rivera, a senior career coach with Proteus.

Later on, Jorge was nowhere to be found. They sent out a search party, but in the end they were too late.

Rivera was a farm worker herself, working in the fields since she was only 8 years old.

She said it can be hard for corn detasselers to even breathe in extreme heat — especially with all the clothing they wear to protect themselves from the sun, pesticides, bugs, and corn stalks that can cut their arms and faces.

"If you get pressured by your employer to meet a deadline, are you not going to work harder and faster, and kind of not take breaks to kind of get the work done?" she said. 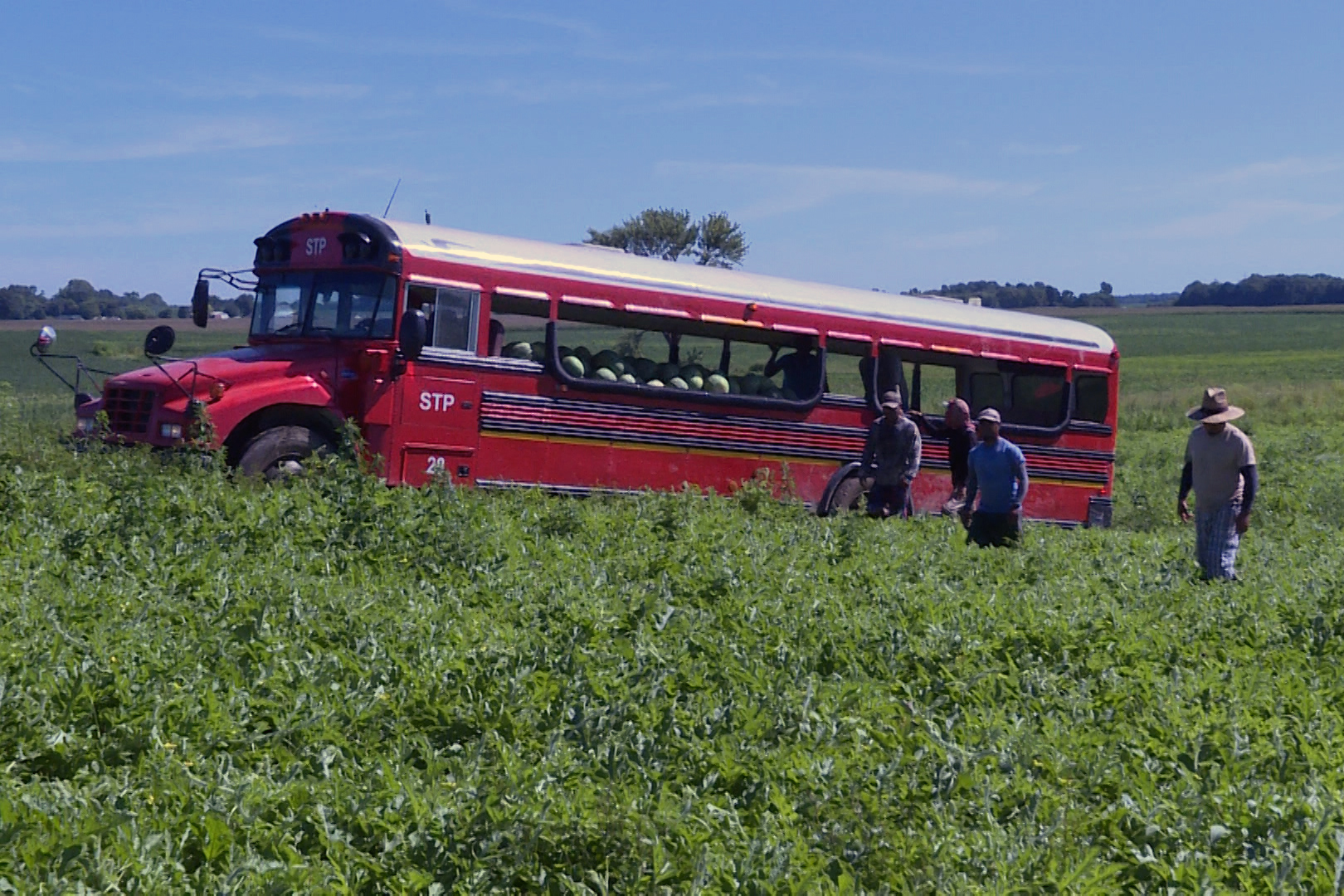 Roxana Chicas researches how heat affects farm workers at Emory University in Florida. In one study, her team found about half of Florida farm workers they studied had body temperatures at or above 100 degrees — essentially, a fever.

“And oftentimes, the symptoms that they report are, you know, muscle pain, nausea — very much the same symptoms that we have when we have a fever," Chicas said.

Chicas said some workers are dehydrated so often it does short-term damage to their kidneys.

She said it’s also likely that the number of hospitalizations and deaths is also being underestimated. Chicas said undocumented workers may not want to complain for fear of being deported.

Indiana also doesn't require farms to report work-related injuries and deaths to one, central organization — which can make it hard to get good data.

Right now, California, Washington and Oregon are the only states that have laws that specifically protect outdoor workers from extreme heat. Colorado has protections that target farm workers, but not other outdoor employees.

Several other states have tried to pass such laws and failed — including North Carolina, Maine, Virginia, and New York.

Maryland passed a heat protections bill for outdoor workers in 2020, but it has not been implemented.

Chicas said people in the agricultural industry sometimes argue these changes would be too difficult to implement and that they already have ways of keeping their workers safe.

“But if they were already put in place by either the growers and the people or the businesses that they represent, then we wouldn't have the statistics that say that people are dying from heat at such alarming rates," she said.

Indiana’s Occupational Safety and Health Administration can’t have rules stricter than federal ones — and the federal government only has guidelines right now.

The Indiana Department of Labor does try to educate employers on how to prevent heat-related illnesses through things like IOSHA inspections, the state's INSafe program, and other state communications.

Among other things, Chicas said workers should be trained on how to give first aid to someone suffering from heatstroke. Employers should also watch over workers when working in extreme heat to look for signs of heat-related illness.

OSHA is working on federal heat standards, but Chicas said there’s no telling when or if those will come out. In the meantime, she said farm workers continue to die in the heat.

The United States needs farm workers. Without them, we wouldn’t eat.

Jose Gomez is a harvesting contractor based in Florida who attended the Proteus training in Odon alongside his employees. He arranges work and housing for them as they make their way north picking watermelons from state to state.

Gomez said Indiana is usually their last stop before many of the workers return home to Mexico.

"It's a very hot job that nobody else wants to do," he said. "Unfortunately, we have to rely on these foreign workers to pick our fruits and vegetables. Yes, it's horrible out there, but it's bearable — with the right management, we can do it."

We spoke with a farm worker from Guanajuato, Mexico who asked that we not give his name. He’s been coming to Indiana on a visa to pick broccoli and corn.

He said it’s not easy working in this heat. And if we value the work that farm workers do, we need to start valuing workers’ lives.

You can find resources for farm workers and their employers through Proteus as well as Indiana Legal Services and its Workers Rights Protection Project (WRAPP). Workers can also file complaints with Indiana’s OSHA here.

Copyright 2022 IPB News. To see more, visit IPB News.
Tags:IPBAgriculturefarm workersworkplace safetyextreme heatclimate change
Support independent journalism today. You rely on WFYI to stay informed, and we depend on you to make our work possible. Donate to power our nonprofit reporting today. Give now.