Construction began today on ramps that will elevate Keystone Avenue over 96th Street as part of the 96th Street Corridor Improvement Project in Carmel.

Traffic on Keystone will be limited to two lanes in either direction, northbound and southbound, as a result of the project. To avoid the construction entirely, drivers can take U.S. 31 as a detour. On 96th Street, traffic will be moved to the south lanes, with one lane open in each direction from Keystone to just east of Priority Way.

According to the city, the project will be completed in 2019 after preliminary work this year.

Tags:Carmel96th StreetKeystone Avenue96th Street Corridor Improvement Project
Support independent journalism today. You rely on WFYI to stay informed, and we depend on you to make our work possible. Donate to power our nonprofit reporting today. Give now. 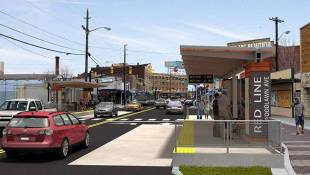 When complete, the rapid bus line will run about 13 miles from Broad Ripple on Indianapolis' north side to the University of Indianapolis on the south side.