Would Indiana Hospitals Be Ready For A Las Vegas-style Mass Shooting?

Indiana has at least a dozen trauma hospitals which could respond in the event of a mass shooting like the one in Las Vegas Sunday night. But those campuses have varying capabilities.

Only three hospitals, all in Indianapolis, are rated as “trauma one”– the highest rating, with doctors specializing in certain types of surgery that may be required after a severe wound.

Indiana Hospital Association Vice President Spencer Grover says all the state’s trauma centers are in big cities, because that’s where they tend to be needed most often.

“Where you have, usually, bigger populations, higher industry, higher trauma incidence because of transportation or just higher population density, you usually have more need for trauma-like services,” he says.

But neither a wide swath of southern and southeastern Indiana, nor the more urbanized northwest part of the state has any trauma facilities. As a result, Grover says, areas like Indianapolis are better-served following events such as the 2011 collapse of a stage at the Indiana State Fair, which killed seven people and injured 58 others.

But IU Health Methodist Hospital trauma program manager Jill Castor says even the four trauma hospitals in Indianapolis would be taxed by an event with the scope of the Las Vegas shootings.

“Those systems are in place to where they know where to send patients to not overwhelm them," Castor says. "Now in a situation like what happened at Las Vegas, everyone’s going to be overwhelmed regardless.”

At least 58 people were killed by gunman who fired upon thousands of people attending a music festival Sunday night on the Las Vegas Strip. More than 500 people were injured during the shooting and the panic that ensued as concert goers tried to escape the gunfire.

Tags:mass shootinghospitalstrauma hospitals
Support independent journalism today. You rely on WFYI to stay informed, and we depend on you to make our work possible. Donate to power our nonprofit reporting today. Give now. 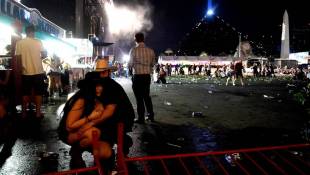 A stream of gunfire rained down on a country music concert attended by thousands of people Sunday night. More than 500 people were injured.