WFYI joins Move to Include initiative

INDIANAPOLIS – July 2020 marks the 30th anniversary of President Bush signing into law the Americans with Disabilities Act. In celebration of this civil rights law, WXXI Public Media (Rochester, New York) is expanding its innovativeMove to Include initiative into five additional communities, including central Indiana through WFYI. Funded through a grant from the Corporation of Public Broadcasting, this national effort will use the power of public media to inform and transform attitudes and behavior about disabilities.

“From our free IRIS – Indiana Reading and Information Services – program to the characters on PBS KIDS programming, WFYI has long been committed to inspiring our community to embrace those with different abilities,” said WFYI President and CEO Greg Petrowich. “Move to Include gives us the chance to listen and learn, and then bring even greater depth and focus to that work.”

Through Move to Include, WFYI will work to organize community partnerships, create content and provide outreach specific to their own communities. They will also contribute content to the PBS LearningMedia collection used by teachers, families and students, free of charge.  To learn more about this initiative, the work of all six stations, and more, visit movetoinclude.us/.

Below are a few highlights of what WFYI will be doing in central Indiana:

This half-hour documentary from 12 Star Media follows high school students from the Indiana School for the Blind and Vision Impaired as they work with an Indianapolis arts organization to design more accessible experiences. The piece will air with audio descriptions.

The story of DJ Savarese ("Deej"), a gifted, young writer and advocate for nonspeaking autistics.

An after-school dance program for kids with physical disabilities prepares for a spring recital.

Move to Include was launched in Rochester, New York in 2014 as a local partnership between WXXI and the Golisano Foundation, the nation’s largest private foundation devoted to supporting programs for people with intellectual disabilities. The Foundation, which also donated $20 million to build Southwest Florida’s Golisano Children’s Hospital, has provided more than $1 million in funding to date for Move to Include in Rochester. The Corporation for Public Broadcasting (CPB) awarded the initiative a $645,000 grant to help expand the multimedia initiative to these five public media organizations over 16 months.

“Public media’s mission is to make high quality programming free and accessible to all, and Move to Include is an important part of ensuring inclusion for people with disabilities,” said Pat Harrison, president and CEO of the Corporation for Public Broadcasting. “CPB is proud to support this effort by local public media stations to strengthen our civil society by building more inclusive communities.”

About WFYI Public Media
Since 1970, WFYI has served central Indiana as a trusted friend. Its public radio and TV stations and its community engagement activities inform, entertain and educate Hoosiers of all ages and walks of life. WFYI broadcasts original content as well as programming from PBS and NPR. WFYI is always here for you. Learn more at wfyi.org.

About the Corporation for Public Broadcasting
The Corporation for Public Broadcasting, a private, nonprofit corporation created by Congress in 1967, is the steward of the federal government’s investment in public broadcasting. It helps support the operations of more than 1,500 locally owned and operated public television and radio stations nationwide. CPB is also the largest single source of funding for research, technology, and program development for public radio, television, and related online services. For more information, visitwww.cpb.organd follow us on Twitter@CPBmedia,Facebook,LinkedIn, andsubscribefor other updates. 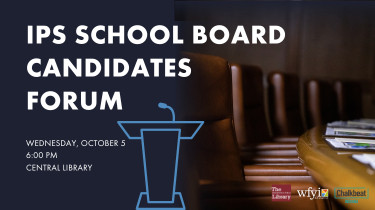 Candidates for the Indianapolis Public Schools (IPS) school board will participate in the 2022 Schoo...