INDIANAPOLIS — Indiana’s chief PBS and NPR member station, WFYI, will welcome Katrina Pross to its newsroom as a criminal justice enterprise reporter, thanks to the station’s partnership with Report for America and local support from Cummins, Inc. (NYSE: CMI).

Katrina Pross previously reported on the courts and criminal justice for the St. Paul Pioneer Press in Minnesota and will join the newsroom full-time in June. She recently covered the trial of Derek Chauvin for the death of George Floyd. Pross majored in both journalism and French at the University of Minnesota, where she was a reporter and editor at the school’s paper. She also interned at APM Reports, the Star Tribune and a radio station in France.

WFYI’s newsroom has recently added education reporters, a business reporter and a digital editor. With a focus on equity, the public media station’s team reports daily on education, local and state politics, health and a range of local topics, alongside stories from a statewide reporting collaborative with Indiana Public Broadcasting Stations.

“Many criminal justice reforms have been promised, and some have already begun in Indianapolis. Journalism needs to bear witness to what happens next and amplify the impact to the public,” said Sarah Neal-Estes. “Katrina’s experience and skills will allow us to tell that story, both over the radio and in our digital outlets."

Report for America announced Pross’s placement along with 299 other 2021 corps members assigned to more than 200 local newsrooms spread across the U.S.

“The crisis in our democracy, disinformation and polarization, is in many ways a result of the collapse of local news,” said Steven Waldman, co-founder and president of Report for America. “We have a unique opportunity to reverse this decline by filling newsrooms with talented journalists who not only view journalism as a public service, but who can make trusted connections with the communities they serve.”

Report for America launched in 2017 with the objective of placing 1,000 journalists in newsrooms across the U.S. by 2024 to combat a decades-long contraction in the number of reporters on the ground in communities. Between 2008 and 2019, more than 36,000 jobs were cut from newspaper newsrooms nationwide, and hundreds of newspapers have closed their doors.

RFA leaders aim to place journalists in partner newsrooms where they can focus on under-covered topics and communities.

WFYI is one of two newsrooms in Indianapolis selected for Report for America partnerships. The public media station has increasingly been called upon to fill voids in nearby communities as other news organizations contract. In her new role, Pross will focus on criminal justice in Central Indiana. This is primarily an enterprise beat that is being launched at a time when Indianapolis is considering a variety of police reforms and opening a new criminal justice campus that includes mental health and drug treatment facilities as well as courts and jail facilities.

Since 1970, WFYI has served central Indiana as a trusted friend. Its public radio and TV stations and its community engagement activities inform, entertain and educate Hoosiers of all ages and walks of life. WFYI broad casts original content as well as programming from PBS and NPR. WFYI is always here for you. Learn more at wfyi.org. 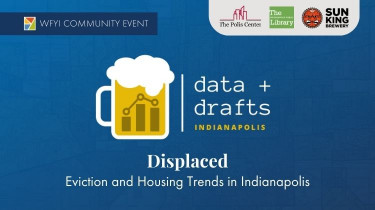 Data and Drafts: Eviction and Housing Trends in Indianapolis

What are the current eviction trends in Indianapolis and what do they mean? Hear from Polis Center a...