Fifty year-old Kevin Polly is a recovering drug addict. He started using at age 13. His story of repeated attempts at rehabilitation as reported by Side Effects, WFYI’s public health reporting initiative, put a face on the devastating results of addiction and a historic HIV outbreak in Austin, Ind.

Thanks to a $600,000 grant from the Richard M. Fairbanks Foundation, more stories like Kevin’s can be told through a new Indiana-focused health news bureau and community engagement effort at WFYI. This bureau will produce in-depth reports that will be made available to other news outlets for republication or broadcast further enhancing Side Effects’ impact, which already reaches tens of thousands of listeners and readers in the Midwest and millions more nationally through National Public Radio.

“Opioid addiction, obesity and rising health care costs are just a few of the topics that concern Hoosiers, but they receive limited regular, in-depth reporting in local media,” WFYI Public Media president and CEO Lloyd Wright said. “With this generous support from the Fairbanks Foundation, we can now establish a local health news bureau and ultimately reach a larger audience to educate even more people on these important issues.”

With the Fairbanks Foundation grant, WFYI will add four new team members to its news and engagement teams.

“Supporting the health news bureau aligns well with our mission, which is to advance the vitality of Indianapolis and the well-being of its people,” Richard M. Fairbanks Foundation President and CEO Claire J. Fiddian-Green said. “WFYI plays a key role in keeping people around Central Indiana informed, and we look forward to supporting this new local health reporting initiative to increase awareness of the important public health issues facing our communities.”

In addition to the Fairbanks grant, WFYI has also received a $100,000 grant from The Glick Fund, a fund of the Central Indiana Community Foundation, to establish a new reporting beat focusing on poverty, wealth and equity. The new initiative will allow WFYI to deepen its coverage focusing on economic issues and the personal financial challenges of many Hoosiers.

“Too many people are struggling to make ends meet financially, and some are simply missing out on information to help them make sound personal financial decisions,” Glick Fund advisor Marianne Glick said. “More of these stories need to be told so lawmakers and people of influence are regularly reminded of these challenges and the need to find better solutions.” Both grants are two-year commitments that begin in 2017.

“Thanks to partners like the Glick Foundation and the Fairbanks Foundation, we are better able to serve the community with high-quality local news coverage that helps people better understand complicated issues,” Wright said. “Our commitment to unbiased reporting and engaging storytelling at WFYI has never been stronger, and this kind of support is crucial to allowing us to continue to raise the bar.”

About The Glick Fund
The Glick Fund is a donor-advised fund of the Central Indiana Community Foundation. It was established by Eugene and Marilyn Glick in 1998 to support a variety of causes. Grants are awarded by invitation only, with no unsolicited grant applications accepted. The Glick Fund also strives to align with CICF’s three broader community leadership initiatives of: Family Success & Making Connections; Inspiring Places; and College Readiness & Success – initiatives aimed at making central Indiana one of the best places in the nation to live, work and raise a family.
To date, The Glick Fund has awarded over $55 million in grants to not-for-profit organizations. Recent grant recipients include the Indianapolis Cultural Trail, the Glick Center for Glass at Ball State University, Heartland Truly Moving Pictures, the Eugene and Marilyn Glick Indiana Authors Award, Providence Cristo Rey High School and United Way of Central Indiana, among many other organizations. For more information, please visit cicf.org. 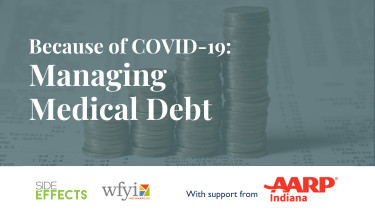 Because of COVID-19: Managing Medical Debt

Medical debt was a problem well before COVID sent thousands of people to hospitals. What can you do ...