The America Amplified 2.0 initiative, based at WFYI Public Media in Indianapolis, announced today that 20 public media stations will be part of its 2021 and 2022 community engagement journalism cohorts. Each of the stations will receive funding and support from the initiative, which is supported by a grant from the Corporation for Public Broadcasting.

The America Amplified initiative aims to expand the use of journalism practices that meaningfully address local information needs through active listening and engagement, especially in communities that have been traditionally underserved by public media.

Most of the stations selected have small to medium-sized newsrooms, ranging from newsroom staffs of only 2 people to ones with up to 19 employees. They span the country from New England to Appalachia, from Alaska to Texas, and from New Orleans to Oklahoma City. Some stations actively use community engagement practices while others are just beginning.

“Our plan is to group stations into peer-learning cohorts based on their goals for engagement,” explained America Amplified Managing Director Alisa Barba. “By grouping stations that are just beginning to engage their communities with some stations that have already been doing it for a while, we trust that best practices will be shared and all of the stations will deepen engagement as a result.”

All of the stations selected to be part of this initiative share the broad goal of wanting to deepen trust from their communities in the journalism they produce. Yet, because they serve widely divergent audiences, each stations’ individual goals and strategies may differ.

North State Public Radio in Chico, California, for instance, wants to learn how best to focus their resources to “serve the public when reporting on devastating wildfires.” Montana Public Radio (MTPR) in Missoula sees their goal to “reflect the full voices of the public,” and is seeking strategies to increase news tips and program ideas from community members who trust MTPR to cover the issues important to them.  WNIN in Evansville, Indiana, wants to provide “culturally competent content about and for Latinos in the Midwest.”

The America Amplified initiative is funded through a $983,451 grant from the Corporation for Public Broadcasting.

Under the 18-month grant, a four-person team hosted by WFYI will work with participating public media stations to develop and implement community engagement journalism strategies.

The initiative builds on the success of America Amplified, a CPB-supported partnership of public media collaborations, hosted by KCUR in Kansas City. The earlier initiative focused on community listening and engagement in 2020 to strengthen public media’s ability to incorporate community and citizen perspectives into election coverage. The collaboration also helped shape public media coverage of the coronavirus pandemic. That coverage included perspectives from diverse communities, including weekly call-in radio shows co-hosted by public radio stations in different parts of the country.  The initiative also produced a Community Engagement Playbook designed to inform the public media system widely on strategies and tools for deepening relationships with American communities.

For more information about America Amplified, including the Community Engagement Playbook and highlights from the original cohort, go to americaamplified.org.

About WFYI Public Media
Since 1970, WFYI has served Central Indiana as a trusted friend. Its nonprofit public radio and TV stations, digital engagement, and community engagement activities inform, entertain and educate Hoosiers of all ages and walks of life. WFYI broadcasts original content as well as programming from PBS and NPR. Learn more at wfyi.org and follow us on Twitter @wfyi, Facebook, Instagram and LinkedIn.

About CPB
The Corporation for Public Broadcasting (CPB), a private, nonprofit corporation created by Congress in 1967, is the steward of the federal government’s investment in public broadcasting. It helps support the operations of more than 1,500 locally managed and operated public television and radio stations nationwide. CPB is also the largest single source of funding for research, technology, and program development for public radio, television, and related online services. For more information, visit cpb.org, follow us on Twitter @CPBmedia, Facebook and LinkedIn and subscribe for other updates. 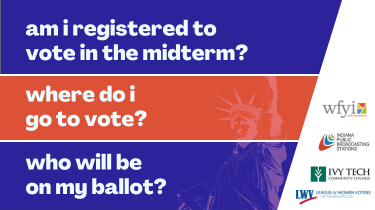 Voting 101: Everything you need to be ready for the midterm election