INDIANAPOLIS (AP) — The Indiana State Department of Health on Wednesday again increased the number of counties designated as higher-risk locations for coronavirus spread.

Fifty-three of Indiana’s 92 counties were placed in orange or red levels under the agency’s color-coded weekly tracking map update, while 40 counties were at those levels last week.

While two fewer counties are listed under the most severe level compared to last week, more than half of the counties across the state are designated as higher-risk — the most since the state implemented the rating system in September.

Republican Gov. Eric Holcomb, who was scheduled to take part in a Wednesday afternoon briefing on the pandemic, decided a month ago to lift nearly all of Indiana’s restrictions while extending the mask mandate. Holcomb announced earlier this month another month-long renewal of the mask order until at least Nov. 14, but tougher restrictions on businesses and crowd sizes were not reinstated despite continued increases in COVID-19 hospitalizations and rates of new infections.

Holcomb has defended his actions, urging residents to continue taking precautions and saying that the COVID-19 spread is being monitored daily.

The highest-risk counties are now in the eastern region of the state, including hotspots in Fayette, Dearborn and Ohio counties.

Indiana’s remaining 39 counties received yellow or blue ratings based on the number of new cases per 100,000 residents and the percentage of tests confirming COVID-19 infections.

The department’s daily update of its coronavirus dashboard also showed 1,679 Hoosiers are currently hospitalized with the coronavirus. Of those, 470 are in intensive care. Such hospitalizations have grown by more than 69% since Sept. 22 — the day before Holcomb announced the changes.

State officials added 14 more coronavirus deaths on Wednesday to raise the state’s death toll to 4,227, including confirmed and presumed coronavirus cases. That’s an increase of 204 deaths in the past week. 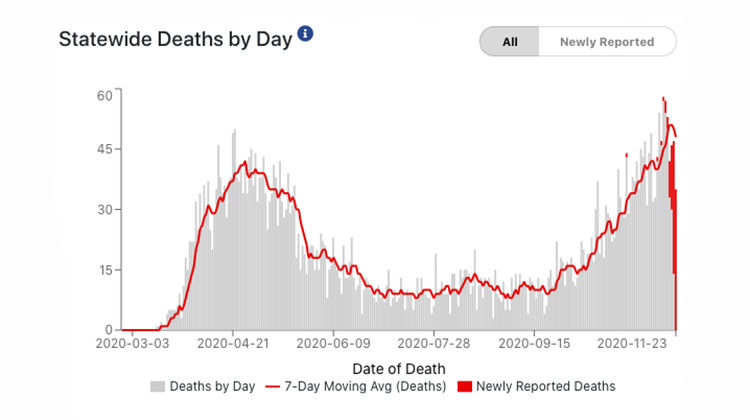 Coronavirus hospitalizations have reached a level where health care leaders say the system is becoming overwhelmed and some hospitals have started rationing care to treat those most severely ill.
Read More

Indiana has crossed 300,000 positive COVID-19 cases. Monday's newly reported cases were the fewest in nearly a week -- though the state has reported more than 5,000 cases every day since Nov. 10.
Read More