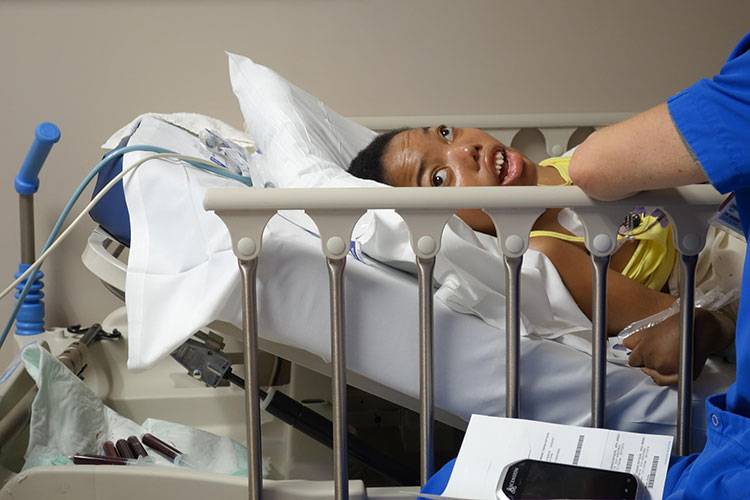 Tashea Jernigan gets blood transfusions every three weeks because she has sickle cell disease and it prevents her from having another stroke. (Emily Forman/Side Effects Public Media)

Tamitria Jernigan takes her daughter Tashea to the Peyton Manning Children’s Hospital at St. Vincent’s in Indianapolis every three weeks for a blood transfusion. Tashea has a blood disorder known as sickle cell disease and it caused her to have a stroke when she was two years old. The regular blood transfusions prevent her from having another one.

The trouble is when Tashea had the stroke, she was in Indiana’s Lake County, a place where few medical providers know how to handle sickle cell disease. A doctor from Indianapolis now visits the region a few times a year to fill the gaps but that care came too late for Jernigan and her daughter.

These days just leaving the house is a heroic feat because Tashea is wheelchair bound. Jernigan has to lift Tashea out of her bed into her wheelchair and from the wheelchair to the car. Tashea is only 42 pounds but it still takes a toll on Jernigan’s arthritic knees.

They moved to Indianapolis from Lake County eight months ago for Tashea’s health. Jernigan followed her oldest daughter who recently started college at Purdue University in Indianapolis. But the move meant leaving  behind two teenage daughters because of a custody battle. She still hopes to bring them to Indianapolis one day but she couldn’t risk Tashea’s health any longer. Tashea almost died twice because she wasn’t getting proper care in Lake County. 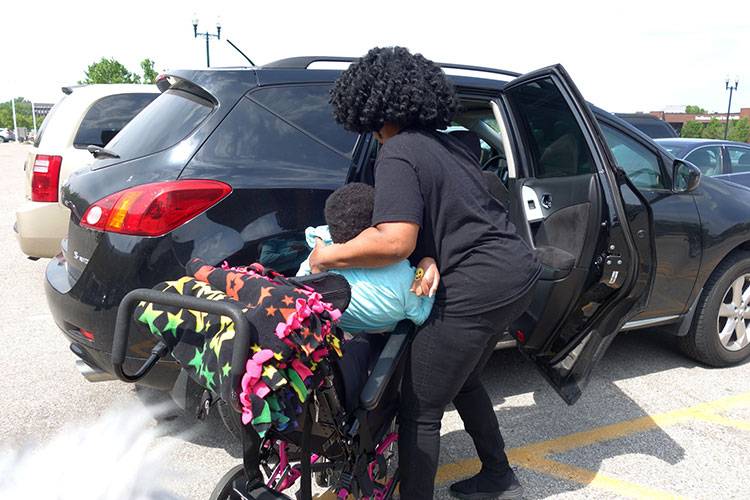 “And once we got here doctors appointments was just was falling in our lap,” said Jernigan. Although she was homesick, Jernigan said she was happy to be in Indianapolis, “because she (Tashea) was being neglected for so so so many years on her health.”

Jernigan said she gave up on Lake County hospitals after they didn’t have blood ready for one of Tashea’s scheduled transfusions. Jernigan said her daughter can’t afford to miss a transfusion and risk another stroke because she might not survive.

For years, Jernigan took Tashea to Illinois for sickle cell treatment. A lot of families in Lake County do this because the care is better. But Tashea needed more than sickle cell care. She needed specialists to help her breathe, to help her gain weight and to make sure her medications didn’t damage her organs.

Jernigan said there was a cap on how much of Tashea’s medical care her Indiana insurance would cover out-of-state. Finally her doctor in Illinois told her she needed to move - either to Illinois or Indianapolis.

Jernigan chose Indianapolis to be close to her oldest daughter. Jernigan said she has already seen results “she has not been hospitalized not once in eight months we’ve been here.” She said she posted the good news on her Facebook page, “because she was going to the hospital every month when we was up in Lake.” 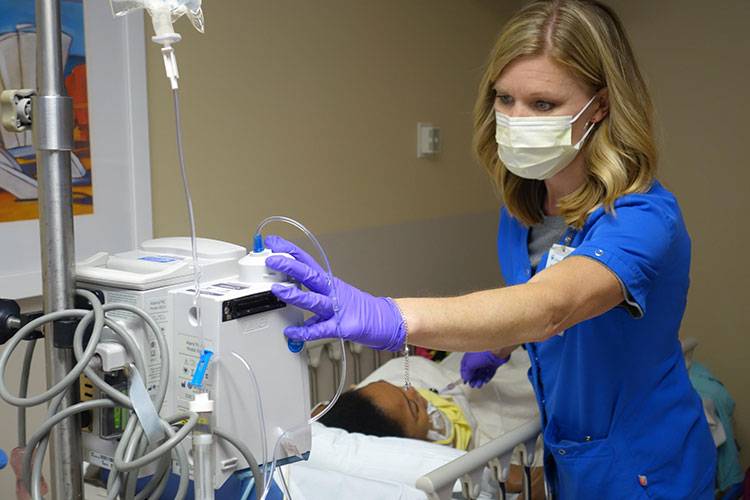 Jernigan cobbled together Tashea’s care for nearly 15 years. She said she had no idea there were specialists that could help her daughter two hours south in Indianapolis, and the Lake County doctors never mentioned it. The out-of-state doctors made the referral.

Tashea can’t talk. She can’t move. It’s because of the stroke she had when she was two years old. Jernigan remembers taking her daughter to the ER because she couldn’t breathe. She got worse and the doctors sent Tashea to an Illinois hospital.

The next day Jernigan learned Tashea had had a stroke. Jernigan said the doctors told her, “she had the mentality of a newborn,” and that she’d never be the same.

Doctor Emily Meier is Tashea’s hematologist in Indianapolis now. “It’s a sad case because we don’t see very many kids like that anymore.” She said Tashea’s case used to be the norm with children who have sickle cell disease. But treatment has improved over time. Now doctors start kids on a medication to prevent stroke earlier.

Jernigan knows things are different but she said she still beats herself up. “I tell the doctors I wish I had of came here before now,” she said, remembering her daredevil daughter at two, pre-stroke. She used to ride her toy bike down the stairs, gobble pancakes and listen to her favorite song Get Low by Lil Jon and The East Side Boyz. 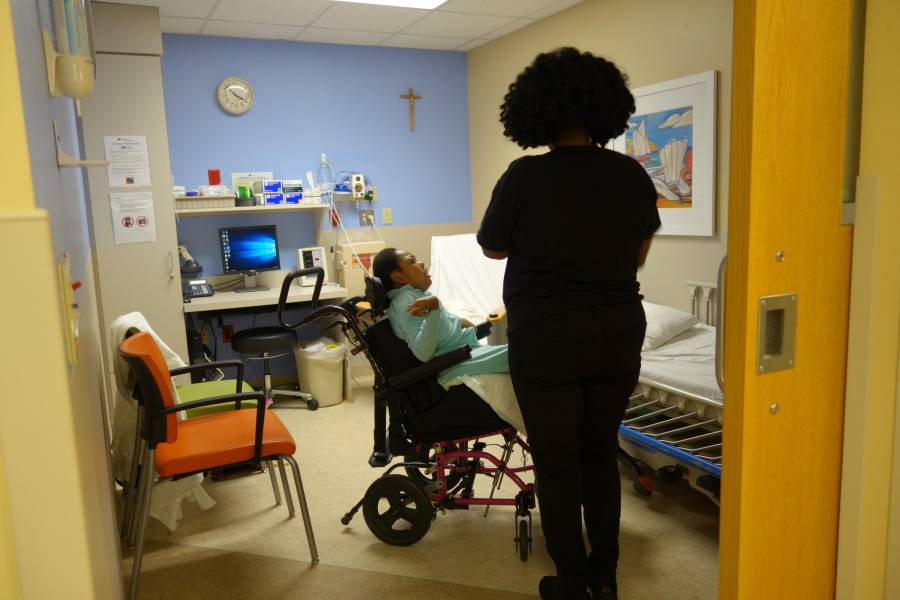 After the blood transfusion, Tamitria Jernigan and her daughter get ready to leave the hospital. (Emily Forman/Side Effects Public Media)

Meanwhile, Jernigan will soon find out if surgery can help straighten her daughter’s spine. After 15 years of dealing with Tashea’s health issues, Jernigan has discovered an entire world of new medical options for her daughter and a new life for herself. In fact Jernigan’s started to date after a nine year hiatus and she’s on the search for a Bruce Willis type. “That is my future husband,” she laughed.

Tags:sickle cell diseasehealthcare access
Support independent journalism today. You rely on WFYI to stay informed, and we depend on you to make our work possible. Donate to power our nonprofit reporting today. Give now. 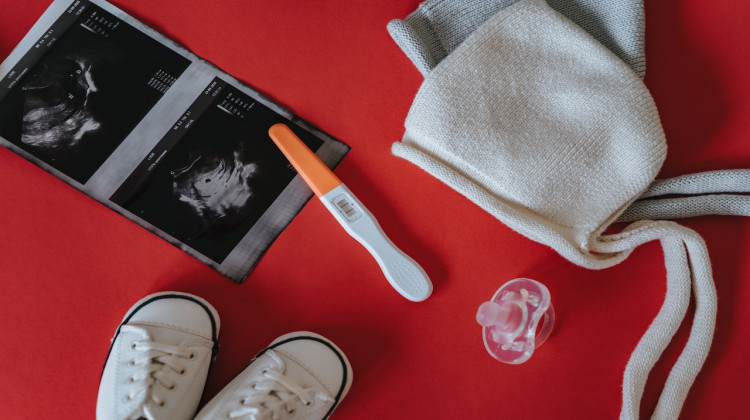 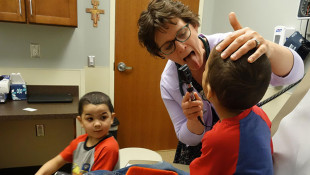 Indiana Hematologist Hits The Road To Prevent Children From Having Strokes

Doctor Emily Meier usually practices hematology at the Indiana Hemophilia and Thrombosis Center in Indianapolis. But four times a year Meier and her team drive two hours north to Lake County and host a clinic for children diagnosed with sickle cell disease.