Lawmakers easily passed a bill to ban transgender girls from girls school sports, despite protests during the legislative session. Gov. Eric Holcomb vetoed the bill, but a one-day technical session this Tuesday will be lawmakers’ first opportunity to overturn that veto.

But this bill is just part of a national push behind this bill and some experts say it has nothing to do with sports.

House Bill 1041 would have created a statewide ban on transgender girls participating in girls’ school sports. The bill’s author, Rep. Michelle Davis (R-Whiteland), said it was to maintain fairness in girls athletics.

Holcomb said he “found no evidence” to support that there is a problem in K-12 girls sports and vetoed the bill on March 21.

Veronica Pejril is Indiana’s first openly transgender elected official and serves on Greencastle’s city council. She said she agrees with the governor’s assessment.

“I was really pleased that Gov. Holcomb went and vetoed the law, because he recognized that this is a solution in search of a problem,” Pejril said.

Another protest here at the Statehouse against HB 1041 -- folks also talking about being opposed to HB 1134. pic.twitter.com/SDMbcImhYm

So where does this bill come from?

The bill passed by Indiana lawmakers shares nearly identical language to bills in Idaho and Montana. All three were supported by the Alliance Defending Freedom – a far-right Christian legal organization.

He said it’s not uncommon for special interest groups and organizations to create model language for bills and pass them along to friendly state and federal lawmakers.

More than 80 anti-trans bills were introduced in state legislatures in 2021 alone.

“What’s driving this – I think – is a concerted campaign on the part of a number of anti-LGBTQ groups, in response to a recent Supreme Court decision called Bostock v. Clayton County, Georgia,” McCoy said.

That 2020 decision expands federal civil rights protections “on the basis of sex” to gay and transgender employees.

Which is why McCoy said, the Alliance Defending Freedom and other anti-LGBTQ groups are pushing bills on everything from school sports to bans on gender-affirming health care for transgender youth.

The ADF testified in favor of Indiana’s ban in both chambers. The SPLC classified the organization as a hate group in 2016.

The SPLC publishes an annual census of hate groups. It gathers writings, position papers and historical positions from organizations, and then researchers use that to decide if an organization is a hate group, following a similar definition to what the FBI identifies as a hate crime.

“To be clear though, just simply being against gay marriage or something of that nature, isn’t enough for an organization to qualify as a hate group on our list. It takes more than that,” McCoy said.

In response to being named as a hate group, the Alliance Defending Freedom called the SPLC a far-left organization that targets groups it disagrees with.

The ADF has defended laws internationally to criminalize the LGBTQ community – including the forced sterilization of transgender Europeans. Greencastle City Councillor Veronica Pejril said their work in the U.S. goes back 20 years.

“Twenty years ago, the ADF was defending Texas’s unconstitutional sodomy laws. And they lost,” Pejril said. “Ten years ago, they defended denying marriage to all Americans, and they lost there too. And now they’re trying to deny transgender Americans access to life-saving care and opportunities in school. And they’re going to lose here too.”

In his veto letter, Holcomb said one of his reasons for vetoing the bill was how similar bills nationwide were halted by courts.

Katie Blair is the director of advocacy and public policy at the ACLU of Indiana.

“This law is blatantly discriminatory and it’s a Title IX violation. It also violates the equal protection clause of the 14th Amendment,” Blair said. “There’s a clear argument against it, and one that we would certainly make in the courts if this bill were to go into effect.”

Before the bill was sent to the governor’s desk, the ACLU of Indiana promised to sue. Blair said the intention of the bill was never about sports.

“If proponents of this bill really wanted to promote fairness in women’s sports, they’d be making it so that more money had to go to girls sports,” Blair said. “You know, contributing in that way – not doing it in a way that cuts out girls from playing sports.”

The day after the governor’s veto, House Speaker Todd Huston (R-Fishers) promised the House would vote to override it on Tuesday, May 24 – when lawmakers come back for a one-day technical corrections session. Senate leadership has not made a statement on the veto. But a veto can be overridden by a simple majority vote in both chambers.

Tags:transgender girls sportsstatehousevetooverturn
Support independent journalism today. You rely on WFYI to stay informed, and we depend on you to make our work possible. Donate to power our nonprofit reporting today. Give now. 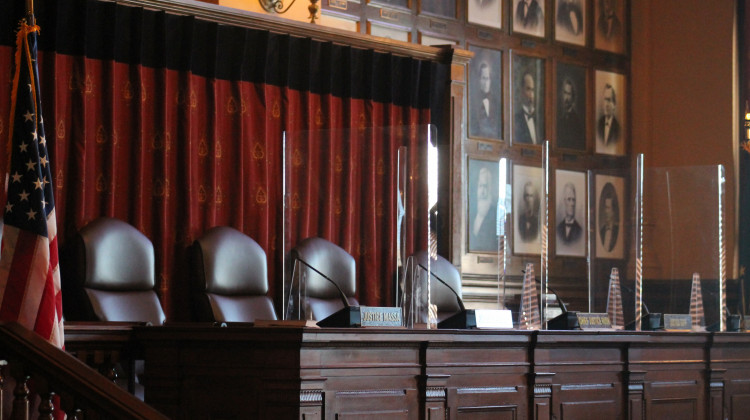 A gay teacher at a Catholic high school in Indianapolis sued the Archdiocese after he was fired. The Indiana Supreme Court must now decide whether his case against the Archdiocese will move forward.
Read More