Advocates For Undocumented Hoosiers Call On Lawmakers For Reform

Advocates for immigration reform rallied in South Bend Thursday night, calling on Indiana lawmakers to make changes that would help many undocumented Hoosiers.

Although the issues aren’t new, they are getting renewed support from Black Lives Matter groups and a recent win at the Supreme Court.

The Indiana Undocumented Youth Alliance is planning another demonstration on July 4 at the state's only immigration detention center in Clay County.

Tags:Immigrationimmigration reformSouth Bendundocumented immigrants
At WFYI, our goal is to cover stories that matter to you. Our reporting is rooted in facts. It considers all perspectives and is available to everyone. We don't have paywalls, but we do need support. So if unbiased, trusted journalism is important to you, please join us. Donate now.

A Black woman who says she has received numerous racist and threatening messages as an Indiana congressional candidate against Vice President Mike Pence's brother called police after hearing what she thought was gunfire before a campaign event.
Read More 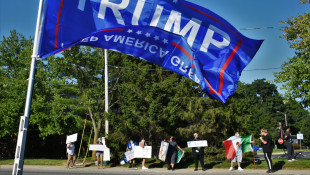 Goshen, Indiana, is a little blue dot in a mostly red, rural county. Its Main Street is a simple two-lane street, but gets a lot of traffic being one of the most direct ways in and out of town.
Read More