Monica Kelsey first encountered a baby box in a small church while on a trip to South Africa.

Called a “baby safe,” the wooden box had no bells or whistles, but an obvious purpose.

“I had never seen anything like this before,” Kelsey said. “And so on the flight back from Cape Town, South Africa, on a Delta napkin I hand drew my version of the baby box.”

The idea of a box where a baby may be safely and anonymously surrendered is centuries old. In Medieval times they were first recorded in Italy and called founding wheels. Kelsey’s modern baby boxes are built into the sides of fire stations or hospitals. The temperature-controlled boxes open from the outside and allow people to surrender infants anonymously. When the box detects a baby inside, an alarm notifies staff at the facility and a call is sent to 911 to notify first responders.

Kelsey opened the first baby box in the United States in 2016 in the small northeast Indiana town of Woodburn, where she is a firefighter.

In the years since, Kelsey’s nonprofit, Safe Haven Baby Boxes, has opened 88 baby boxes in Indiana. And it’s an idea that has spread across the country – there are 117 baby boxes nationwide in states like Ohio, Florida and New Mexico.

In early August, Indiana passed the nation’s first restrictive abortion legislation following the Supreme Court’s overturning of Roe v. Wade. As more states pass abortion bans, more women will find themselves with fewer choices in the event of an unwanted pregnancy. And anti-abortion rights advocates like Kelsey see baby boxes as one solution.

“I think we all can agree that a baby box that calls 911 on its own is a better option than a dumpster,” Kelsey said. “Getting people to wrap their heads around that fact has been a struggle.”

Not everyone was originally onboard

Kelsey first faced opposition from Indiana's Department of Child Services and Department of Health. In a joint statement the agencies said there was “no evidence to suggest the use of baby boxes is a safe, prudent way to surrender a child.” The agencies responded to a request for comment saying they have no current statement on the boxes.

Kelsey persisted and lobbied lawmakers who advocated for the expansion of baby boxes.

Indiana’s Safe Haven law allows anyone to safely surrender their baby within 30 days of birth without risking prosecution or arrest. Babies are immediately brought to the hospital and enter the state's foster program to be adopted. In 2018, the law was amended to include baby boxes.

Kelsey has a personal connection to this issue. Her birth mother, who was 17 when she was raped, she said, abandoned her at the hospital a few hours after she was born.

Kelsey was at the Indiana Statehouse recently as lawmakers drafted an abortion ban and abortion-rights supporters filled the halls. Indiana’s ban includes limited exceptions for rape, incest and in cases of lethal fetal anomalies or serious risks to the pregnant person’s health.

Kelsey is anti-abortion and said she was discouraged.

“I kept hearing that abortion should be allowed in the cases of rape and incest and it just made me feel sad. Because it was almost like they didn't, they didn't value my worth. You know, they don't know me,” Kelsey said.

Some legal scholars worry the boxes could be a distraction from other issues complicating legislation and resources for pregnant people, families and children.

“It's really simple from a policy manner. It doesn't require you to face hard questions about what we owe people most impacted by abortion bans,” Oberman said. “What are our moral obligations to those who might consider abortion because they can't afford to have a child?”

Oberman said the majority of women who receive abortions are below the poverty line and the baby box option is not targeted to the women who may kill their newborns or abandon a baby to die after concealing a pregnancy.

“It’s not the proactive profile of folks who are like, ‘Oh, got it. I know about the Safe Haven Law. I'm gonna hop on the bus and ride down to the box and pop my baby in,’” she said, “No, these are folks that are so passive that they don't make a birth plan.” 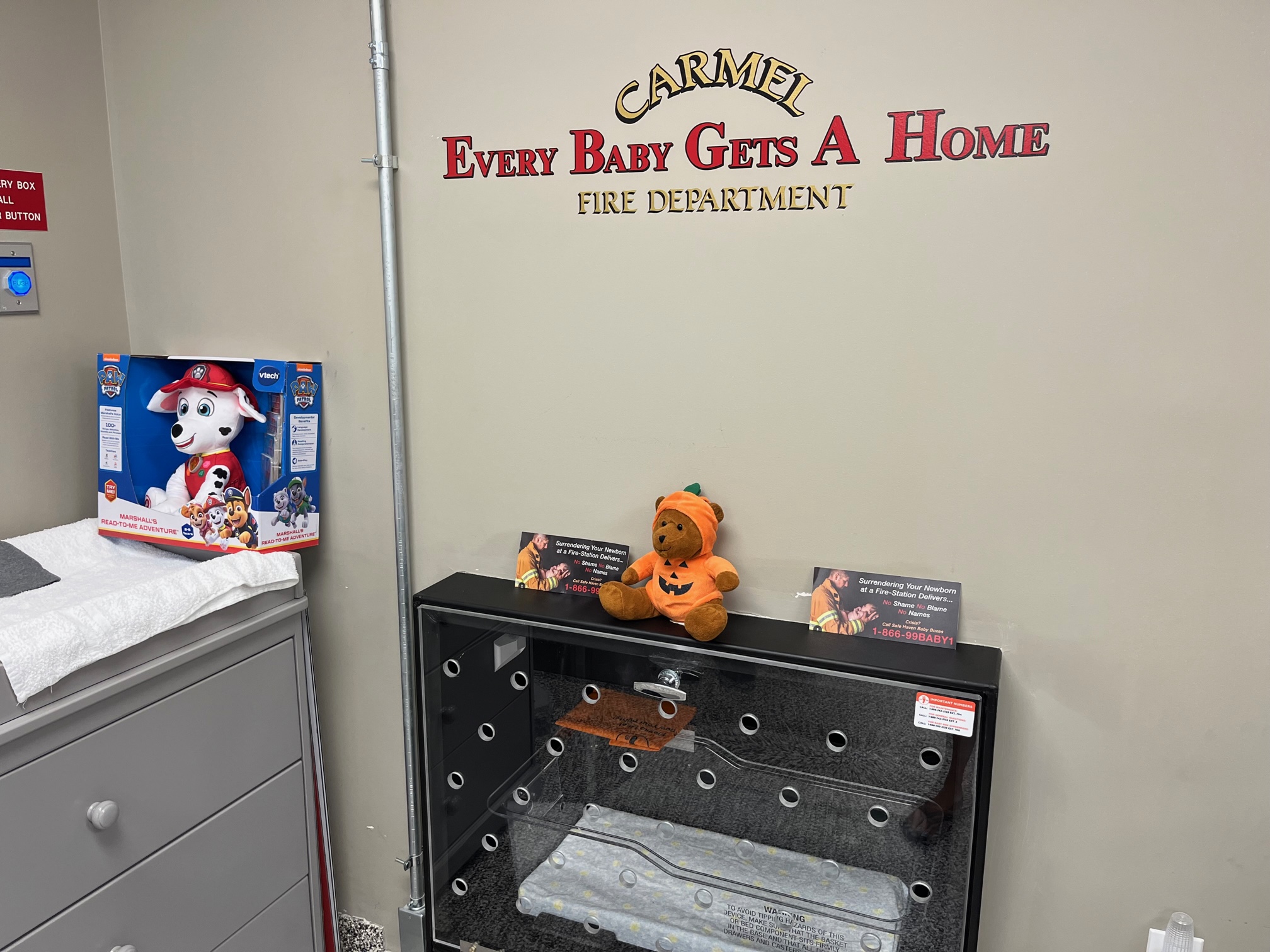 Indiana’s Safe Haven law has been on the books since 2000, but like many states, not much has been done to advertise it. But word is spreading about Kelsey’s Safe Haven Baby Boxes. Kelsey said there are plans for dozens more boxes by the end of the year.

Many of them are funded privately through church donations. When suburban Carmel, Indiana, opened its box in 2017, it was partially paid for by township trustee money – taxpayer dollars that fund social services.

Fire Chief David Haboush views the baby box as another door to the firehouse and a welcome alternative to dispatching first responders to search for and rescue missing or abandoned babies.

“We can fill in the blank on many horrific things that have happened prior to the Safe Haven program here in the state of Indiana,” Haboush said. This includes babies left abandoned in the woods or a public bathroom trash can.

Kelsey said she’s not aware of any abandoned babies that have been found dead in Indiana since the program started. The baby boxes have accepted 21 infant surrenders. The Carmel station alone has had three in the past four months.

On a bright summer morning at the fire station in the small town of Elwood, Indiana, the 86th box was opened.

“This is just another tool in our box,” Sullivan said.

“It will be exciting to see if the families allow us to see what these lives do over the next 80 years," he said. “To see what place in history these people, who are entrusted to the firefighters, to see where they end up.”

This story comes from WFYI, in collaboration with Side Effects Public Media. Follow Jill on Twitter: @JillASheridan.

Tags:Side Effects Public Mediainfantsbaby boxesabortion laws
Support independent journalism today. You rely on WFYI to stay informed, and we depend on you to make our work possible. Donate to power our nonprofit reporting today. Give now.