For 90 minutes Sunday afternoon a town hall played out at Washington High School in South Bend designed to be a first step in moving forward from the Eric Logan shooting.

Logan, who was black, died June 16 after being shot by a white South Bend officer.

For much of the 90 minutes, a nearly packed auditorium saw shouting and a meeting that at times devolved as people vented their frustrations with the South Bend Police Department, its policies, its history and its leadership.

Near the start of the meeting, South Bend Mayor Pete Buttigieg said he would send a letter to the U.S. Department of Justice asking for an investigation into the Logan case and SBPD's handling of it. Buttigieg told the crowd he did not know whether the feds would act on it. He also notified the prosecutor that he would like an independent investigator to take over the investigation into Logan's killing. That statement brought applause from the crowd.

Some in the crowd made references to the controversy that has plagued Buttigieg nearly the entire time he has been mayor - the case of the South Bend Police tapes. Some in the crowd interrupted the town hall by yelling, "Release the tapes!" 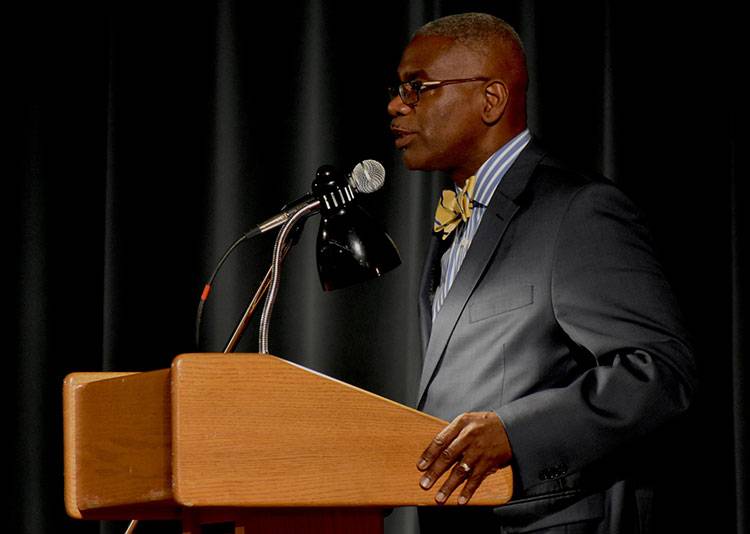 When it came time for Q and A with the audience, one of the first people to speak was Rev. Carlton Lynch from the National Action Network who identified himself as a representative of Rev. Al Sharpton. Many in the audience became angry at this, booing and yelling. South Bend Councilman Oliver Davis advised that at this point the room was "too hot" and that the local people should be allowed to talk.  At one point, in an effort to diffuse the anger, the President of the South Bend NAACP, Michael Patton, who was acting as a moderator, asked the group to pray.

One woman gave the mayor and police chief an ultimatum, reorganize the police department by Friday.

Buttigieg told the group that if anyone is a racist in the department and if it can be substantiated, "it is their last day."

Buttigieg also told the audience that "Chief Ruszkowski has my confidence." Some in the room were openly calling for Ruskowski's firing.

Buttigieg also outlined six areas where he believes changes could be made to improve policing. Those include use of force policies; body camera use policies; policies on investigating officer involved shootings (including looking at more civilian review and if state law is serving the city well); how citizens can file complaints about officers; training and the recruitment of more minority officers.

As for questions about the use of body cameras, Ruszkowski says that currently the technology does not exist for a body cam to automatically turn on when a weapon is fired. At one point, Ruszkowski said, "I am begging you, please help me change what needs to be changed."

Councilwoman Regina Williams Preston criticized the mayor for not seeking out more diverse opinions from within the African American community in South Bend. "You need to rethink who you think are the leaders in the black comunity. You are leaving an entire group of people out. African Americans are not monolithic," she said. She also asked for a citizen review board to be formed.

Audience members were given a time limit to speak and some got upset when the time ran out before they finished. One woman used her time to quote Bible verses and to talk about black on black crime. Another woman said she wants her money back as a South Bend taxpayer after having paid for police body cameras that are failing to be used properly.

There was a heavy media presence, including the national media. There was also a notable police presence in the auditorium.

As the town hall drew to a close, Buttigieg told those still left in the auditorium, "You can decide whether or not you believe in me, but I believe in you and I believe in this city."

The South Bend NAACP President ended with a prayer.

Tags:South BendSouth Bend Police DepartmentEric LoganPete Buttigieg
Support independent journalism today. You rely on WFYI to stay informed, and we depend on you to make our work possible. Donate to power our nonprofit reporting today. Give now.