Anti-hate groups from across central Indiana want to better track hate crimes in the state. The groups met at a conference Thursday to launch a hate crimes database.

“Indiana remains one of only five states without a hate crime law, so it’s a perception. People see that and think they aren’t welcome here,” Nelson says.

Rima Shahid, executive director of the Muslim Alliance of Indiana, says recent events in Bloomington and Lafayette have highlighted that feeling.

“I think that there is fear, there is a lot of fear within Muslims in Indiana, that if something happens, that we have seen happen, that those people are simply not charged accordingly to the hate crime law,” Shahid says.

Judy Shepard, an advocate and mother of Matthew Shepard, the gay 21-year-old whose 1998 murder spurred a national conversation about hate crimes, says her son’s death is exactly why Indiana needs that kind of legislation.

“And Wyoming had no hate crime law – and still doesn’t – so, there was nothing that they could do to enhance the penalty or even address the issue that Matt was killed solely because he was gay. That is an issue I have,” Shepard says.

The state Senate passed a bill in 2016 to make it an aggravating circumstance if a crime is committed because of an individual’s characteristics, such as race, religion or sexual orientation. That measure died in the House.

David Sklar, director of government affairs for Indianapolis Jewish Community Relations Council, says misconceptions about what hate crime legislation can and cannot do have been a stumbling block to getting legislation passed.

“It’s about this idea that, a crime is just a crime or in some way that we are trying to legislate thought process which is not the case at all,” Sklar says. “You are free to think anything you want until that thought turns into action, turns into a crime.”

Sklar says the Indianapolis Jewish Community Relations Council and other anti-discrimination organizations have modeled proposed legislation after Wisconsin’s 1993 hate crimes law, which went to the U.S. Supreme Court and was unanimously upheld.

House Speaker Brian Bosma (R-Indianapolis) endorsed the idea of a hate crime law in the wake of white supremacist violence in Virginia.

Tags:Indianapolis Jewish Community Relations Councilhate crimes lawCentral Indiana Alliance Against Hatehate crimesMuslim Alliance of Indiana
Support independent journalism today. You rely on WFYI to stay informed, and we depend on you to make our work possible. Donate to power our nonprofit reporting today. Give now. 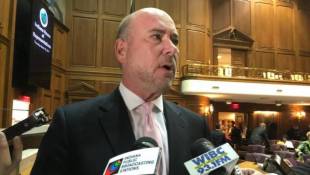 Bosma says judges can already consider a criminal's motivation during sentencing. But he says the state needs a specific hate crimes bill.