An Arlington High School football player was found dead in a car of an apparent shooting a few blocks just south of the Northeastside school Wednesday, the police said.

The death of the popular 16-year-old Jaylan Murray plunged the school into a state of shock and mourning. At the start of school Thursday an assembly was held to tell students that the junior was killed.

From there, the football team converged into a classroom to be alone, while other students gathered in the media center to talk with crisis counselors or create banners to honor Murray.

On one white paper banner, a black ink caricature of Murray was drawn with the nickname "Dredd Head" next to it. On another banner, a student wrote in cloud-like letters: "Rest in paradise."

Murray, who was easily recognizable from his shoulder length dread locks with dyed tips, was known for his smile and easy attitude.

He had a 3.2 GPA, was involved in the Upward Bound afterschool program and was set on attending college.

Murray was the father of an infant son.

“Oooh wee, he was carrying that rock that night,” Moorman yelled out as teachers mulled around after classes ended Thursday. “Dang!”

Like many, Moorman was struggling to accept Murray’s death. Last night, he said, he saw it as senseless. 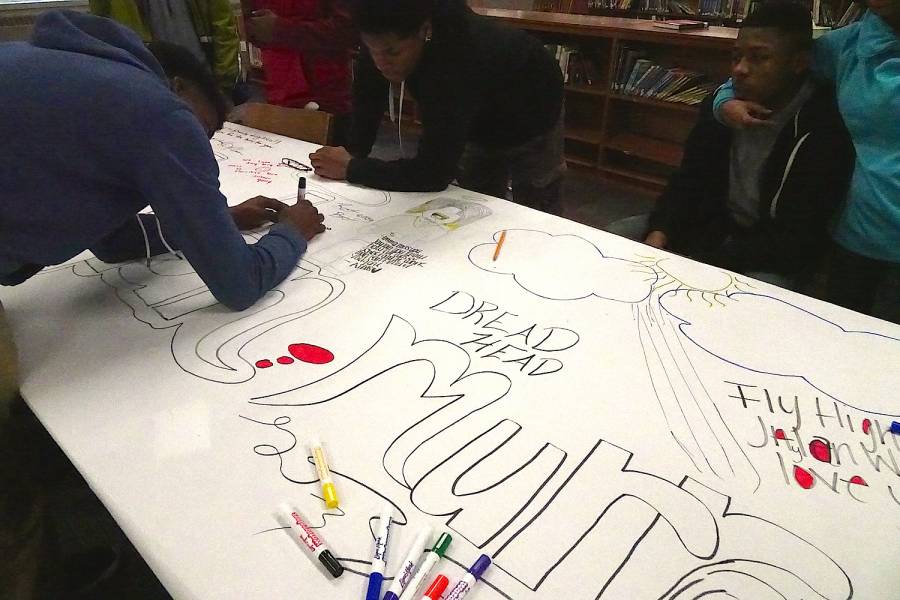 “Then I prayed on it. I thought about John 3:16 and it talks about God gave his only begotten son,” Moorman said. “We are sons of God -- so the death couldn't be senseless. That may be the sacrifice that helps the other kids at the school. This may be the wake up call.

Moorman said the football team would keep plans to travel to Ohio this weekend for a combine event.

Alyssa Helm, a senior who helped manage the football team, described Murray as the most honest person she’s known -- if you weren't looking your best, he'd tell you, not sugarcoat it. She and others cried in the hallway with staff.

“I mean, it’s part of life that people die. It’s just that it was him and how he died,” Helm said. “People are trying to take that in all at once.”

Parents, alumni and assistant football coaches descended on the school early Thursday to seek out students to comfort throughout the day.

Counselors from IPS offered an ear to anyone who wanted to talk. The district has a plan in place for this type of situation, yet, as one of the counselors said, "This never gets easier."

Extra IPS police were also called in for support, though no issues related to the shooting arose in the school Thursday.

For most of the day principal Stan Law kept watch along the school’s high school floor for trouble or students in need.

After Law got a call about the the death Wednesady evening, he then joined others at Murray's father's home.

Law said the shooting death of a student is sadly inevitable in today’s Indianapolis. Last year, the city hit a record 144 criminal homicides.

But that seemed at odds for Murray, Law said, who had just started a job, bought a car and had strong support outside the school from friends and some Arlington staff.

“Try to guide them, try to direct them, try to protect them from every angle. But you can only do so much,” Law said. “That is the unfortunate part to lose such a promising life at so young an age and in so violent of a way. It is just incomprehensible.”

Indianapolis Metropolitan Police Department responed to a call around 4 p.m. Wednesday near the Park Forest Homes in the 4400 block of Park Forest Court in reference an unresponsive male inside a car on the driver's side. Murray was pronounced dead at the scene.

A suspect in the shooting has not been identified. The IMPD investigation continues.

Murray is the second Arlington student to be shot to death this school year. Andre Green, 15, attended classes for one day before being shot and killed by police during an alleged carjacking on August 9, 2015.

Anyone with information about Murray's death is urged to call Crime Stoppers of Indiana at (317) 262-TIPS.

Weddle is spending the year embedded in Arlington High School to report on its transition from state takeover back to Indianapolis Public Schools in the series A New Day.