Efforts are underway to build a massive, multi-billion dollar research and industrial park near Lebanon, Indiana.

But as the project has grown, questions are being raised by both residents and the leaders of neighboring cities about what the project will look like - and what kind of resources it will require.

Brian Daggy is a homeowner in Boone County who has grown increasingly worried about the proposed district’s movement towards his house.

A neighbor’s property lies just beyond the fence that encircles Daggy’s backyard. He says it was recently purchased as part of a planned annexation that will put Daggy’s house right next to the city’s Limitless Exploration/Advanced Pace, or LEAP, district.

The district is currently projected to cover anywhere between seven and 10 thousand acres, and could house a variety of industries. So far, only Eli Lilly has announced its plans for a more than $2 billion manufacturing facility.

The state is in the process of buying up properties all around the area. The city of Lebanon is annexing those spaces, with plans to bring them into the LEAP district. Daggy doesn’t hold any ill will for his neighbors who have chosen to sell. But he worries about his own future – given his plans to retire in his house here, not far away from grandkids in Indianapolis.

“You always think about what your perfect place would be, and this hit enough boxes that we were pretty happy with it,” he said.

But he now wants to know what’s planned for the LEAP district - to be sure it’s something he can tolerate.

“If they plan to put a green park area in around some of this, maybe it’s something we can live with and we’re happy with,” he said. “We just don’t know. It’s the unknown factor that really annoys people. The state just hasn’t been transparent about this.”

Daggy is part of the Boone County Preservation Group, made up of community members who have organized against the LEAP district. Some, like Daggy, just want more clarity about what will be done with the land around their property. Others want to halt the project outright. That’s something Daggy admits he doesn’t see happening.

“You can’t stop progress – we understand that,” he said. “What we would like to see is them being transparent. Talk about what the plans are, let us make our own ones.”

When reached for comment on questions of transparency, chief operating officer and chief of staff for the Indiana Economic Development Corporation David Rosenberg said in a statement that the Lebanon project is still “very early on in the process.”

“Some may perceive that it’s [the project] far down the road,” he wrote. “But in reality, we are still at the beginning, and we’re working closely with commissioners and the community as things develop.”

That sentiment was echoed by Lebanon Mayor Matt Gentry, who said he doesn’t understand how some community members are responding to news about the project. From Gentry’s perspective, the city has been transparent.

“That’s where I’m a little frustrated,” he said. “They know about it literally the day it happens, but they are accusing us of not being transparent because of information we put out.”

Gentry said complaints about transparency have struck a chord with him because his parents live within the district likely to be impacted by the development.

“My parents live out in that area,” he said. “I’m not throwing these people to the wolves. We’re trying to figure out what works for everybody.”

Those answers still aren’t enough for Daggy. He points out that there are questions beyond what might be placed in the district - including how the project will be supplied with water.

“It smacks to me that they are just moving forward without giving much thought to how the impact’s going to be, and how they are going to address all those issues,” he said. “It’s not a good way to do a development.” 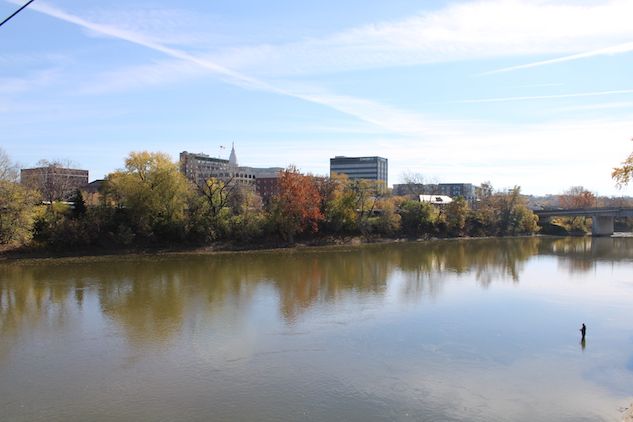 Daggy is not the only one who wonders how the Lebanon industrial district plans to manage its water supply.

Up in Lafayette, a 45-minute drive north of Lebanon, the community has begun to ask for details about water use – specifically, the possibility that water will be piped from Tippecanoe County down to the Lebanon area.

Lafayette Mayor Tony Roswarksi said he’s concerned by some reports that it could total as much as 100 million gallons a day. For context, one million gallons of water could fill a swimming pool roughly the length of a football field.

According to state officials, Lebanon is part of a region with “long-term water availability” concerns. That poses a problem for the types of research, tech, and manufacturing industries the city hopes to attract.

Roswarski said he’s not opposed to economic growth - but he is protective of water in the area. He said whatever plans eventually materialize, he will ensure that regional leadership will be a part of the decision-making process.

“I think we need to look at, in our regions – as a whole state, how do we ensure there is adequate water supply for everyone?” he said. “Not just taking from one place to the other that might end up not just hurting that area, but a whole other region around it.”

But Gentry said that when it comes to water, individual counties don’t get to own it.

“Water is a state resource,” he said. “As long as you are not negatively impacting your neighbors, you can use the water for your needs.”

That’s doubly true, Gentry said, because he believes once the Lebanon LEAP project is complete - it will help everyone.

When asked for comment on the state’s water use plans, David Rosenberg with the IEDC said that it was “too early to confirm specifics” but “there are multiple options on the table.”

Jack Wittman, lead water supply analyst for the Lebanon LEAP project, agreed to answer written questions about which methods are being explored. According to Wittman, the state is looking to draw water from the Wabash Alluvial Aquifer - directly connected to the Wabash River. Exactly how much will be drawn from there is still being explored.

“The total amount is yet to be determined, we are currently conducting hydrogeologic studies to determine the sustainable yield for high-capacity wells along the river,” Wittman wrote. “The final amount will be determined after those studies have been completed and confirmed by various state agencies.”

Once the studies are complete, Wittman said the state will use that information to identify key locations to place wells.

“This data will be used to arrange the well to minimize any long-term impacts to other water users [emphasis Wittman’s],” he wrote.

Wittman also pointed out that construction of any pipeline is still “some time away” as the state conducts a water study and assesses the engineering and design for that project.

Loring Nies, professor of environmental and ecological engineering at Purdue University, said he’s puzzled that the state doesn’t have a clear picture of how much water it needs to use as it goes about its studies.

“That seems to me like – how can you do a study if you don’t know how much water you want to take out of something?” He said. “Somebody has to have a proposal, because they are planning an industrial development with firms that need water, and the firms know how much water they need.”

Nies said the big question that needs to be explored is how taking water from the aquifer might impact the Wabash River.

“The Wabash River ecology is really important to the state,” he said. “We have a lot of native species that are endangered, we’ve even lost some mussels – we need an ecological assessment in addition to an engineering assessment.”

Nies, like Roswarski, underlined that he’s not opposed to economic development - but wants to be sure that the LEAP project is designed with long-term water sustainability in mind.

According to Nies, Indiana as a state is water-rich. He said the Lebanon LEAP project might be a chance for the state to really evaluate the water resources it has - and how best to use them.

“We don’t have a good picture of the level to which we are already using our water resources,” Nies said. “If you don’t have a good grasp of that, it’s easy to keep thinking you can expand economic development as if water supply is infinite – when in fact it is not.”

In the face of concerns, state and local officials attached to the project have repeatedly underscored that the project is still in its earliest days.

Gentry said he understands the desire for a final, complete plan upfront.

“We are in the first year of a project that could take more than two decades to build out,” he said. “As with anyone in this situation, you want the - ‘What is the final plan? Where are the roads going to be? How is this going to happen? Show me a map that I can look at.’ It doesn’t exist.”

Gentry said the project could still change, which is why the city has been upfront about what they do know.

“I’ve been trying to explain that to members of the community for months,” he said. “This is early stages, this is still in development. This can still change, too, based on market demand… this isn’t like every ‘i’ is dotted and ‘t’ is crossed. They want that level of definition, and when I say that doesn’t exist yet, they think we’re hiding something.”

“I understand that there is uncertainty and they want more clarification and definition,” Gentry added. “But they also have to accept when we tell them the truth of what we have and what we don’t have - that we are not lying to them.”

Daggy, at his home in Boone County, said he does believe the state and city don’t have a clear picture -- but wants them to understand that leaves community members like him with an uncertain future.

“My wife Peggy and I have talked about the fact that at our ages -- Peggy’s retired, and I’m at that age where I could -- if we have to move again, we don’t want to have to wait another five years to do it,” he said.

Tags:LebanonLEAPTony RoswarskiMatt GentryWabash RiverBoone CountyEli LillyBoone County Preservation GroupLafayetteTippecanoe County
Support independent journalism today. You rely on WFYI to stay informed, and we depend on you to make our work possible. Donate to power our nonprofit reporting today. Give now.