Betsy DeVos -- President-elect Donald Trump’s choice for education secretary -- is no stranger to Indiana politics or its education policy battlefield.

The prominent Michigan Republican is a proponent of private school vouchers. As chairwoman of the American Federation for Children she has overseen political contributions to expand private school vouchers, education tax credits and charter schools access around the country. (Chalkbeat Detroit has a great primer on DeVos here).

In Indiana, the American Federation for Children PAC has given $1.3 million in donations focused mostly on those efforts. The 501(c)(4) organization describes itself as: “a leading national advocacy organization promoting school choice, with a specific focus on advocating for school vouchers and scholarship tax credit programs.”

Instead of giving to individual campaigns in Indiana, DeVos’ group has focused heavily on one Indianapolis-based organization. 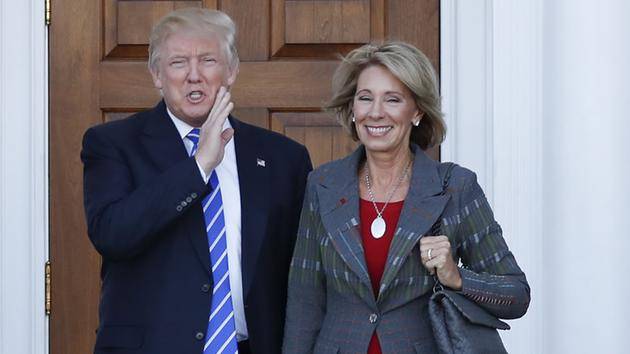 Since April 2010 nearly all of the contributions from American Federation for Children have gone to Hoosiers for Quality Education Political Action Committee, formerly known as Hoosiers for Economic Growth. The committee is chaired by businessman and school choice advocate Fred Klipsch.

Those contributions -- $1.225 million in total -- account for a third of Hoosiers for Quality Education Political Action Committee’s $3.6 million in expenditures since 2008, according to Indiana’s campaign finance database.

Betsy Wiley, Hoosiers for Quality Education PAC president, said the two groups are similar. Both have political arms that support candidates who favor private school vouchers and separate not-for-profit organizations that work to educate the public about school choice.

“They understand that policy making is political in nature,” Wiley said about the amount of financial support DeVos’ group has provided.

McCormick’s successful campaign this year to oust Democrat Glenda Ritz received $130,000 from the PAC, according to the most recent campaign finance filing.

Spending by the American Federation for Children in Indiana has long been documented by Doug Martin, the author of Hoosier School Heist, and at School Matters, a blog by former Bloomington Herald-Times education reporter Steve Hinnefeld.

Here’s our breakdown on how American Federation for Children donated $1,297,040.80 in the past six years:

Devos, under her own name, has donated only once in Indiana it seems -- $5,000 in September to Holcomb’s campaign for governor.

Devos is also head of Alliance for School Choice -- a 501(c)(3) organization that advocates for private school vouchers and other school choice options. She is currently head of the Windquest Group, a privately held Michigan-based investment and management firm and previously was chairwoman of the Michigan Republican Party, according to her website.

In 2011 Indiana passed a law allowing tax dollars to be used for private school tuition. The state Supreme Court upheld the voucher law in 2013.

Tags:campaign financeHoosiers for Quality EducationAmerican Federation for ChildrenBetsy DeVos
Support independent journalism today. You rely on WFYI to stay informed, and we depend on you to make our work possible. Donate to power our nonprofit reporting today. Give now.