It's no secret that Jennifer McCormick's win over incumbent Superintendent Glenda Ritz was a major surprise.

Republican lawmakers, operatives and staff on other campaigns told me they did not expect the Yorktown Superintendent to beat Ritz.

McCormick ran a quiet campaign with low name recognition that was also hamstrung by a lack of funding compared to Democrat Ritz who had $500,000 more in cash on hand.

Last week, a WTHR/HPI Indiana Poll had Ritz taking 44 percent of the vote with McCormick at 38 percent. The poll also found that 18 percent were undecided. 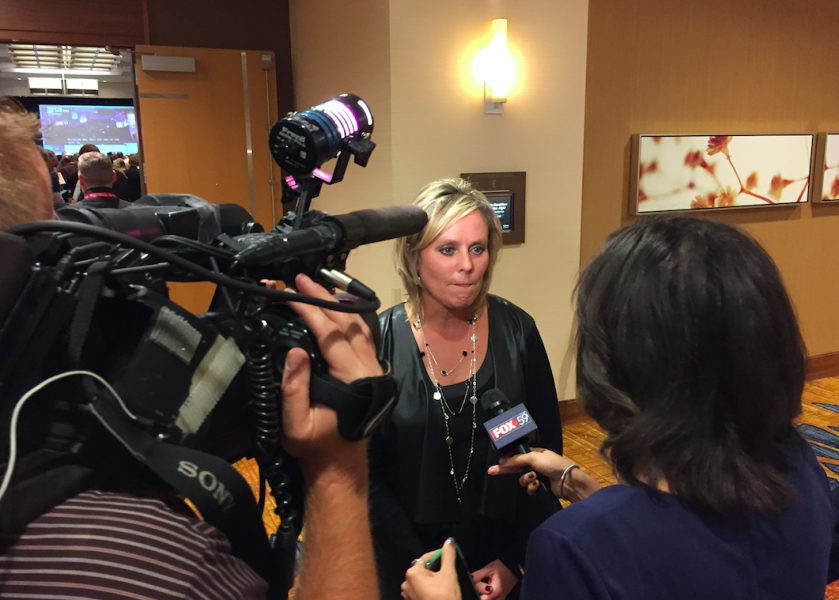 Shortly after the AP called the race for McCormick, I spoke with House Speaker Brian Bosma and House Education Chairman Robert Behning at the GOP's election watch party at the JW Marriott.

What are your thoughts right now about Jennifer McCormick's surprise win over Glenda Ritz to be state superintendent?

Behning: We are all excited about Jennifer. I don't think many people thought it was possible but it is a great victory for Jennifer.  As I've been talking to superintendents around this state there was a high level of frustration with the current administration. The Title 1 debacle, ISTEP implementation problems -- all of those things really (are the) responsibility of the superintendent and falls in their lap. I think there was a concerted effort obviously (to connect her to former Republican Superintendent Tony Bennett).

Jennifer did a good job of communicating her plan. But I think we are looking forward to moving forward and what we can do as a team as opposed to work opposing each other.
It is an exciting day for schools and students and teachers in Indiana.

Is there one issue you want to work on with her in the next session?

Behning: There are a number of issues I think we will be looking at. Obviously pre-K is something the speaker and I are passionate about and want to see expansions. Assessments are going to be critical.

One of the things I hope to work with her very quickly on is the ESSA plans -- the federal government obviously passed the Every Student Succeeds Act. It requires that there be legislative and executive branch interaction as well as bringing all interested parties together. That has not been happening. I know a number of parties have reached out to Glenda saying "can't we come together in a collaborative effort -- other states are doing it." That has not happened. I know that will change tomorrow.

We will look at other programs -- teacher quality is something we need to be looking at. How we can increase the rigor and do something more to make sure our schools of education are doing a better job?

Last time there was a Republican governor and Republican superintendent -- Tony Bennett -- the Statehouse worked to push through a lot of reforms that caused a backlash with educators and the public. Do you need to be careful and not push through more change again -- since the pace of policy change in the past eight years has been an issue in this election and one that even Jennifer McCormick has voiced concern for?

Behning: 2011 was a big year where we made a lot of significant reforms. We've already established Indiana as a leader in terms of reform. I think we will continue to look at ways to improve education. But at the same time, I think we need to let the system catch up with some of the things and not try to move quickly. But I think we have to be thoughtful.
We are getting criticized by a number of people who think the ISTEP panel is not moving fast enough. But we got criticized because we moved too quickly before. So I think we have to reach a balance.

What type of relationship do you expect to have with McCormick in the upcoming legislative session?

So we are extremely thrilled to work with Jennifer McCormick -- a superintendent of a school corporation. A person who is not bringing politics to the position. We will work together to make it better for students, teachers and educators throughout the state.

McCormick has said in her campaign that in the past eight years, with Tony Bennett and Glenda Ritz, it has been very difficult time for educators since there have been so many policy changes coming from the Statehouse. Do you need to smooth things over with teachers and slow down on changes in the next year?

Bosma: We've done so many things for educators. We gave, in the last two sessions, the two largest increases in education funding in state history. We enacted the Next Generation Hoosier Educators scholarship for the next generation of teachers. We've done so many things. But honestly Superintendent Ritz detracted from those in so many ways and politicized them in so many ways -- it was a real detraction.

So we are looking forward to working together with Superintendent Jennifer McCormick.

Is there one issue you expect to work on with McCormick in the next session?

Bosma: House Republicans will bring a strong pre-K expansion program to the table. We've already announced that. The big issue is how we test children and how that impacts schools and teacher and families. We are going to work with Jennifer closely to make that a very efficient, effective measurement system.

Tags:Election 2016Glenda RitzTalking Out Of SchoolJennifer McCormick
Support independent journalism today. You rely on WFYI to stay informed, and we depend on you to make our work possible. Donate to power our nonprofit reporting today. Give now.