The Archdiocese of Indianapolis, in a statement sent Monday, says the issue is not about sexual orientation, but an expectation that all personnel in a Catholic school abide by church teachings:

"In the Archdiocese of Indianapolis, every archdiocesan Catholic school and private Catholic school has been instructed to clearly state in its contracts and ministerial job descriptions that all ministers must convey and be supportive of all teachings of the Catholic Church. When an individual acknowledges their ministerial role by signing their contact, the Church and her schools accept this acknowledgement in good faith.

This issue is not about sexual orientation; rather, it is about our expectation that all personnel inside a Catholic school – who are ministers of the faith – abide by all Church teachings, including the nature of marriage. If and when a minister of the faith is publicly not doing so, the Church calls us to help the individual strive to live a life in accordance with Catholic teaching. Over the years, we’ve walked with individuals and schools on many other issues that contradict Church teachings. Many individuals have chosen this accompaniment, and a few have not. In such a case, it is very difficult to part ways, but we readily honor the person’s dignity and decision."

Maureen Kesterson-Yates, who graduated from Cathedral, helped start an online petition opposing the decision that currently has over 6,000 signatures. She says some are questioning the school’s focus on one specific violation.

“I know that there have been a few teachers that have released statements about how, you know, I’ve been divorced once and I haven’t gotten my previous marriage annulled, or I live with somebody but we’re not married,” Kesterson-Yates says.

Cathedral High School did not respond to a request for comment.

Less than a week after the Archdiocese of Indianapolis split with a Catholic high school because it refused to fire a gay teacher, another city high school says it let go a gay teacher so it can remain in the diocese.

Leaders of Cathedral High School announced Sunday they terminated a teacher's contract because the teacher is in a same-sex marriage.

In a public letter, Cathedral's board Chairman Matt Cohoat and President Rob Bridges says it was "an agonizing decision" that came after nearly two years of back-and-forth with the Archdiocese and Indianapolis Archbishop Charles Thompson.

"Therefore, in order to remain a Catholic Holy Cross School, Cathedral must follow the direct guidance given to us by Archbishop Thompson and separate from the teacher," leaders write.

The Archdiocese could not immediately be reached for comment. Previously, it said teachers, guidance counselors and administrators are "recognized as ministers -- and ministers in their professional and private lives must follow Catholic Church teachings."

The Catholic Chruch does not recognize same-sex marriage.

Last week the Archdiocese of Indianapolis cut ties with Brebeuf Jesuit Preparatory School because leaders refused to fire a married gay teacher. School leaders say it's unprecedented for the Archdiocese to attempt to dictate who works at the school because of its independence and self-governance.

Cathedral has a different relationship to the Archdiocese than Brebeuf, say Cohoat and President Rob Bridges. The school is affilated with Brothers of Holy Cross and the bylaws state “the essential Holy Cross character of Cathedral as a Catholic high school shall be at all times maintained.”

Cathedral was founded in 1918 and was incorporated to be a Roman Catholic secondary school in 1972. The northwest side school is rated A for academics by the state education department. This past school year it enrolled nearly 1,100 students in grades 9-12.

The Archdiocese's request to Cathedral and Brebeuf comes more than a year after another one of its schools, Roncalli High School, did not renew a counselor's contract because of her marriage to a woman. A second Roncalli counselor has since said she also lost her job because of her same-sex relationship.

Tags:Archdiocese of IndianapolisBrebeuf Jesuit Preparatory SchoolCathedral High School
Support independent journalism today. You rely on WFYI to stay informed, and we depend on you to make our work possible. Donate to power our nonprofit reporting today. Give now. 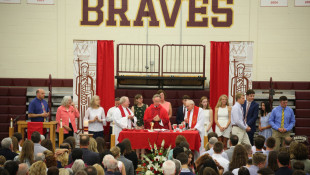 The Archdiocese of Indianapolis is ending its relationship with Brebeuf Jesuit Preparatory School because the school would not fire a teacher in a same-sex marriage.