Cheers and jeers -- that is pretty much how the responses to Gov. Mike Pence’s State of the State address are divided among education pundits, leaders and lawmakers. While some believe Pence’s proposal to increase charter school funding will benefit students and increase options for families -- others see it as a questionable bet. That is just one issue the Indiana education community is split on.

Read More: Nothing Hoosiers Haven’t Already Heard In State Of The State

Here is a selection of the reaction from Pence's Tuesday night State of the State annual address:

Todd Bess, Indiana Association of School Principals, executive director, raises the question that many school leaders are asking: how will the proposed funding increase be divided up and how will a new school funding formula impact urban, rural and suburban schools?

“Gov. Pence emphasized again that this will be an ‘education session’ and he is proposing additional dollars for schools.  The important part of this will be how the dollars are allocated so that all teachers and students benefit.  We would emphasize, too, that high schools are making career and technical education a priority and their accomplishments are one of the reasons graduation rates continue to increase.”

Teresa Meredith, Indiana State Teachers Association president, warns that Pence’s plan to raise the school voucher program’s limit on per-student funding and to give $1,500 more per student to charter schools may not benefit student achievement.

“ISTA asks policymakers to look at the data. Charter schools have been operating in Indiana since 2001 and today nearly 60 percent of them are graded as D or F. ISTA would like to see those funds go toward our community-based public schools. Pence’s $31 billion two-year budget increases school funding by 2 percent in the first year and 1 percent in the second year. Indiana has the fourth highest number of enrolled students per teacher and the fourth lowest expenditures per student in the country. ISTA recommends lawmakers increase funding to public schools by 3 percent in each of the next two years.”

Betsy Wiley, Hoosiers for Quality Education president and CEO, said Pence left no room for interpretation when it comes to his commitment to schools and families.

“Gov. Pence announced his intention to increase teacher pay by over $60 million, increase funding for K-12 education by three percent, eliminate the arbitrary $4,800 voucher cap and provide some capital funding for charter schools. This plan would expand quality education opportunities for all Hoosier students, whether they attend public, private or charter schools. With the leadership of Governor Pence and the State Legislature, we are confident that great progress will be made for Hoosier teachers, students and parents this legislative session.”

“Loaded with vast chunks of money for charter schools and voucher programs, the governor's school funding formula outlined in his state address is fuzzy math and doesn't leave much money for true and democratic public education.  Public schools -- already cash-strapped -- will be hurting more financially in the years to come. In plain English, Pence's plan is school privatization on steroids.”

"We are hopeful that through the upcoming session that funding levels between both types of public schools becomes more equal."

David Harris, The Mind Trust founder and CEO, was one of many education reform advocates applauding Pence’s decision to make education a central theme of this year's legislative session.

“His proposal to fund pre-K scholarships deserves special mention, as early education is imperative to preparing our students for school and career.  The Mind Trust has worked to open and support strong charter schools and to bring great teachers into Indianapolis public school classrooms.  We applaud the governor's call for additional support and funding for charters and to reward great teachers and we look forward to seeing these issues move through the legislative process."

“The governor prefers to drain resources from the classrooms where most of our kids learn. Instead, a substantial chunk of his plan leaks dollars away from most of our sons and daughters. Once again, the schools that have the constitutional obligation to educate all of our children are given the short end of the stick. This is why House Democrats demand greater honesty in how all of our schools are funded. Many people will hear that the governor wants to provide more state support. They may not even realize tax dollars will be siphoned away from hundreds of thousands of children.”

“Although many issues will be addressed this year, there is no more important priority for the House Republicans in the coming session than education. It is my hope that we can invest more funding in public education than is in the current budget. I was pleased to hear the governor echo this call for investment in Hoosier classrooms.” 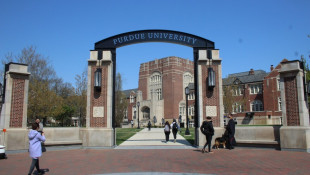 Some Purdue University professors are calling the process for selecting the school's new president "secretive" and a "disappointment."